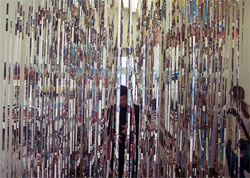 The entrance to the Stedelijk Museum Bureau was hung with strips of coloured paper, their dangling forms suggesting a beaded curtain in the doorway of a sun-soaked equatorial hideaway, or a tickertape parade for the latest President for Life of an obscure banana republic. Passing through them, it became clear that they were formed from the pages of late 1970s’ issues of National Geographic – flurries of rainforest swished by swatches of mountaintops, camera ads and brown, indigenous breasts. This was Mauricio Lupini’s Penetrable Diorama with Exotic Landscapes III (2005), a reinterpretation of the ‘penetrables’ of Jesús Rafael Soto, the icon of 1960s’ and '70s International Style Latin American art. As an overture to ‘Tropical Abstraction’ (curated by Roos Gortzak), a show concerned with the translation of Latin America into words and images, it was perfect. While Lupini’s piece literally tore the project of ethnography as infotainment to shreds, something of its aesthetic (and perhaps its ethics) remained. After all, aren’t the faded white pigment and clean-lined geometry of these flayed magazine pages exactly those of a dilapidated Modernist high-rise in Mexico City or São Paulo, and isn’t this something we take a certain type of problematic visual pleasure in?

In a text written in 1968 the Brazilian artist Hélio Oiticica bemoaned the fashion for ‘Tropicalism’, observing that ‘those who made “stars and stripes” [i.e., Op and Pop artists] are now making their parrots, banana trees, or are interested in slums, samba schools, outlaw anti-heroes’. This, Oiticica thundered, was ‘very well, but do not forget that there are elements here that [they] will never be able to consume: the direct life experience element, which goes beyond the image’. Gortzak’s exhibition had little truck with tropical fowl or fruits but did much to address the possibility of expanding images into more relational territory. Take Jesús Bubu Negrón’s 7 Dias en Igualdad (7 Days in Igualdad, 2004), a video documenting a project in which the artist worked with a community of impoverished Puerto Rican villagers to bring smoke back to the chimneys of their long-closed local sugar factory. No sugar was produced during this process (the chimneys choke on burning refuse), but Ingualdad’s smoke signals are more than a mere image of productivity – they are the deposit of the villagers’ newfound belief in their ability to achieve.

In contrast to Negrón’s video, other works in the show took superficially coherent cultures or locales and dissolved them in a sea of stories. Armando Andrade Tudela’s Sculpture Fragments (2005) was a remake of an anonymous Modernist sculpture erected in Peru some 35 years ago as a monument to the pre-Inca civilization of Chankillo. Doubtful that the original piece’s abstract cube forms could appropriately represent the complexities of a disappeared past, Andrade Tudela broke his version down into several parts and scattered them throughout the show like archaeological relics, or memories that might be endlessly configured and reconfigured. Similarly Dominique Gonzalez-Foerster’s excellent Plages (Beaches, 2001), a film composed of a lyrical voice-over and a panning shot over a packed Copacabana Beach on New Year’s Eve, concludes with the words ‘Copacabana does not exist’. Of course it doesn’t. For every one of the revellers that experiences the beach’s vaunted poetic decadence, another is irritated by the sand in his shoes. ‘Place’ is made up of a million moments, a million subjective experiences. It is a plural fiction, but a fiction nevertheless.

Mental abstractions gave way to something much more material in the work of Gego, an artist who emigrated from Nazi Germany to Venezuela in 1939. While her geometrical drawings and wire sculpture at first glance resembled European Constructivism, they had an organic feel that refused, very subtly, the ordering principles of machines or architecture. Like Helen Mirra’s beautiful Sky-wreck (2001) – an assemblage of blue cloth triangles placed on the floor whose exhausted coloration spoke of a lifetime of being bleached by a hot, careless sun – their abstract forms seemed bound up with the experience of a particular heaven, a particular patch of earth. Here localism and internationalism (which is, in truth, merely an export-strength form of localism) were translated through each other, each insisting that it is the Ur-language, the mother tongue.

Not quite a time-and-place show, or an exercise in post-colonial finger-wagging, ‘Tropical Abstraction’ succeeded because it identified location as a set of stories to be both endlessly rejected and enjoyed. The spectre of Oiticica-displeasing (neo-)Tropicalism remained, sure, but that’s no bad thing. As Gortzak’s show demonstrated, images are not antithetical to ‘direct life experience’, but rather help give it its fascinatingly fractal shape.