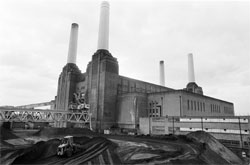 In the opening seconds of Alfred Hitchcock’s Sabotage (1936) – loosely adapted from Joseph Conrad’s The Secret Agent (1907) – the lights of London are suddenly extinguished when the subversive Verloc succeeds in stalling the power station at Battersea. A brief shot shows the gleaming turbine hall, with its monstrous cowled machinery spinning down. The image looks, today, less like a vision of Battersea Power Station’s long decline into dereliction than an allegory of the fading hope that it will ever be re-energized.
As I trek west along the Thames to visit it, the distant brick station – completed by J. Theo Halliday and consultant architect Giles Gilbert Scott in 1933 (who also designed the Bankside Power Station, now Tate Modern), and closed 50 years later – seems of a piece with generations of surrounding infrastructure: pale Victorian gasometers, a bruise-purple FedEx depot, the yellow blur of a Eurostar train and two rusted cranes that are frozen by the riverfront like a pair of oily, watchful cormorants. But once I skirt the shore to gain entry from a landward street, the station looks stranded, desolate, more the wind-whipped monolith I’ve glimpsed from passing trains. Behind billboards and fencing most of the ancillary buildings have been stripped away, leaving a mess of old pathways, foundations and rubble, ringed by a second fence and checkpoint, through which I’m driven by a representative of the present owners.

In the turbine hall of the western ‘A station’ the tiled classical columns soar to delicate balconies 30 metres above us. We are standing below the original floor level, where the guts of the machines would once have been. From there we cross into the boiler house: the huge central space of the station, from which both roof and floor have been removed. The steel skeleton of the building has been exposed and the walls shored up and cross-hatched with more metal, so that the whole interior is bristling, as if the station is intensely interested in its own structure.

I can’t resist the same suspicion of sentience as we ascend to the original control room. (A second, austerely metallic room, was added with the completion of the ‘B station’ in the 1940s, and a much smaller third in the 1970s.) Elegant bay windows give out onto the upper reaches of the turbine hall; the parquet floor is pristine beneath dusty cardboard; ornate skylights illumine the extant technology. A pair of walnut-veneered consoles stands sentry to the right: in their darkened glass tops I can just make out the labels that would once have lit up to warn of any malfunction.

A vast bank of dials and switches stretches the length of the room on the left: the brain of the station. The instruments are now stilled but enormously affecting: it’s like reading the log of a sunken ship, its last co-ordinates calmly recorded before disaster struck.

In a sense Battersea Power Station is far too satisfying a ruin: my tour ticks off too many post-Robert Smithson urban-edgeland motifs – ex-industrial monumentality, fading ultra-moderne, sullen little hillocks of meaningful rubble – to quite unsettle my prior sense of what the place would feel like. I keep wanting my guide to disappear so that I can get lost and summon my own spectres out of the alluvial depths into which the station is sunk. Surely, I keep thinking, there is something stranger going on here than is intimated by this easy frisson of nostalgic Sublime?

There is, but it is not to be found in the iconic outline of the power station, nor among the surrounding remnants of coal bunkers and pumping stations. Rather, it is back in the offices of the developers, Parkview International, whose spokesman projects a series of simulations of the building’s future. The station structure itself will become a shopping and leisure complex; a huge resort hotel will screen the site from the surrounding streets; luxury apartments are to be built at the eastern end; a further hotel and conference centre will adorn the waterfront. The four chimneys will probably be demolished and replaced with replicas: Parkview claims that their reinforcement has corroded. (Local pressure groups, and The Twentieth Century Society, remain unconvinced.) The more you learn about their plans, the less plausible they seem: they exude an air of impending catastrophe. That, after all, is what Battersea Power Station is for: to remind Londoners that even at the heart of the city the future is running down.

The project looks like something dreamt into being, only to be ruined: an entirely dispensable vision made of barely credible materials – the encircling hotel, for example, will be furnished with a trompe-l’oeil view: the adjacent gasometers will vanish, and guests will ‘see’ clear into nearby Battersea Park.
In the end the station itself could perhaps be made to disappear into thin air, to evanesce like the white smoke that once issued from its chimneys, thus absolving everybody involved of further responsibility.