Of the three main venues occupied by the Istanbul Biennial, the Atatürk Cultural Centre was the most resonant and contested 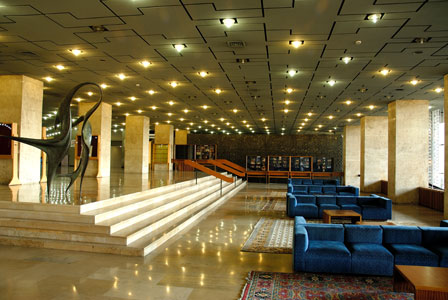 The feral cats of Istanbul can famously stop traffic with their imperious entrance onto the street’s stage, where they are doted over by flâneurs and tourists alike. So it’s no surprise, ducking out of the Atatürk Cultural Centre (AKM), where the tenth Istanbul Biennial is in full swing, to discover a tiny adjoining square apparently given over to the city’s beloved felines. I counted 12 lolling in the mid-morning sunlight: proud citizens of their very own late-Modernist civic space, lazily oblivious to the melodrama of aesthetic, commercial and political interests being enacted round the corner. AKM, site and subject of the Biennial’s address to the city’s architectural and cultural future, is also the image of a past that will not lie still.

Of the three main venues occupied by the Biennial, AKM was perhaps the most resonant and contested, as evinced by the title of the exhibition housed there: ‘Burn It or Not?’ In common with other buildings of its era that were conceived as arenas for top-down, state-sanctioned culture – Berlin’s doomed Palast der Republik is the obvious counterpart invoked by the Biennial catalogue – AKM is part Utopian ruin, part development opportunity. The perfect site, in other words, in which to reflect on Turkey’s ambivalent relationship to its Westernizing past and globalized future. But it was hard not to feel that the art on show there, for all its keen sense of the ruination of modernity and Modernism, risked looking tautological. I wasn’t alone, having been dutifully impressed, in wandering off to check out dead light fittings and dormant heating vents. AKM is not just a symbol: it is also, somewhat claustrophobically, the museum of itself.

The building is, in fact, the ghost of a former incarnation. An opera house was completed on the site in 1969; it burnt down during a performance a year later. The replacement, designed by architect Hayati Tabanlioglu with its latticed aluminium and glass façade, vast foyers, travertine floors and gleaming metallic interior walls was completed in 1978. Situated at the eastern side of Taksim Square (it is practically the only building that treats this politically charged palimpsest of civic, religious and commercial structures as an actual square), AKM has since become a nexus for competing visions of late-20th-century secularism, Westernization and state-subsidized culture. Threatened now with demolition – the reasons advanced range from its cultural obsolescence through supposed financial good sense to its apparent vulnerability to earthquakes – the building may well be sacrificed in advance of Istanbul’s becoming a European Capital of Culture in 2010.

Little of this controversy directly impinges as you wander around AKM. In fact, obscurity reigns: all the lights have been switched off, which helps when viewing several video works but means that the sunlight pouring through from the square quickly thins out and finally gives up as you try to get a sense of the deeper reaches of the building. No amount of polite entreaty on the part of Biennial staff will convince the security guards to let me explore the auditoria or descend darkened stairwells to the offices and storage space beneath. Apart from a dispensation for the Biennial, the building is closed for the summer, and so instead I hang around the first-floor foyer, where the huge hanging light fittings are gathering dust and the display cases and notice boards are all empty. Nearby, a security guard has crept into the shadows and fallen fast asleep.

And yet AKM, which looks as though it has been left to die, and which even at the height of the winter opera season is darkened and unused during the day, is also the most public of the buildings in Taksim Square. Even a fleeting visit confirms that its plaza is where teenage couples arrange to meet, aimless smokers dawdle and old women pause to take pity on one-eyed cats. In short, it is part of the life of the city in ways that the republican monuments of the square, or its monstrous international hotels, have never been.

Which is not to say that whatever Utopian potential the building once had can simply be resuscitated in the face of global capital and anti-secular politics. AKM looks out onto a square where 38 people died in 1977 and where still no May Day demonstration is without its casualties. None of that history is likely to be erased by finding a new use for a fading Modernist opera house, however redolent it is of gleaming futures past. With its alluringly dilapidated 1970s’ fixtures, AKM certainly feels like a time machine. But what if the value of a modern ruin (which is essentially what AKM is, though still intact) did not lie in its ability, fully restored, to redeem the recent past? What if its significance lay instead in its power, by its very anachronism, by the extreme confusion of its historical referents, to put the square’s future (Burger King, Hilton, shining metal minarets and all) productively in doubt?