Turning So Many Corners 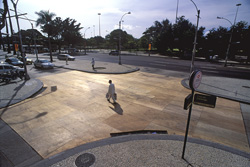 If you don’t know Los Angeles, listening to Renata Lucas’ description of it will give you the impression of a city in which every building is a body at once reflective and refractory. Last winter the artist visited REDCAT gallery to work on her forthcoming project there and in the process caught a glimpse of a sprawling urban landscape punctuated by intensely shining façades. The southern Californian sunlight makes the innovative construction materials used in LA architecture (titanium, variously treated glazed surfaces) reflect their luminosity onto neighbouring structures and objects. This vivid image recalls, however tangentially, the experimental ‘orgone accumulator’ machines designed by Wilhelm Reich in relation to his unorthodox therapeutic theories about capturing and reflecting the radiant emotional energies of his patients. A ‘bio-social’ psychiatrist of the early 20th century, Reich paved the way for later ecological movements and inspired the generation that came of age in the 1960s with the motto ‘no social revolution without sexual revolution’.

In Lucas’ particular case, establishing close relationships of affection and communication has always been the starting-point, from which she then negotiates the construction of her work. To anyone who has watched a body breathing, those glittering buildings in LA convey the atmosphere of a city endowed with permanent energy, in which property speculation is as much a part of the whole picture as the experience of death. A project by Lucas is always preceded by a process of research and investigation into the site’s particular temporal, physical and geographical conditions, especially those that resist easy transformation: her works are always determined by the particular situation on the ground.

Even so, her artistic repertoire demonstrates a consistent approach, characterized by the desire to overlay, to multiply (as in Barravento, Leeward, 2001), to fold constructed space, to add (Comum de dois, Common to both, 2002 and the participatory Falha (Failure, 2003), or to superimpose one architecture over another (Mau Gênio, Bad Genius, 2002). The ‘time lag’ between perceiving and fully appreciating what is happening in Lucas’ work is a little like the delay Dan Graham forces on the observer with his glass pavilions. There is a hiatus between perception and comprehension, a small but noticeable gap, a suspension of reason. Visitors to her ATLAS installation at Galeria Millan Antonio, São Paulo, in 2006 could walk or drive past the gallery several times and seemingly find ‘no there there’. But there was a lot there, as it happened: the interior of the gallery had been opened up, as though turned inside out and made to submit itself to its immediate surroundings – the panel beaters across the street had been replicated, for example, and the gallery’s main exhibition space turned into an extension of its car park and garage. The wall marking the boundary between the gallery and its next-door neighbour’s garden was demolished, and the gallery effectively giving away a portion of its property, with the dwelling’s outer fence penetrating and splitting the gallery from one end to the other. In the process, once quasi-public space became private; who exactly ‘owned’ what was hard to establish. Gentileza (Kindness, 2005) was also based on the specifics of the space of an art gallery (in this case, A Gentil Carioca in Rio de Janeiro) and consisted in removing the walls between the gallery and the people living next door in Saara, the old ‘Arab’ quarter of the city. As radically invasive and labour-intensive as such projects are, it may be harder to overcome the invisible walls separating neighbour from neighbour than to effect the removal of visible ones. As Lucas says, ‘changing traffic is an act which psychologically alters interpersonal relations’.

Lucas’ processes have taken on a dual aspect: apart from creating their own form, they also reveal a desire to expose our communal transience, the arbitrary dismantling of the various layers that make a city disappear, reappear or fragment. Cruzamento (Crossing, 2003) was a particularly interesting project in that it appeared to create a ‘plaza’ by replacing the asphalt of a typical urban road junction with another material (plywood). Usually the artist employs materials already being used in situ – cement, bricks, etc. – but this time she clearly demarcated an ‘other space’ (as Michel Foucault might have termed it): for passers-by and for vehicles. This was no pedestrian crossing, and it resembled no public streetscape that anyone might previously have come across. It was a third entity, fragile and seemingly out of place, which subverted the statistics about traffic flow, car accidents and pedestrians knocked down while crossing the street.

We know there are cultural and political limits to private space.1 Opening up spaces within other spaces and creating intersections (as in mathematical set theory) corresponds to the will to displace what is rigid and fixed – i.e., to give flexibility to urban and institutional topography. For example, Gordon Matta-Clark’s phrase ‘rather than using language, using walls’ is not just a product of the artist’s grounding in architecture. A comment on one of his works, ‘completion through removal’, clearly unites both formal and behavioural directions: ‘Abstraction of surfaces. Not-building, not-to-rebuild, not-built-space. Creating spatial complexity reading new openings against old surfaces. Light admitted into space or beyond surfaces that are cut. Breaking and entering. [...] Rather than using language, using walls.’2

Scale brings intensity to the ground on which a work ‘walks’, evoking dance pioneer Martha Graham’s inhalation, contraction and exhalation movements. These are simple gestures that sometimes nonetheless have to accept institutional limitations. Lucas’ invitation to participate in Jessica Morgan and Catherine Wood’s ‘The World as a Stage’ exhibition at Tate Modern later this year has got her thinking about internal projects (how to remake the institution’s entrance) and external ones (perhaps grafting Brazilian vegetation onto the museum’s tamer European plantings).

In what was a main feature of the 27th São Paulo Biennial, ‘How to Live Together’, Lucas ignored Ibirapuera Park itself, because of the pavilion’s architectural restrictions, and instead took as her material the footpath on Rua Brigadeiro Galvão in the outlying Barra Funda neighbourhood (Matemática rápida, Quick mathematics, 2006). She built a new pavement over the existing one, duplicating lampposts, trees and flowerbeds. The subtle evidence of an ‘artistic’ presence could be gleaned in the superimposing of new pavement over old, the former deliberately demarcated at an oblique angle.

The street corner is a surprise. Not simply an abstract angle produced by a surveyor’s pen, it is where people stop to ‘throw talk away’ – a typical Brazilian expression meaning to ‘shoot the breeze’ in public. Caetano Veloso’s 1978 song ‘Sampa’ – an idiomatic contraction of São Paulo – has a famous line that translates into English as: ‘For you are the reverse of the reverse of the reverse of the reverse.’ The pavement remains a border between the private (the threshold of a house) and the public (the social arena). In the case of Matemática Rápida, the residents of Barra Funda, having been initially wary, tried to prevent the work from being removed at the end of the Biennial (they thought that the city hall, usually inattentive to their needs, was finally paying them some attention), but the city’s bureaucrats eventually defeated this example of what one might call, following Hélio Oiticica, ‘constructive will’.

Although there are certain affinities between their work, it is important to clarify that, unlike Matta-Clark, Lucas needs to collaborate with people in already active, working locations and not revitalize or alter uninhabited zones. Likewise, it is helpful to know that the artists Amilcar de Castro (with his oxidizing Cor-Ten steel structures from the 1950s) and Lygia Clark (with her pliable hinged Bicho structures from the 1960s) were the first to employ the concept of the ‘fold’ in Brazilian art, during the 1960s. Oiticica expounded on the importance of ‘splitting and unfolding the plane’. Lucas’ timely arrival on the scene renews both the local Concretist and Neo-Concretist traditions. She is taking rifts and gaps opened up by previous generations and expanding them into spaces where artistic control faces new challenges and perhaps greater social turbulence. ‘Turning so many corners.’3

1 For example, Miki Kratsman’s pictures from 2001 documented how the Israeli army burrows and blasts through the walls of private houses to pursue its enemies from one home to the next.
2 Gordon Matta-Clark: Works and Collected Writings, Ediciones Polígrafa, Barcelona, and Museo Nacional Centro de Arte Reina Sofía, Madrid, 2006, p. 89.
3 The artist, in conversation with the author. The term, often used to describe someone who has disappeared around a corner, has several different meanings, such as ‘folding’, ‘bending’, ‘changing direction’ and ‘multiplying’.

Translated by Alberto Dwek.
Lisette Lagnado is a writer and curator living in Sao Paulo; she was Chief Curator of the 27th Sao Paulo Biennial, and is editor of the online art magazine Trópico.