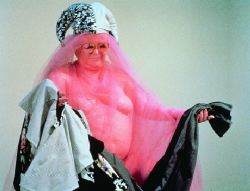 There's been a resurgence of interest in Latin American art. Recent historical survey shows such as 'Out of Actions' and 'Global Conceptualism' devoted large portions of their space to the work of artists little seen outside of South America and Mexico. 'The Experimental Exercise in Freedom' at LA's MOCA, which featured the work of Lygia Clark, Helio Oiticica, and Mathias Goeritz, and the retrospective of Brazilian Cildo Mereiles at the New Museum, have renewed interest in these seminal figures. Yet, so far, there has been little critical discourse seeking the answer to the most obvious question 'why now?'. With its presentation of the work of 16 younger artists from Brazil, Venezuela, Chile, Columbia, Mexico, Spain, and the USA, along with a comprehensive catalogue, 'Ultra Baroque' finally weighed in with a compelling argument.

Co-opting the oft-maligned 'Baroque' label, the exhibition argued that the very traits that left Latin American art historically marginalised in the West - excessive ornamentation, flamboyant stylisation, and disorientating use of space - were, in fact, direct responses to the colonial infiltration of indigenous cultures, and to the oppression and miscegenation that followed. The resultant hybrid cultures made art that, while emulating Mannerist tropes of Western painting, nevertheless appeared malformed to Western eyes. Yet, as Serge Gruzinski points out in his incisive catalogue essay, these paintings by both native artists as well as transplanted Europeans, represent some of the world's earliest examples of transculturation.

Outlining a genealogy that links this colonial precedent to today's young artists, 'Ultra Baroque' appeared to conclude that 16th-century Latin American art, with its
precocious use of pastiche, simulacrum, appropriation, and nascent multicultural politics, anticipated by four centuries our current, global, post-Modern zeitgeist. Shoring up this contention, much of the work in the show references the colonial era, employing hybridity as a method of resistance. Indeed, if gaudiness marked the Baroque period's inability to conform to 'refined' modes of expression, these 'Ultra Baroque' artists brandish bad taste as a talisman against oppressive visual regimes. Slyly misreading the lessons taught in schools (many studied art in the US or Europe) and mis-pronouncing the lines they have been encouraged to lip-synch, they have collectively settled on a 'native tongue' of malapropisms. Their visual language is contemporary 'anthropophagy', a Brazilian term for the consumption of foreign influences, and regurgitates idioms stolen from the street, the lecture halls, libraries, museums, churches, and Hollywood. Yet, while the ambition of these artists leads them to the hinterlands of culture for their source material, they seem determined to bring their work into the mainstream. (In this respect it is important to point out the differences between this generation and that of artists working in the 1960s and 1970s, specifically Clark and Oiticica, whose disdain and distrust of the art world led them to gradually steer their work into the realms of activism and psychology.)

This feverish mix of disparate references creates, in the words of Paulo Herkenhoff, a 'circularity where no one can tell who is influencing who anymore'. Riffing on
the strategies of early British Punk, their work short circuits dominant visual codes by creating a feedback of contradictory and detourned signifiers. It is in this context that the prolific output of myriad material - photographs, turkeys, paintings, tapestries, puppets, 'rancho' houses, baseball caps, psychoanalyst pietas, low-riders, and leaf-blowers - by Ruben Ortiz Torres and Meyer Vaisman, and the various guises - gallerist, photographer, rock star - of Miguel Calderon can be rightfully understood. Calderon's video, Male Prostitute (2000), which features a group of fucked-up Mariachis covering 'Anarchy in the UK', makes this strategy explicit. Like the Sex Pistols, Calderon pokes fun at the value of art even as he's banking on it. Similarly, Maria Fernanda Cardoso's on-going project, The Cardoso Flea Circus, resurrects an arcane carnival act to deceptively counter-cultural ends. Using live fleas, Cardoso's pin-head-sized performers purposely play against the grain of spectacle, presenting 'real' acts of impossible strength and agility that, without a magnifying glass, cannot be seen. Along more abject lines, Adriana Varejao's canvases reveal realistically rendered guts beneath Portuguese tiles, while Lia Menna Barreto's lizard-encrusted curtains recall the Baroque's fascination with the body.

Perhaps the most compelling work referenced in the show was the most unassuming: a run-down building on the dusty outskirts of San Antonio, Texas - the 'Infinito Botanica'. Founded by Marco Mondini Ruiz, the Botanica (now closed) was a gallery, mini-market, tourist trap, herbarium, bar, sculpture, and an ongoing performance. A fully formed 'Temporary Autonomous Zone', the Botanica succeeded by virtue of camouflage, concealing barbed critiques of class and commerce, art and race, sexuality and liberty while blending nicely into the surrounding urban fabric.

Replacing stasis with mobility, organisation with disorientation, unity with fragmentation, and understanding with emotional intensity, the Baroque inoculated humankind against an oppressively harmonious world-view. Now, at the start of the third millennium, 'Ultra Baroque' gives us a much-needed booster shot.