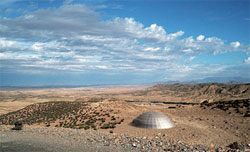 Visitors to the Universal Exposition in London in 1851 witnessed not only a phantasmagoria of commodity culture, nor merely the architectural wonder of Joseph Paxton’s Crystal Palace: they felt a subtle change in the air itself. The exhibition catalogue hymns ‘the only building in the world in which the atmosphere is perceptible […] to a spectator situated in the gallery at the eastern or western end, who looks directly before himself, the most distant parts of the building appear enveloped in a bluish halo’. This auratic union of industry and magic was also, claims the German philosopher Peter Sloterdijk, evidence of a global shift in the spatial embodiment of political ideas: from architecture to atmospherics. For Sloterdijk the Crystal Palace, like the palm houses that sustained plants from far-flung colonies in an artificial climate, resembles nothing so much as a modern parliament: it is a pneumatic machine for representing the world. Democracy, it turns out, is a matter of air-conditioning.

Sloterdijk – whose three-volume Sphären (Spheres, 1998, 1999, 2004) is an eclectic study of the nature of objects, substance, politics and art – has recently put this airy insight into satiric form. At ‘Making Things Public: Atmospheres of Democracy’, an exhibition curated by Bruno Latour and Peter Weibel at ZKM in Karlsruhe in 2005, he mounted a proposal for the Pneumatic Parliament, an imaginary inflatable outpost of Western democracy: ‘a parliament building that is quick to install, transparent, and inflatable; it can be dropped in any grounds and then unfolds itself. In a mere one and a half hours, a protective shell for parliamentary meetings is ready, and within the space of 24 hours, the interior ambience for these proceedings can be made as comfortable as an agora.

The transparent silvery shell of the domed building (which he pictures like a pristine alien craft, beamed down in a variety of desert landscapes) is, says its inventor, an image of the fragility of democracy and the tender state of mind of the newly democratized citizen. The blow-up assembly is ideally suited to such ‘sponsors of international terrorism’ as Iran, Libya, Cuba, North Korea, Syria or Sudan. Between 80 and 100 ‘failed states’ may be expected to join the Western ‘community of values’ in the next three decades; the Pneumatic Parliament allows them to adopt immediately the representative technology of their liberators and to seat up to 160 parliamentarians beneath its gleaming rotunda, bathed in the light of their new freedom. And if their prefabricated arena, air-locked from the outside world, seems somewhat detached from the sandstorms of political reality, then that is rather in the nature of the institution they have been sold. The chamber, to compensate, can always be infused with coloured air, to match the political climate of the country in question.

The Pneumatic Parliament is not just Sloterdijk’s fanciful stab at deflating some transparently flimsy assumptions at work in the rapid democratization of (most obviously) Iraq. It is also a conceptual device for discovering the pneumatic origins of modernity. Western democracy, writes Sloterdijk, has long depended on the notion of a hermetically sealed environment in which the representative voice of the parliamentarian can circulate in the pure air of debate. But the democratic bubble is a perilously delicate object: it might easily be contaminated by the very freedom it is built to protect. In 1868 James Russell Lowell wrote in his book On Democracy: ‘with the growth of democracy grows also the fear, if not the danger, that this atmosphere may be corrupted with poisonous exhalations from lower and more malarious levels.’

Air, declared Sloterdijk in a lecture at Tate Britain late last year, is ‘the last common property’; in the past century its ethereal substance has come to stand for the stakes of the political itself. In World War I, Sloterdijk noted, air became a weapon and a target: with poison gas it became possible to displace or destroy the atmosphere that supported the enemy. The modern idea of environment, as a habitat or resource to be protected from pollution, is a direct result of the building of protective greenhouses in the 19th century and the donning of gas masks in the 20th. Nor is art immune to the significance of air and atmospheric pressure: the famous photograph of Salvador Dalí in a diving suit at the London Surrealist Exhibition of 1936 is only the first example of an aerated art that continued in the work of Yves Klein and was maybe gently dispersed in Olafur Eliasson’s Weather Project (2004).

What Sloterdijk’s sarcastic suggestion – with its comic diagrams and preposterous simulations of eager mobs cheering the appearance of a democratic mirage – reminds us of most pointedly is the airtight bulwark between political power and its public. We are used, for example, to seeing vast photographic representations of the architecture of power. But the next time you look at photographs by, say, Andreas Gursky or Candida Höfer’s ‘architecture of absence’ or Luc Delahaye’s panoramic view of the UN, Security Council (2003), forget the` towering edifices and tiny human traces, and pay attention instead to the huge columns of overheated air that are enclosed there, and which you will never breathe.