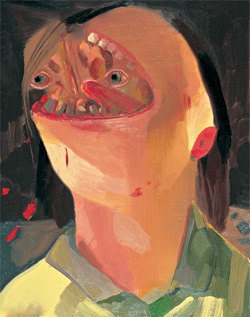 Imagine you are an artist. Your work is in a survey exhibition in London of American art at the dawn of the 21st century. The curators think the show will define a generation, eat the zeitgeist for breakfast and kick contemporary art’s tired ass right back to NYC where it belongs. They pump the show with steroid-enhanced publicity statements asserting ‘a firm case for the claim that the US has regained the right to be considered at the heart of all that is exciting, innovative, subversive and questioning in art today’. (When did America ever ‘lose’ this ‘right’? Does the UN decide it? Is there some international league table I’m not aware of? And what is this privilege anyhow?) Then they shove your work in the husk of the old Museum of Mankind, throw up some shabby temporary walls and flooring – presumably meant to conjure a vibe of radicalism in the raw, but that looks more like Dadrock in the buff – and call the show ‘USA Today’. If I were you, I’d be annoyed.

With the title ‘USA Today’, organizers the Saatchi Gallery and the Royal Academy were setting both themselves and the participants up for a fall. Regardless of opinion either way about individual works, these artists – 40 in total – were victims of boosterism. (By comparison, the touring exhibition ‘Uncertain States of America’, on display at the Serpentine Gallery around the same time, was more cautious in its sense of self-representation.) America is going through a deeply complex historical phase. It is a country divided socially, economically and spiritually; governed by the most globally reviled White House administration since the 1960s, and involved in a catastrophically messy war. To load all that baggage, and the responsibility of looking at ‘world events and America’s place in our global society’, onto work that is at best simple or unaffected and at worst simplistic or narcissistic was ill-advised.

What, then, was there to salvage from ‘USA Today’? Humour, handicraft, language games, even a certain cute charm – these were qualities found in both the most and least engaging works in the show. Matthew Brannon’s elegant screenprints – schematic images of vases and plants, collaged in 1950s patterns and pastel hues – flirt with a retro, Lucienne Day aesthetic, yet belie their pretty surfaces with cryptic titles such as Police Officer Giving Up and Sick Whore (all 2006); modest refusals to play along and surrender meaning. Equally, Dana Schutz’s ineffably bizarre and funny paintings of roughly-hewn figures do not give themselves up easily – imagine Paul Gauguin and George Grosz painting with severe heatstroke, and you get some idea of the thick, sick brushstrokes with which she constructs her cast of woozy characters. Although less immediate, Huma Bhabha’s Untitled (2006) sculpture – a dustbin bag-clad clay figure at prayer – worked to similar effect. Aleksandra Mir’s marker pen maps of America – Cold War and Real Estate Flowers (both 2005) for instance – also use lang-uage, but with a disarming immediacy reminiscent of the work of Sister Corita Kent, not least in the subtle political charge they carry. Matthew Day Jackson’s paintings and sculptures looking at American identity through its history and self-mythologizing are possessed of a similar homespun humour, though they would have benefited from a more immersive environment than the degree show-style exhibition allowed.

Subtlety was not a quality ‘USA Today’ possessed in great quantity. Dash Snow’s so-hip-it’s-killing-me work steeps itself either in Larry Clark-inspired grotty reportage (untitled photographs depicting his friends’ hazy, debauched nights out), or a kind of Conceptual Art 1.0 fed through a naughty adolescent mind – a grid of newspaper clippings each detailing some instance of police corruption entitled Fuck the Police, 2005. (That’s really going to bring the system down.) Banks Violette's sculpture is fine in its own way, but what is its purpose beyond the simple aesthetic appeal rock music equipment has anyway (that alluring combination of precision engineering and raw power)? Here he exhibited SunnO))) / (Repeater) / Decay / Coma Mirror (2006) – the drone metal band Sunn0)))’s gear, cast in salt. Sure, it looks great, but compare it to the physical experience of Sunn0)))’s mind-meltingly powerful aural assault, and it’s a little redundant.

Josephine Meckseper’s work consciously flirts with the dangers of ‘radical chic’ and the reification of political activism by fashion and advertising. It's a fair enough observation to make, however, the world view it presents seems all too black and white. In Untitled (2005), for example, a hooded mannequin is placed next to a reproduction of the cover of a book about the Angry Brigade – the anarchist group responsible for a number of bombings in Britain in the 1970s. To appropriate an organization borne of so many different pressures at a particular confluence in British history as romanticized ciphers of left-wing militancy is a debatable strategy. That’s probably the point, but as art or cultural analysis it’s just not enough to simply point at these things then bask in the reflected seditionary cool.

‘USA Today’ was not a show that did the artists any favours. What chance do they stand of their work being read on its own terms rather than through the prism of assumptions non-Americans might bring to it? (Imagine the British Art Show shown in New York rather than Newcastle – would all the work be read as being about homegrown jihadis and David Beckham’s move to Los Angeles?) American art is a complex, multifaceted, mutating set of activities. As far as I could see, ‘USA Today’ was not the USA today.