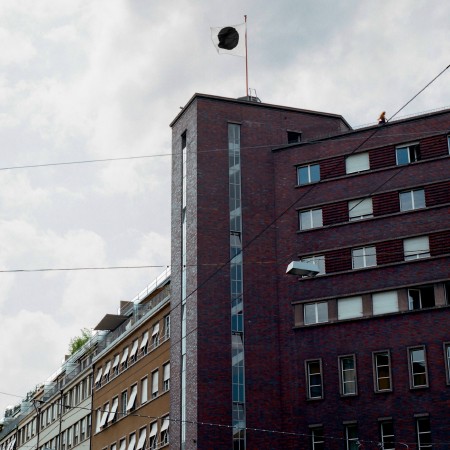 To the extent that art is about that which can be imagined, it has always carried a Utopian charge. Many group shows in recent years have been imbued with Utopian purpose by their titles, but whether the exhibited works truly contain such aspirations or whether they have been framed this way in order to reflect the aims of the organizers is open to question. In any case, by creating the exhibition title – ‘Utopics’ – out of the words ‘Utopia’, ‘topic’ and ‘pics’, curator Simon Lamunière deftly characterized the 11th Swiss Sculpture Exhibition in Biel.

Since 1991, this event, which was founded in 1954 by a local sculpture enthusiast, has been run as a themed show, with art projects spread across the city at various sites (squares, parks, streets and buildings). Walking along the charming route, which moves between the lake, the railway station and the old town of Biel, one soon noticed the many ruptures between Modernist buildings and industrial zones under redevelopment, indicating periods of economic prosperity and recession in this the centre of the Swiss clock- and watch-making industry.

Just above the old city centre, the barter-based gallery Ideally took up temporary residence in the guest wing of a large private house. The plainly furnished space was less reminiscent of a white cube than of a contemporary middle-class living room, including the obligatory scattering of tastefully selected antiques. The art works fitted well into this domestic setting: a number of framed drawings above the sofa; photographs and textile objects on the walls; a small sculpture on the Biedermeier table in the middle of the room. Like all the works in the house, the sculpture on the table could be acquired, provided its creator’s wish – ‘The work is to reside in a nice holiday house by the sea, so that I can pay it a visit now and then’ – was granted. In this economy of wishes, alongside piano lessons and the use of a horse for riding, there were also commissions for political research (sounding a little like homework assignments). The artists’ names remained hidden, with authorship reverting to the organizers named in the guide. The impression created was that of a slightly escapist, object-fixated brand of bourgeois living-room art. In spite of this, the project initiated by Annie Wu and Toni Wojtyra was one of the very few moments in ‘Utopics’ that really operated according to an alternative system – in this case bartering – while shunning the ironic tone found in much of the other work on show.

For example, when Nedko Solakov set up camp outside the station to petition for the abolition of plebiscites (Referendum, 2009), and one learnt from the information stand that this is just an ‘artistic reflection of Swiss democracy’ rather than an actual referendum, the work’s ironic potential goes no further than testing the gullibility of the audience – a dystopian vision of the future that neutralizes itself with irony rather than being realized. Forms of political organization were referred to in a number of other works. Fabrice Gygi (Untitled, 2007) and Ryan Gander (Didactease, 2008) flew erratic flags from prominent buildings: fictitious artist–states presenting their national emblems in the city. Something that possesses Utopian appeal as a concept – the idea of uniting all unclaimed territory as the ‘Kingdom of Elgaland-Vargaland’ (founded in 1992 by Carl Michael von Hausswolff and Leif Elggren) – becomes laboured and folksy when manifested as a brass band playing anthems in the city’s main square. A local handball club canvassing for new members nearby – entirely unrelated to ‘Utopics’ – seemed a far more credible assertion of social Utopia.

References to virtual space also come across as arbitrary: on a large hoarding next to a demolition site, skyscrapers of Cao Fei’s online urban landscape (RMB City, 2007–ongoing) rose up above the slogan ‘My City Is Yours, Your City Is Mine’; above the skyscrapers floated likenesses of Karl Marx and Mao Zedong, as well as of the artist’s avatar, China Tracy (Untitled, 2009). Named after the Chinese currency, the city’s districts feature traditional and contemporary Chinese buildings, and can be roamed freely at rmbcity.com with a Second Life ID. But in Biel the work felt either out-of-place or like a colourful collection of Utopian commonplaces.

Walking through Biel, it became clear why Liam Gillick, in a text published in 2003 and reprinted in the ‘Utopics’ catalogue, voiced such scepticism about taking part in exhibitions with ‘Utopia’ in the title. Referring to Theodor Adorno, Gillick concludes by arguing that the Postmodern irony of such shows discredits the potential of Utopian thinking from the outset, while he suggests rejecting ‘the assumption that any progressive movement is somehow Utopian’. Applying Gillick’s argument to ‘Utopics’, one can’t help but notice the many featured art works initially intended for a different context; either the exhibition was based on a false premise, or the premise of the exhibition was the wrong setting for much of what it has to offer.