Alpine aesthetics and Modernism; imitation and a boar’s head 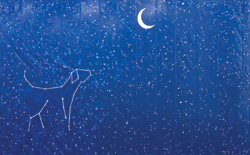 In his book The Invention of Tradition (1992), Eric Hobsbawm argues that many of the symbols and rituals Europeans hold most sacred are not proof of the unbroken continuity of culture, but rather the opposite; the more stridently a craft or rite stakes its claim to authenticity, the more it demonstrates a need to conceal the deep anxieties associated with industrialization, mass immigration and all the rifts that the 19th and 20th centuries perpetrated.

The ramifications of this thesis are deftly demonstrated in the work of Swiss artist Valentin Carron, many of whose pieces play explicitly on the conventions of Alpine aesthetic traditions. As the artist points out, Valais – the area of Switzerland in which he lives and works – is actually a region whose traditions were fabricated at the end of the 19th century: ‘At that point, a political desire to create a national cultural identity emerged. Slowly, people started making pseudo-authentic objects and formulating rules for the proper design of chalets.’ The endemic Swiss Style that is seen today is actually the result of a perverse evolutionary process that selects objects whose original design was wholly determined by the pragmatics of scarcity, and miscegenates them with redundant symbols of Swissness – from edelweiss to the Swiss Cross. Holzschnitt furniture and carved balconies, dry stone walls and festive dirndls all become artefacts (and therefore evidence) of an imaginary Switzerland that never was.

Carron’s work Château-Synthèse (2000) is aimed squarely against this sentimentality. It’s a bottle of wine synthesized from start to finish by Valais chemists, thus lacking an official certificate of origin and unable to carry any sort of regional pride whatsoever. For Carron ‘nothing is more global than local issues’, since it is at the local level that the effects of globalization are most immediate, most clearly felt. His taxidermied boar’s head in After The Hunting Rush (2002), severed from its body and planted on a wall, stands not just for Swiss culture, but for the fate of culture in general. What distinguishes the Swiss Alpine Style from the more arbitrary symptoms of the international trade in tourist kitsch is that, in a curious redoublement, it also appears in Swiss provinces – ‘Heidiland’, as Carron dryly refers to it – as a sort of reassuring décor, a local means of asserting identity.

Kitsch, as Clement Greenberg defined it, is the opposite of culture, a formulaic imitation of genuine cultural products that infects the healthy body of a society and replaces the good with the bad. In pieces like Authentik (2000) – in which the artist commissioned a local blacksmith, who specialized in signage for storefronts and chalets, to create a sign for him specifing only the letter ‘k’ – Carron undermines Greenberg’s model by demonstrating that it is precisely the search for authenticity that drives it away. Greenberg notoriously hated Pop art, but it is the only genre that evades this process, for by being intentionally inauthentic, it becomes (as Susan Sontag observed) camp. In Carron’s realm, irony is the only inoculation we have left against kitsch.

Had artists continued to make art according to Greenberg’s dictums, they would produce nothing but kitsch. It stands to reason that, in recent times, Carron, both in his collaboration with Mai-Thu Perret at the Centre d’Art
Contemporain, Geneva (2005) and in his solo shows at the Kunsthalle Zürich (2007) and Galerie Eva Presenhuber (2005), has turned to mining the archives of 20th–century art, subjecting it to the same awful alchemy that turns treasure into trash. L’homme (The man, 2006), a version of Alberto Giacometti’s original Walking Man (1947) – once an emissary of High Modernism but now, through overexposure and imitation, degenerated to an aesthetic refugee – flips the bird at his audience. Pop reinterpretations of Ferdinand Léger’s paintings, such as Fruits et Légumes (Fruits and Vegetables, 2006), are printed on tarpaulin strung on a galvanized frame, and look as if they were stolen from a café’s outdoor décor. Malicious parodies of banal, Modernist, Henry Moore-ish bronzes abound. Sculptures like Hate Eternal II (2006) are blatantly fake, made in Styrofoam and cast in a resin that advertises their lightness and transience.

Via his knock-off pieces, Carron has placed himself in a lineage that includes Marcel Duchamp, Andy Warhol and Elaine Sturtevant. Like Warhol’s Brillo Box works of the 1960s, Carron’s objects look mass-produced but are in fact handmade. The twist is provided by the addition of another layer; for kitsch objects are designed to look handmade but are in fact mass-produced, and so Carron’s appropriation of them brings us full circle, from art to trash to art again. It’s an act of necromancy that can only be partially successful, because it succeeds by being insincere, and so Carron’s objects sometimes seem almost ghoulish, haunting their prototypes for their failure to fulfil the promise of high culture to improve the taste of the masses.

Is Carron a cynic? The question cannot be answered outright. His work blocks the possibility of catharsis at every turn, and radiates a disenchantment that is contagious. At the same time, there is a sense that the frustration he induces in his audience is no different to the frustration he experiences: a genuine exasperation at the emptiness at the heart of contemporary culture.

(All quotes taken from an interview with the artist by Fabrice Stroun in the exhibition catalogue: Valentin Carron, JRP Ringier, Zurich, 2007)