A report from the 11th International Architecture Biennale 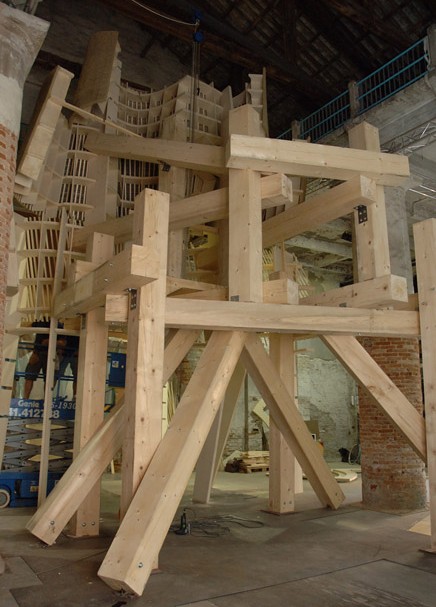 ‘Architecture must go beyond buildings because buildings are not enough.’ So proclaims Aaron Betsky, curator of the eleventh Venice Architecture Biennale. And, when charged with filling a sprawling 10,000 square metres of exhibition space, it seems like a fair comment. Boring old buildings just won’t quite suffice; damned as the outmoded ‘tombs of architecture’, they must be transcended at all costs.

Yet after traipsing through the 300-metre long morgue of the Arsenale’s Corderie, past a procession of one-liners from an ageing avant-garde, I was longing for a plan and section. Or at least an idea.

Betsky has filled Venice’s majestic old rope factory with a series of large commissions from a chosen group he has christened the ‘Masters of the Experiment’ – namely his old buddies Zaha Hadid, Frank Gehry and Coop Himmelb(l)au, who, judging from what is on show, have developed little since he brought them together for MoMA’s seminal 1988 ‘Deconstructivist Architecture’ show. The bloated relics of this ancien régime are offset by a handful of installations by a younger wave of ‘interdisciplinary multimedia collectives’, apparently set on pushing the latest techniques of interactive exhibition design towards no real purpose.

In an attempt to apply some theoretical gravitas to the formal whimsies on show, each piece is accompanied by a talking-head manifesto, often reminiscent of stilted lonely-hearts videos, as architects stumble over invented terms in an effort to impress. Next to Zaha Hadid’s ‘Lotus’ (2008), a convoluted tangle of a bed, desk and shelving entwined in sinuous fibreglass tendrils, Patrik Schumacher, the mathematical brain behind Hadid’s voluptuous undulations, robotically espouses the joys of ‘Parametricism, the great new style after Modernism.’ Conceiving buildings as a closed system of connected parameters, essentially designing through spreadsheets, this hallowed doctrine miraculously seems to produce the same kinds of twisting organic forms as Art Nouveau did a century earlier, only without the assured elegance.

The sense of being in a second-rate time warp continues, with other resurrected forms such as the ‘Feedback Space’ by Viennese provocateurs Coop Himmelb(l)au, an enormous inflatable jellyfish with throbbing LED panels responding to the heartbeat of whoever enters. Based on their ‘Astro-balloon’ proposal from 1969, the technology has apparently only just become available to realize a space with, ‘no physical ground plan, but a psychic one,’ where ‘walls no longer exist […] our heartbeat becomes space, our face is the façade.’ This was all quite compelling in the heady days of hallucinogenic sci-fi experimentation, when Archigram were plotting their floating, walking cities, and Superstudio were dreaming of continuous monuments, but now it lacks the original sense of political urgency and suggestive possibility. You can almost see the layer of dust.

But it’s not just the older masters who are trying to recapture a bygone age. Young Swiss architect Phillipe Rahm, whose work usually explores the hidden environmental aspects of humidity and temperature (sadly lacking here due to technical difficulties), has chosen to fill his space with hairy naked hippies lounging around playing the chimes. Only the joss sticks are missing from his quaint tableau.

Further along, Dutch mavericks MVRDV are back with another 1980s computer game-based urban design tool and an animation of their ‘Skycar City’, a banal rendering of sub-Blade Runner skyrise urbanism. This sits next to Gregg Lynn’s remarkably ugly furniture made of plastic toys cut and fused together with the aid of a robot. Presented as a heroic new way to recycle, the resulting objects look more like Jeff Koons squeezed something through a mangle.

An interview with Aaron Betsky

Breaking out of Betsky’s interminable corridor of lazy throwbacks, I was still holding out some hope for the Giardini. Mark Wigley, Dean of Columbia’s Graduate School of Architecture, was less optimistic: ‘It’s never a happy walk,’ he told me, ‘just look at people’s faces.’ And he’s got a point. The opening few days of this overblown extravaganza are indeed filled with fatigued faces and disillusioned stares, a symptom of the realization that architects are generally incapable of conveying a message with clarity and simplicity. Wigley is resigned: ‘You have to accept that most of the exhibits are bad, and then be completely surprised by the few that are good.’

Exterior garden and greenhouses at the Japanese Pavilion. Image © Designboom

And there were a few pleasant surprises. Junya Ishigami brings his weightless willowy world to the Japanese pavilion, clearing everything out and employing a ten-strong team to cover the white walls with immaculate pencil drawings of his poetic proposals for buildings in gardens. In these imaginary scenarios of cities organised in forests, fields and lakes, the plants are drawn in as much, if not more, detail than the architecture, suggesting a more egalitarian relationship between buildings and their surroundings – a subtle conception of sustainable growth, without the windmills and composting toilets.

Grassroots architecture gets a brief look-in too, with William Menking’s US pavilion dedicated to positioning practice in the context of its broader social remit, showcasing the Rural Studio’s US$25,000 house project as well as Teddy Cruz’s studies of the cross-cultural territory at the US-Mexican border. His work also creeps into the gargantuan Italian Pavilion in a room dedicated to practices that have hijacked Betsky’s theme of ‘Architecture Beyond Building’ to look at the social and political forces beyond architecture. Alejandro Aravena’s compelling projects with Chilean communities are exemplary in redefining social housing as an investment not an expense, developing an adaptable prototype to engage the residents in adding value to their own homes.

Perhaps the most provocative work on show, and the best critique of the Arsenale’s debauched funfair of contemporary starchitecture, can be found in the Polish pavilion, curated by Grzegorz Piątek and Jarosław Trybuś, which speculates on the future lives of six high-profile new buildings in Poland through impeccably doctored large-format photos. In 2047, with the death of books, Warsaw University Library becomes a temple of commerce, an SOM tower is transformed into a vertical cemetery, while a curvaceous Foster office block is reconfigured as a panopticon prison. Even the pavilion itself has been transformed into a hotel as a critique on the Giardini’s vacant state for much of the year. But it’s a brave step. ‘International exhibitions are based on an outdated principle which obliges every country to feature its showcase accomplishments,’ argues Piątek – ‘we have created a perverse antithesis of national promotional activities abroad.’ And in their dark dystopian scenarios, in which the forces of cultural change inevitably supercede the sluggish mechanisms of architectural production, there is a challenge to Betsky and his cronies; that architects need look not beyond building, but beyond their own navels.