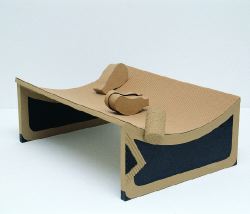 Vincent Fecteau's first solo exhibition in London was a display of six sculptures on two tables, divided into a black, and a white and beige section. Each object seemed to suggest something functional, either its own size or much bigger: a skateboard ramp, an archway, two chambers, an open book, bookshelves, and an antiquated perspective instrument. In other respects, the hazy suggestion of things other than themselves means that Fecteau's sculptures (all Untitled 2000), make none of 'proper' abstract art's claim to purity. Instead, by edging a modicum closer to actual things, they remind us of our failure not to project a carrousel of figurative associations onto the most supposedly non-referential artwork. Even Anthony Caro acknowledged this human foible in work such as his brown-painted, welded steel composition The Horse (1961), which is, well, quite horsey. Somehow Fecteau's diminutive, decidedly odd, homey constructions emit an Oedipal murmur which references Caro's heavy metal - and Tony Smith's and Richard Serra's, for that matter. If 1960s sculpture is a shoe, then Fecteau is itspebble.

The sculpture closest to these precedents is a black one that describes the skeleton of a cube. Yet, its perspective is exaggerated and each of its beams is an elongated, squashed octagon, and the corners on one side sport somewhat wonky... ears. The sculpture half sits on some squat cylindrical feet, which have been painted silver, in elementary brushstrokes. And this is the easiest work to describe.

Some of the tease in Fecteau's work stems from their forms, or from their materials, but often from their paradoxical interplay. The black sculpture that suggests a book is somehow also suggestive of an atavistic Batman logo - instead of a rectangle split in two down the middle, each side of the open 'book' forms sharp edges. There's no real colour separation in the black paintwork. Instead, the planes are divided diagonally into matt and glossy triangles that appear to begin to say something, only to demur. It's basically painted cardboard, except for barely visible layers of papier mâché, though these tiny accumulations do little more than add the slightest of textures. Beige lines, like lengths of rope, are drawn up the 'spine' around the back, and are continued by the beige of two lollypop sticks up two more irregular 'ears' made from polystyrene.

As ever, the geometry is snagged, little by little, at every turn. The length of the ears may be determined by the lollypop sticks- placed just so, their rounded ends left lovingly intact - but their heights are different. And anyway, what are we doing worrying about triangles, foamcore, papier mâché, lollypops? To cap it all there's a rubber band simply hanging from a screw, a moveable element we're really not sure what to do with. The same could be said for the pine cone sitting like a silly jailbird in the corner of a third black sculpture that resembles a double dungeon; or two leaf-shaped homemade cardboard boxes on what looks like some kind of skateboard ramp on the other table. (It's funny to think of a collector fretting over losing these accessories.)

Somehow insufficient in themselves, and inadequate as a mode of representation for something larger (architectural models or toys, for instance), part of the unexpected quality of Fecteau's objects is the way they evoke a slightly pathological sense of authorship. Their introverted, deliberated, laborious weirdness suggests someone, probably institutionalised, who once saw tiny, grainy illustrations of Modern sculpture without knowing where or when any of it was made, or what it was for, information which they tried to recover through the piecing together of whatever simple, impoverished materials lay at hand. If too many artists these days rely on adding one and one to make three, Fecteau's quiet, compelling sculptures, that have the tug of a hang-nail on a nail-biter, are more like recurring fractions.