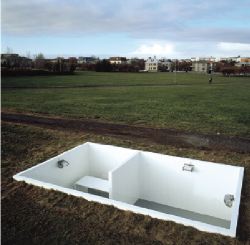 Space moves; the world is in motion. Economies propel it along, bodies traverse it, desires float and mingle within it. But then we notice how space can clam up and fade to white, as if exhausted, and how new types of behaviour replace others, now defunct. This malfunction is most often a product of the reproduction of space. In Michael Elmgreen and Ingar Dragset's work, a spatial challenge towards identity is combined with a transition from the inner space of subjectivity to the material realm of the body and social life.

Their most recent exhibition, 'Zwischen anderen Ereignissen' (Between other Events), was a white-out between exhibitions at the Galerie für Zeitgenössische Kunst in Leipzig this winter. Two unemployed housepainters, with the appropriate names of Dieter Rothe and Steffen Richter, were commissioned by Elmgreen and Dragset to paint the white cube white, over and over again, for the duration of the show. With soaring unemployment rates in the former East German city, the artists' intervention was framed by the notion of second-class citizenship. ('How does it feel to make art all day long?' a local reporter asked the two housepainters. 'Good. It is a job like at any other construction site', replied Richter.) Nothing was presented in the four large halls except for Rothe and Richter's maintenance activity and their props: transparent plastic floor covering, wandering cans of paint and mobile scaffolding. The masculine traits of the Modernist cube - logic, rationality and hygiene - were confronted in a mock affirmation of its surface: the thin but ideologically significant layer of whitewash. The exhibition space was activated in reverse through the obsessive reinforcement of the building's second skin. In fact, the white cube became so white during the course of the exhibition that it acquired physical bulk: seven weeks of paint application added a centimetre to the depth of each wall. The period of rest between shows was thus signified by the imperceptible growth of the gallery's buttressing.

I was reminded of an apocryphal anecdote about a polar explorer who, during a fierce snow storm, was forced to erect an impromptu igloo, barely any larger than his own frame. Lying on the floor, the air he exhaled with each breath formed another thin layer of ice on the igloo's inner walls, gradually threatening to immobilise him. His sad predicament was that if he didn't breathe, he wouldn't live; if he breathed, he couldn't move. In 'Zwischen anderen Ereignissen', suspicion of the claustrophobia of high culture was confirmed, while the wobbly qualities of the real pressed down through accumulated layers of white paint.

This is the paradox of contemporary art: without the white cube, you don't have a space; with it, you have an institutional affiliation that is restrictive. 'Zwischen anderen Ereignissen' was the blue hour of gallery routine - literally so, because the empty exhibition halls were exceptionally sensitive to changes in natural light. The walls may have been white, but they weren't toneless. In the first hall, the atmosphere was bluish from the light that fell from above through a galvanised floor; in the three other halls, the early Spring sun shone low and sharp on the plastic on the floor, reflecting flimsy caustics onto the walls.

When the walls are absurdly whitened - or repeatedly washed down only to be painted over once more, as in Elmgreen and Dragset's earlier Twelve Hours of White Paint (1997) - space is rendered powerless. Twelve Hours of White Paint described a volte-face of idealised, abstract masculinity: if the bare white cube signifies the naked and unadorned Modernist ideal of the male nude, Elmgreen and Dragset created a concrete sense of bodily drama in action, the white liquid streaming chaotically down the walls around them. With a single gesture, sites are sabotaged and prepared for the reception of an elusive presence; hierarchies are mimicked and then discarded in order to make way for individual identities and more subtle systems of signification. This was the case, too, with Cruising Pavilion/Powerless Structures, Fig. 55 (1998) in the Marselisborg Forest, a pastoral location near Århus in Denmark. The official ban on outdoor sexual activity was negotiated by this public art work: the darkened white cube became a place for trysts, an adventurous architecture awaiting bodily traffic. Glory holes in the walls combined an openness to intruders with the voyeur's desire to hide and watch. Cruising Pavilion latches on to the logic of Modernist space: white as a saint and dark as a predator. For Milton, a virtue that does not know vice is false virtue, or, as he put it, a false virtue possessed of an excremental whiteness, without colour or texture. The elegant, white virtues of Elmgreen and Dragset's aesthetic know, even encourage, vice. The environment most sympathetic to their work is perhaps the planned architecture of suburban projects that mushroomed in the late 60s. These concrete Utopias, with European names that have evil qualities, like those Pasolini assigned to dialects, water down identity.

I have a certain picture in mind. Imagine a slick, white bar that has been given an exclusive paint job and had all its functions reversed: the stools, skirting and footrests are on the inside, the beer taps on the outside. Its lacquered surface is the perfect backdrop for activity, just about any kind of activity. It is installed between grey concrete blocks and unthinking youth, and is gradually worn away by vandalism and graffiti - imprints of the flip-side of heterosexual domination of space, a slow and gradual process of entropy that is empathetic to the environment's grim character. Queer Bar/Powerless Structures, Fig. 21 (1998) is a stooge for anonymity and boredom, acknowledging that violence is sometimes a symptom of the need to create sites of enunciation for yourself in places that don't acknowledge you. Violence is the extreme conversion of an object, a stab at the wish for liberation.

Space in Elmgreen and Dragset's work doesn't announce itself, it has to be brought out, challenged by the mundane presence of the activities that frame it; it begs you to perform. Rather: it makes you perform, because it analogises several types of behaviour. There is violence in walking the wrong way down a one-way street, and in spasms of libidinal activity; just as violence was an integral part of Modernist architecture's denigration of negative space, and its totalitarian schemes for organising social space. Gay culture has been forced to convert settings reserved for other purposes - toilets, parks - into social and intimate spaces, and Elmgreen and Dragset go with, and against, this grain. While some of their environments solicit 'illegitimate' behaviour, others perform allegorical crackdowns on the functionality of queer coding. Queer space is being queered; the codes and routines that hold it together as a cultural arrangement are worn thin. This is in keeping with a process that implicitly questions what can be particularly 'gay' about any representation, when gay culture has gained relative access to the mainstream. This is shown to be the predicament of (sub)culture in general. To find yourself in Elmgreen and Dragset's displaced ambiences is to feel the pull of your identity.

On a horizon of external intolerance and internal division, purpose and destiny are exaggerated and undermined at the same time. Space is fucked up because function is fucked up. 'What are you about?', the works seem to ask. 'What does your desire hang on to?' On one hand, there is the suggestion of a fading 'we' that refers to the loneliness of violently separated identities; on the other hand, the sense of a failure to condense things into a representational logic that can speak for the coherence and relevance of group identity. The austere quietness of the gallery space is contrasted with the banal and disruptive process of 'maintenance'. The interiority of space (the idea that space contains things) is collapsed via insertions that slice through the membranes of public, semi-public and subjective spaces, destabilising their physical and ideological walls.

This strategy of spatial dislocation resulted in the seemingly arbitrary combination of site and space: the excavation of a gallery space in the landscape outside Reykjavik. Dug Down Gallery/Powerless Structures, Fig. 45 (1998) is a territorial parvenu, an inverted but still pristine emblem of Modernist over-determination, supremely indifferent to its surroundings. But you look down on an annulled gallery space - a sunken domestic space, in which the privileged gallery is displaced by nature and its perspective dwarfed. Elmgreen and Dragset work with space in its multiple understandings - as architectural space, subjective space, sexual space, art space, public space - domesticated in its displacements, repetitions and overlaps. Identities flicker and are gone, to appear elsewhere.