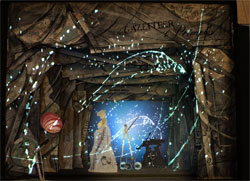 Admittedly, I arrived at William Kentridge’s exhibition with a lot of baggage. I just don’t trust art works that claim to deal with ‘collective memory’ without a bit of detachment. And dealing with emotional baggage is what I assumed Kentridge’s work was about. On cue, his theatrical production Black Box/Chambre Noire (2005) opens with the word Trauerarbeit, a term coined by Sigmund Freud to define the process by which the ‘labour of mourning’ eventually allows one to overcome loss: with enough recollection the survivor can re-create an imaginary version of the lost object. But doesn’t formulating or reiterating a theory of this process inevitably compromise the emotions involved by turning them into specimens for academic analysis? Kentridge’s work consistently grapples with concepts too deeply felt to be comfortably represented.

Black Box/Chambre Noire is based on an infamous event in German history – the colonization of a part of south-west Africa (now Namibia) where, in 1904, 75 per cent of the native population starved or died at the hands of the German army. The story raises the spectre of another mass extermination, collectively implicating the German audience from the outset. The message Trauerarbeit could be a ‘work order’ for the viewer – were it not for the fact that it is delivered on a makeshift paper sandwich board, held by a whirring, lamp-shaped robot. Kentridge represents the history of mass slaughter as a puppet show in a modest 19th-century pre-cinematic puppet theatre with wooden scaffolding, a decorated proscenium and a blackboard backdrop, making the work both magical – and horrible – to watch.

A series of six hand-fashioned mechanized characters (actually driven by computers visible underneath the box) take turns performing against a projected background of Kentridge’s own animated charcoal drawings and related archival film footage – diverse sources including documents from the national archive of Namibia, a student’s lecture notes on German law in 1911 and financial accounts of goldmines. Rather than creating a narrative, Kentridge reconstructs historical events through suggestive association and poetic allusion. In 21 minutes we see violence perpetrated against black men and women, children being killed, death lists and other reminders of unimaginable human treatment, but never straightforward facts or a definitive viewpoint. Labour is often linked to exploitation and death: an animated sequence of two men drilling or tilling the land quickly becomes two silhouettes beating a third man with clubs, accompanied by the sound of clashing cymbals. A black figure made of scraps of paper struggles to flee across the stage but is pushed backward by an invisible tide, and a wire-mesh puppet of an African woman mechanically doubles up with exhaustion. The subject matter may be loosely associative, but the resulting collage of music, animation, puppetry and imagery is a rare example of several media being successfully bound together. It’s too easy to get lost in marvelling at Kentridge’s technique for the play to feel like a history lesson.

Kentridge’s exhibition also included framed sketches and drawings, and preliminary sources and models for his sculptures. Instead of illuminating the play, the objects look like relics – theatre props after the play has ended. Nevertheless, as a contrast, they highlight the way Kentridge’s unique working process of repetitive drawing and spontaneous or indecisive erasure is perfectly suited to the shadowy histories he tries to evoke in his animations: we can’t linger on any single image for too long, as the sped-up movement whisks the violent images from one frame to the next. Things appear and disappear: a coffee pot becomes a skull, and a man’s portrait becomes a death mask. Children are executed, and a globe falls off its axis. Each drawing is instantaneously erased and replaced by the next.

Kentridge’s technique is a kind of literal history – objects are changed or resurrected, but not without leaving a physical imprint of what came before, casting a darkened charcoal shadow over the scene. The work doesn’t support nostalgia or prolonged grief, but it does give us an accelerated, brief impression of them, as every lost object is effortlessly transformed into a new one. One of the most powerful episodes to watch consists of archival footage of a man in a colonial hunting outfit shooting a rhinoceros, then watching the beast struggle until its stubby legs eventually stiffen in the air. The white hunter then prances over to his kill and crudely shoves a handful of leaves into the dead animal’s mouth. Later Kentridge touchingly resurrects the rhinoceros in a charcoal drawing; it performs a brief ballet, then gracefully leaps over the Trauerarbeit sign and walks off-stage unharmed. Kentridge’s piece suggests that, if art can’t alter our memory or replace what’s been lost, it can, at the very least, give that loss a form.