Without Boundary: Seventeen Ways of Looking 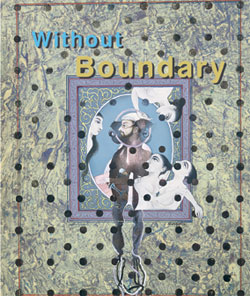 What really gets me about Without Boundary: Seventeen Ways of Looking is its fundamental, almost wilful, blindness to the conditions of its dated theoretical posturing – conditions that already threaten to overwhelm it. Although they do not seem aware of it, the three writers who have contributed essays – Fereshteh Daftari, Orhan Pamuk and Homi K. Bhabha – are all in one way or another complicit with new conceptions of corporate power issuing from the US and its global affiliates. Indeed their thinking about art bears a significant relation to the ideas that abound in the surfeit of marketing and management texts that stock airport bookshops – change management, open borders, flattened or post-hierarchical structures, for example. (I might even risk suggesting that the same could be said for a great deal of the claims made for art today.)

Published in conjunction with an exhibition of the same name at MoMA New York, the publication focuses on artists of the Middle Eastern Diaspora – those born in the East but now mostly operating out of metropolitan centres in the West. The book asks, how is their work Islamic? How is it not? What happens to an art located in the transition back and forth between home and another country, past and present, tradition and modernity? The 17 artists include well-known names such as Shahzia Sikander, Shirin Neshat and Mona Hatoum, alongside two famous Americans: Mike Kelley and Bill Viola. I assume these last two are there to underline the basic argument of the book: that the borders within which art and artists have been enclosed, whether formal, religious or political, must come down. No more polarities, no more binaries or simplistic oppositions. This is the art of the mobile global élite.

In her essay ‘Islamic or Not’ Daftari argues for a complex understanding of origin and the adoption of multiple perspectives. She finds in Sikander’s series ‘51 Ways of Looking’ an art that overflows borders and promises the ‘mutual intrusion’ of centre and periphery. Her essay is an exhortation to dispense with Modernist hierarchies and move to the ‘world beyond’. (Her piece ends with a paean to some vague form of New Age ‘spirituality’ – beyond creeds and cultures.) This is standard Postmodernist/post-colonialist ideology. It is eagerly rehearsed by the doyen of post-colonial studies, Homi K. Bhabha. who writes in his essay ‘Another Country’ about sites of ‘contestation’ and ‘resistance’, identifying ‘hybrid’ patterns of ‘cultural transmission’. The once very fashionable word ‘hybridity’ must appear at a rate of once every two or three paragraphs throughout the book. (Hybridity is not a bad thing per se, but nor should we assume that it is always good; isn’t Mad Cow Disease a Postmodern hybrid? And Avian Flu threatens to mutate into an enormously dangerous hybrid human–bird form.) The Turkish writer Orhan Pamuk, meanwhile, chimes in with a brief, melancholic piece about the pain of being in-between and being misunderstood.

This is the kind of detached thinking that can only be produced at great distance from empirical reality. I write this review just after the al-Askyria Mosque in Iraq has been destroyed, while US marines pick about the ruins of that country and the great artistic heritage of Mesopotamia is either stolen or destroyed. Sectarian boundaries are springing up everywhere. While some may indeed be without boundary, many others are finding themselves increasingly hemmed in. This is not the time for old ideas.