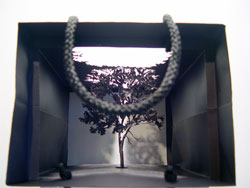 Yuken Teruya’s spry paper tableaux are an elegant illustration of culture in the shadow of capital. Using newspapers, old toilet rolls and shopping bags, the Japanese-born, Brooklyn-based artist creates self-contained depictions of nature that imply rather than reflect the real thing. Composed of equal parts shadow and light, his dainty flora tease out the drama and power in items so commonplace they barely register. Teruya tempers his fascination with corporate branding with a keen awareness of the toll our excesses levy on the environment. The result is a subtle and unresolved commentary on corporate hegemony in every aspect of modern life.

He begins with photographs of trees, which he transfers to his computer, superimposing this image on the logo-ed side of a shopping bag. Using the original shape as a guide, he deftly cuts a two-part silhouette – lower branches/trunk and leafy top – folding and twisting the two halves into the interior of the bag, rooting the trunk with a single drop of glue. The tree appears to have sprouted up whole inside the bag, strongly resembling the well-behaved real-life shrubbery that festoons corporate green spaces. Mounted horizontally on individual Perspex shelves, the mouth of each bag faces the viewer, the trees spotlit from above by the cut-outs, lifeless as specimens. In their delightful but petrified perfection the trees emulate exactly the corporate products that anticipate and even create desire without ever really satisfying it.

The chill interiors of LMVH (2005) – an array that included Marc Jacobs’ all-ebony tree, Chandon’s canary-yellow branches shot through with black (perfectly mimicking its shooting star trademark), Hennessy’s autumnal carton, its tree only half-emerged from the cardboard, and Dior’s ivory foliage – captured the hauteur this packaging is designed to emit. The 11 bags that composed the piece were set along one wall; the spacing uneven, it could pass for a group of swanky family photos.

Similarly high-end was Three Seasons (2005), the totes from Christie’s, Sotheby’s and Phillips respectively suggestive of autumn (pewter), spring (Impressionist polychrome) and winter (two festive crimson and silver trees). These are the elements of the art world ‘year’, with its all but royal implications of long, unfettered summer holidays. Like LMVH, from a distance Three Seasons becomes a family tree, the bags suspended like portraits or heraldic emblems in a regal hallway. Corporations have, after all, replaced the nobility in terms of status and patronage. Brands such as Louis Vuitton or Givenchy are practically celebrities in their own right, with a cachet that translates even to these receptacles of paper and string.

On the lower end of consumer pleasures were Happy Meal Crossing (2005) and Golden Arch Parkway (2005), groupings of various McDonald’s paper bags from the USA, Japan and Korea, each sheltering a tree whose foliage reflected its source – the American entries in unmissable red, white and blue, the emphasis in the Asian trees primarily on reds – and occasionally includes a single tiny fallen leaf. Nearby were Corner Forest (2005) and Forest, Inc. (2005), arrangements of toilet-tissue rolls from which Teruya cut and twisted delicate bud-speckled sprigs, their shadow-lattice saving the work from sophisticated craftiness. Instead these humble cylinders contributed to Teruya’s understated universality in a show composed of things we all do: eat, shit and shop.

A more overtly political world-view was also suggested in pieces ranged on the floor, three recent editions of the New York Times, the above-the-fold front-page photos a riot of tiny, upstanding sprouts. The Beslan school tragedy, Hurricane Katrina and Pope Benedict’s triumphant welcome in Germany were the subjects. Visible only if you crouched down, each seedling left a tiny newsprint cut-out, the effect like the reverse shadow of an eclipse, jarring and unsettling.

At the most obvious level Teruya’s clever excisions comment on the relentless sacrifice of trees in order to keep up with papyral demand. But they also refute the allegedly anodyne, homogeneous world that corporations so want us to buy. Peeking into one of these vulnerable dioramas, you feel transported, offered a glimpse of something rare and frangible in, of all places, a mere shopping bag. Teruya rescues these totes from trash-bound obscurity, using the very fact of their ephemerality to create surprisingly tenacious work. What could be simple, easy gimmickry – it’s hard not to be
fascinated by the magic of Teruya’s dexterity – becomes a complicated examination of status (in interviews he admits to being mesmerized by consumer culture) and wastefulness. His skill, coupled with his ambivalence, becomes a visual equivalent of W. H. Auden’s definition of poetry: the clear expression of mixed emotions.