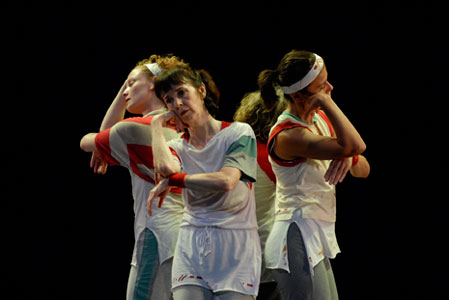 Four women of differing ages and dance biographies sit at a café table wearing headphones and trying to sing along to a recording of Igor Stravinsky’s Le Sacre du Printemps (The Rite of Spring, 1913). Each, in her own way, gets it wrong. This is the charmingly atonal and consciously silly opening to Yvonne Rainer’s much-anticipated dance work, RoS Indexical (2007), a co-production of documenta 12 and PERFORMA 07, which premiered in Kassel and will have its US debut at the New York performance biennial in November.

Eventually, the women – dancers Pat Catterson, Emily Coates, Patricia Hoffbauer and Sally Silvers – get up and start to mark out fragments of Vaslav Nijinsky’s original choreography with stomping feet, angular arm movements, pelvic emphases and crude jumps – a relentless reiteration of Stravinsky’s lyrical, raucous, high-impact composition. Where Nijinsky’s interpretation for Serge Diaghilev’s legendary Ballets Russes culminates in the sacrifice of a virgin, however, Rainer intentionally omits this in favour of comic movements inspired by Sarah Bernhardt, Robin Williams and Groucho Marx. But Rainer’s piece is more than an iconoclastic parody. Deemed lost for many years, Nijinsky’s original choreography was painstakingly reconstructed in the late 1980s, due in great part to the efforts of dance historian Millicent Hodson and to the discovery of dancer Marie Rambert’s score notes in a cupboard after her death. Rainer took the template and soundtrack for her piece from a televised BBC film, Riot at the Rite (2005), which reconstructed Nijinsky’s original choreography in a dramatization that climaxed with the piece’s scandalous premiere in 1913 at the Théâtre des Champs-Élysées, Paris. The music in Rainer’s interpretation is constantly interrupted by excerpts from a recording that restages the original audience’s extremely vocal outrage; into these cutaways, she inserts actions such as the performers throwing imaginary stones at the audience or a group of people storming the stage. While the delivery is sometimes a little awkward, Rainer’s intention is not to create a farce, but rather to revisit a crucial historical moment in which the avant- garde ruptured with the past. The result is a kind of Postmodern superimposition that contains aspects of both homage and critical revision: Rainer wants us to use our mind as a muscle rather than be spellbound by physique or physical feats.

An intense combination of excitement and reverence was palpable in the full- house audience, which was a fitting mix of eager young dancers and the Berlin art world (Rainer having officially quit dance in favour of film in 1975 only resumed her work with dance in 2000). The reception seemed appropriate, given that without the revolutionary work of Rainer and her colleagues in the ’60s and ’70s – in particular at the Judson Church – many of contemporary dance’s conceptual moves would be unthinkable. Their groundbreaking legacy includes the use of untrained dancers, ‘pedestrian movement’, task- based choreography, new forms of staging and exploring non-hierarchical and democratic structures and working relationships.

The same night also saw a performance of Xavier Le Roy’s own Le Sacre du Printemps (2007), which is similarly based on mediated material – in this case footage of Sir Simon Rattle conducting the Berlin Philharmonic. Taken from a special-edition DVD of the documentary film Rhythm Is It! (2004) – which records a social project involving hundreds of young Berliners on a confidence-building dance excursion into high culture – Le Roy’s solo involves a kind of air-guitar spoof of Rattle’s full-bodied conducting style, interpreted as choreography. His was a ‘bad’, if highly complex, imitation that was at once funny and excruciating, as all aped passion is, especially that of a public figure. His audience, with multiple speakers placed strategically under their seats, in turn became a helpless, instrument-less orchestra.