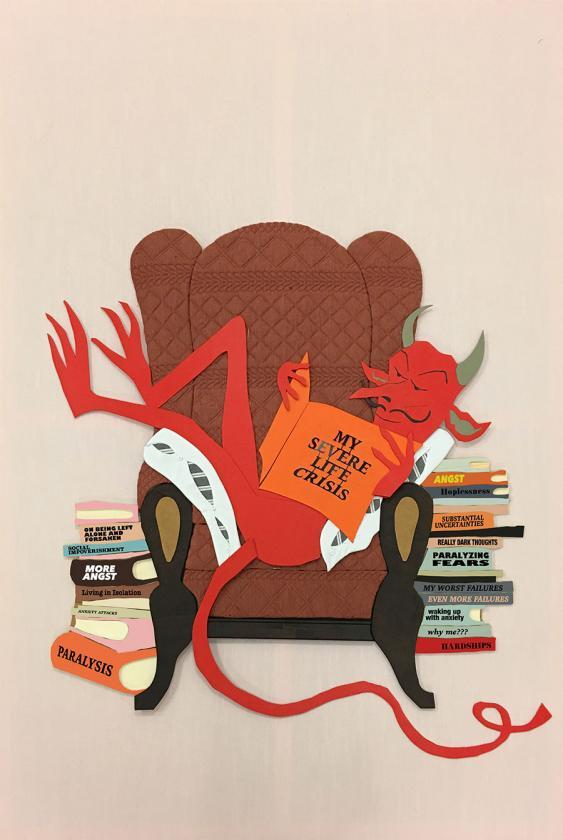 So long as they don’t reside in the White House, maybe monsters aren’t so bad? The ambitious and extremely funny group show ‘Ahhhhh! Real Monsters!’ takes its cue from the 1990s cartoon series of the same name, rehabilitating monsters as a marginalized group. Entering the winding space of Clages, one is immediately struck by the works of studio mates Cosima von Bonin and Claus Richter. Von Bonin’s work Freaks (2018) is a plastic shark with a fabric torpedo between its bared teeth, while Richter contributes a devil in the form of a large-format wall-mounted work in fabric and leather (Rock Bottom, 2018). But this devil is far from terrifying, sat in a wingback armchair reading self-help books on existential crisis. As well as being good for a laugh, Richter’s work also channels the show’s main message: monsters are monsters because they are made that way by others – just ask Frankenstein’s golem. Similarly jarring is Oliver Husain’s video Galleria Cruise (2018), a confusing trip through a rundown mall in which the camera comes to rest on all manner of crazy objects from the bargain bin of civilization, evoking the magical world of the animated series (set in a rubbish bin) from which the work takes its title.