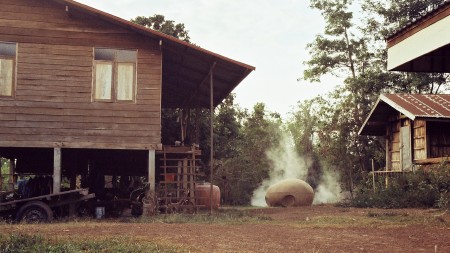 The Oberhausen Short Film Festival, now in its 55th year, continues to provide a platform for an amazingly diverse range of short films. As well as the international competition, which this year featured some 51 films from 31 countries, the festival included profiles of Japanese avant-garde filmmaker Matsumoto Toshio, Mexican ethno-documentary filmmaker Nicolás Echevarría, Russian collective Factory of Found Clothes, and the Sarajevo Documentary School. Added to this was the main themed programme (entitled ‘Unreal Asia’), more than a dozen programmes by artists’ film and video distributors, and a number of other competition strands, including one for music videos. If you craved still more, there was the Video Library, situated within the main hotel servicing the festival, which contained all the films screened at the festival as well as more than 5000 preview copies of films submitted to the festival.

Oberhausen prides itself on its eclecticism, and within the ‘Unreal Asia’ programme alone it was possible to watch films made by interned youths in Indonesia alongside films produced by NGOs, artists’ film and video produced for a gallery context, experimental documentary and historic newsreels produced to show how life was lived in British colonies.

Curated by Bangkok-based curators David Teh and Gridthiya Gaweewong, the ‘Unreal Asia’ screenings sought to survey the uses of documentary and ‘fictive’ modes of production across a range of film and video work from south-east Asia. As the curators conceded, the comprehensiveness of the survey was complicated by the region’s uncertain geography. Nevertheless, in their catalogue essay the curators ask, ‘Does realism have any native counterpart in Asian aesthetics?’ – suggesting that ‘real footage’, caught by amateurs, professionals or politically motivated groups in an Asian context might not ‘imply the same “indexical” relation to reality as it does elsewhere’. Conversely they also asked whether fictive modes might be read for their ‘recording value’. Although the gaps between intentionality, or the cultural conditions of production, and reception were not really addressed in this essay, the festival offered the possibility of reflecting upon these questions.

Three films in particular invited such reflections: Toshio Matsumoto’s Ishi no uta (Song of Stones, 1963); from the Sarajevo Documentary School programme, Vlatko Filipović’s Hop Jan (Heave Ho!, 1967); and, from the ‘Unreal Asia’ programme, Araya Rasdjarmrearnsook’s Daow song duang (The Two Planets Series, 2008). Ishi no uta is an elegantly produced experimental documentary that juxtaposes still photographs by Y. Ernest Satow of a quarry near Aji on the island of Shikoku with an otherworldly score from avant-garde composer and poet Akiyama Kuniharu and voiceover commentary. From a particular western perspective it was possible – even tempting – to think about Ishi no uta in relation to Chris Marker’s La Jetée (1962) or Robert Smithson’s 1970 Spiral Jetty film (which itself owed something to the French auteur).

Filipović’s film depicts workers building a dam in Sarajevo, and, though its purpose was to celebrate labour, Hop Jan was not simply a piece of socialist propaganda sponsored by the Tito government. Sutjeska Film, the state-funded production company from which the Sarajevo Documentary School emerged, made films committed to party lines, but a certain amount of freedom was gifted to its directors, who became known for a very particular brand of (necessarily) depoliticised social criticism.

Araya Rasdjarmrearnsook’s film picks up on and literalises these themes of cultural influence, artistic intent and context. In a number of short vignettes she fixes her camera on a group of Thai farmers who have been sat in front of canonical works of modern European painting. Faced with Manet’s Le déjeuner sur l’herbe (1863) the farmers unsurprisingly comment upon the women’s nudity, objects within the painting, as well as elements of the composition, with both humour and detachment. This, however, would likely be a universal reaction to the work from any group unversed in western art history – would a group of dinner ladies from the north of England react any differently? The curatorial claim, that it might be possible to interpret documentary images as something other than a corollary of western ‘realism’, was ironically most compelling when applied to the films in the programme that were already quite widely circulated – and in one case made – in the West.

New York-based Laurel Nakadate’s manic, voyeuristic performance videos, in which she interacts with men she picks up in provincial American cities, stage social and cultural interchanges that certainly destabilise video’s ‘recording value’. Amir Muhammad’s dry, diaristic, first-person documentaries tell ‘true’ stories with minimal means, whilst remaining conscious and critical of the form’s inscribed truth claims. In Kamunting (2002) Muhammad visits a friend interned within Malaysia’s eponymous prison camp in which detainees are held without trial under the country’s Internal Security Act. The film consists almost entirely of footage taken from the window of Muhammad’s car whilst he drives from his home to the prison. The reason for the trip is explained in unvoiced subtitles, but neither the film’s narrator (the artist himself) nor the final destination is shown – photography in the camp is of course forbidden. In Kamunting the unseen and the unsaid are persistent.

The complexities of relations between the spheres of Asian and non-Asian cultural production in terms of differing fictional and documentary modes of articulations were perhaps most stunningly rendered in the beautiful and haunting short films of Apichatpong Weerasethakul. As well as having two films in the ‘Unreal Asia’ programme, Weerasethakul also won the Grand Prize for his new film: A Letter to Uncle Boonmee (2009). Filmed in various abandoned houses in the small village Nabua in the north-east of Thailand, in Boonmee we hear the voices of three different young men who rehearse and repeat a letter written by Weerasethakul. The letter describes the village of Nabua (the film’s location), where the inhabitants have abandoned their homes. Fact and fiction are expertly confused, exposing the conditions of the film’s production and its peculiar function as a meta-commentary on a forthcoming feature-length project, without losing any of its mysterious power or integrity as a short film. The voiceover muses, ‘there are several houses that I think are suitable for this short film, for which I got funding from England. I don’t know what your house looked like. I cannot use it in my script because it is so different from the ones here. Maybe some parts of these houses resemble yours.’

Dan Kidner is a curator and writer based in London, UK.