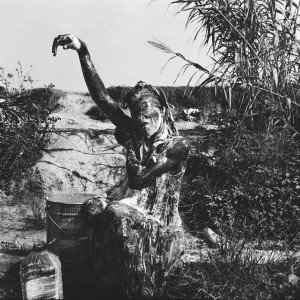 The city, that vast tableau of exaggerated human pageantry and endless architecture, figures centrally as a subject in 20th-century African creativity. It is an unavoidable part of Nigerian author Cyprian Ekwensi’s jitterbug melodrama People of the City (1954) and forms a mesmerizing but cruel mise en scène for so much apartheid-era writing, including the shimmering poetry of Oswald Mbuyiseni Mtshali.
Burrowing into Africa’s canon of urban literature, Simon Njami, artistic director of the seventh African Photography Encounters, held in Bamako, Mali, drew on writing with a more recent vintage to explain his curatorial concept. ‘It’s true that we have no sense of city round here,’ Njami appreciatively quotes from the Guinean novelist Tierno Monénembo’s novel Un Attiéké pour Elgass (An Attiéké for Elgass, 1993). ‘Neighbourhoods spring up like mushrooms, etiolate, then, carried by the wind, let themselves be scattered like spores from a stamen.’ Monénembo’s botanical metaphor is neither wistful nor arbitrary. ‘In Africa the city is doubtless part of an intuitive and fundamentally animistic idea that has governed African thought, be it Christianized or Islamized for centuries’, argues Njami. ‘This animism forbids any fixed definition and obvious fact.’ So the jutting supports in Malian Adama Bamba’s photographs of unfinished buildings have about them the quality of trees, the vertiginous Malagasy street scenes in Pierrot Men’s Modernist photographs resemble fields and so on. ‘Perhaps’, concedes Njami, ‘the metaphor is pushed to the hilt, but what’s important to understand is that in Africa a city is not a city.’
Hyperbole? Well yes, but no more so than one finds in Ryszard Kapuscinski’s writing. In an essay recalling his simple residence from late 1960s’

Lagos, this peripatetic Polish journalist makes a bold claim for the continent’s ubiquitous urban shanties: ‘these neighbourhoods, these monstrous African papier-mâché creations, are made up of everything and nothing, and it is they, and not Manhattan or the Parisian La Défense, that represent the highest achievement of human imagination, ingenuity and fantasy.’

However beguiling, this statement is nonsense. It upholds a dubious ideology, one founded on the sensual mystique of privation. In practical terms this persistent belief continues to undermine the peculiar cosmopolitan character of the African continent. Peculiar because, as elsewhere, the African city is not one thing – it is far more than a collection of papier-mâché hollows. Njami’s impressionistic, at times playful, selection, professionally printed and neatly installed in Bamako’s adobe-coloured National Museum, bore this out at times.
The exhibition started with an abbreviated survey of Samuel Fosso’s work and concluded with a selection of Nontsikelelo Veleko’s well-travelled photographs of urban hipsters in Johannesburg. Functioning as brackets for the exhibition, Fosso and Veleko’s photographs suggest some of the myriad identities defining the African urban matrix – irrespective of whether you believe in their sales pitches as artists.
Fosso’s survey included 16 photographs, dating back to the mid-1970s, when he was an apprentice studio photographer in Bangui, capital of the Central African Republic. Similar to those of Malick Sidibé, Fosso’s early black and white compositions are precisely framed, the poses shyly exuberant, his reliance on props and background detail sparing. If Cindy Sherman is an inevitable reference, it bears adding that, like Sherman’s recent work, Fosso’s newer self-portraiture lacks energy. Gone is the camp effervescence that marked his early images, replaced by the dull pantomime of artistic signification.

Like Veleko, the Zimbabwean Calvin Dondo, winner of the biennial’s overall Seydou Keita Prize, situates his work in the street. His photographs, at least the better examples, have about them a quality evident in all good street photographs: banality. Charge Office Harare (2000) is a superlative example. Framed by a darkening sky, soberly dressed pedestrians thread their way through the city, and each other. Each is looking, somewhere, elsewhere – in some cases nowhere. The work elegantly dramatizes that old chestnut about being alone in a crowd.

Urban commuters also fill Andrew Tshabangu’s Johannesburg photographs, his city not so much colourless as oppressively grey. Even London, haphazardly depicted at its centre and far edges by the Ghanaian expatriate Salifu Oduro-Idriss, looks more inviting. The trope of the congested/evacuated city is most elegantly explored by a handful of North African photographers. Fouad Maazouz’ scene of a Moroccan market, photographed at night, captures a city in which people are ghostly presences. Fellow Moroccan Ali Chraïbi’s scratchy, imprecise views of squat urban canyons are compelling, offering nothing but their own immanence. The same holds for Tunisian Mouna Karray’s architectural studies of half-demolished industrial sites; her elegantly composed pictures are as much meditations on pictorial space as they are on the literal space imaged.

The permeable zone between the city and its opposite – the countryside, the outback – call it what you will – was suggested by two fine contributions. Ethiopian Michael Tsegaye focuses on distant pedestrians, shrouded by a thick, impenetrable mist. Evocative of Hiroshi Sugimoto’s magisterial seascapes, Tsegaye’s funereal and meditative photos hide more than they reveal. Accomplished South African photojournalist Jodi Bieber presents an unflinching essay on Spanish junkies living on the periphery of Valencia (‘Las Canas’, 2003). Bieber’s gift is gesture, particularly in the way she captures the supple beauty of the raised arm.

With its necessarily pliable subject, admitting more than it refuses, Njami’s exhibition nonetheless succeeded in offering an admirable overview of recent attempts to depict an elusive subject: the African city.