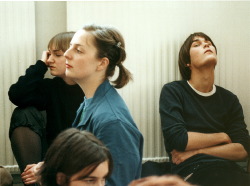 Set against the backdrop of the American civil rights movement, Michelangelo Antonioni's film Zabriskie Point (1970) opens with the young male lead, played by Mark Frechette, attending a rousing political meeting at his university.

When Frechette's character complains about their rhetoric, one of his peers comments that 'if he wants to be a revolutionary he has to learn to work with other people' and accuses him of indulging in 'bourgeoisie [sic] individualism'. Clearly willing to resort to revolutionary strategies, the students loudly discuss how to politicize the entire campus.

Project for a Revolution (2000), a tightly edited video work by Swedish artist Johanna Billing, is the mirror reversal of this scene - as if the camera has gone through Alice's looking-glass into present-day Sweden, and discovered a world permeated with ennui. Billing's characters silently hang around a contemporary university space, seemingly waiting for something to happen. On the periphery of the crowded scene two young men stand against the wall biting their nails and avoiding eye contact, while others, seated on moulded plastic chairs, nonchalantly drink coffee from disposable mugs. The quiet is broken only by the clatter of a photocopier and shots of a young man running up the stairs and into the building. When he sits down among the rest of them, however, his sinks his fist into his cheek and adopts the posture of bored passivity. As Project for a Revolution is looped, the protagonists' unfocused energy seems infinite. Along with the majority of Billing's video works, Project for a Revolution is populated by representatives of her own generation (the artist was born in Sweden in 1973), a demographic often accused, in a country famous for a peculiarly Nordic style of socially responsible capitalism, of individualism and political apathy.

Billing's video Missing Out (2001) also focuses on the behaviour of a group of fashionably dressed young people. Here, however, they lie on their backs in an empty white room and, when seen from above, their slightly moving bodies form something like a decorative pattern on the floor. Billing frames each shot with visible care, often referencing scenes from previous films by directors ranging from Antonioni to the Swedish filmmaker Bo Widerberg in a more recent video You Don't Love me Yet (2003), filmed at Atlantis Studio in Stockholm. Eschewing total control over her work, Billing prefers not to use professional actors and, having established a context, offers little direction as to how her 'cast' should behave. Each subsequent shot in Missing Out exposes the details of the group's reactions to their quiet setting, such as their steady breathing or the smile on one young woman's face as she looks up at the ceiling. On the whole, these people seem attractive, healthy and at ease with themselves, but once again the silence is ruptured by one restless young man who, seemingly unable to relax, gets up and looks out of the large windows that surround the room.

By contrast with what is taking place inside, the view (glimpsed only briefly) is filled with cranes dominating an urban landscape. Breaking up the linear time in which the scene unfolds, their gentle activity is intercut with repetitive sequences in which the young man drives down a suburban street and then stands, as if disorientated, in a shop surrounded by racks of magazines. As is implied by the title of the piece, the protagonist is clearly missing out on something that the rest are able to share. But the question arises: what exactly is he missing out on? Considering that adverts these days sell everything from natural yoghurt to insurance as the key to inner satisfaction, it is possible to imagine a company logo flashing up at the end of the video, followed by a slogan likening consumer choices to lifestyle decisions. In this scenario the young man has perhaps neglected to make the purchase that promises to bring him happiness and a sense of belonging. But according to Billing, the down-to-earth relaxation exercise the group is engaged in was taught in Swedish primary schools of the 1970s. It is therefore a throwback to a prior era, a time in Sweden when people were apparently more actively participating in the construction of a caring state, and is something that children are unlikely to be taught in contemporary Sweden, where the route to self-actualization is more likely to be through investment in commodities.

Billing invited friends and acquaintances - who undoubtedly would have been taught this exercise - to take part in Missing Out, thereby providing the participants with a small period of quiet reflection in which to share a potentially utopian moment from the past. However, the memory has resonance for Billing because on one occasion she was singled out by her teacher as performing particularly well, reducing this relaxation exercise into another bizarre kind of point-scoring exercise.

Reflecting the tension between our desire for recognition as successful individuals and the responsibilities attached to membership of society, more recently Billing made Look Out! (2003) on-site at Gainsborough Studios in east London, the location of a solo show organized by Milch. The now redundant film studios (famous for their association with Alfred Hitchcock) have recently been converted into luxury flats. The work records a situation in which an estate agent shows a group of young adults around level after level of monotonous living units. The contrast between the run-down social housing outside and the sterile luxury within is highlighted when one young woman opens the window blinds and the camera follows her gaze out to the council estate opposite, daubed with 1980s political graffiti demanding, 'Free the Birmingham Six'. Although these potential home-owners exhibit the kind of inquisitive behaviour you would expect from prospective buyers, they look like teenagers. Like the inhabitants of the surrounding estates, they represent a social group that usually wouldn't even make it inside, as this is effectively a gated community designed for young upwardly mobile couples.

Interpreting the role of the artist as something between that of a film director and an event producer, Billing's works find form in a variety of ways - from organizing concerts such as the 'You Don't Love Me Yet' tour, which started at Index in Stockholm in October 2002 and visited rock venues throughout Sweden, as well as the Frieze Art Fair 2003, or the one-off magazine Straight from the Hip (1998), to photographing a group portrait of DJs, as in A Great Day in Stockholm (1998). At each new location on the 'You Don't Love Me Yet' tour she invited local bands to play a cover version of a rock song by Roky Erikson of the same name. In the context of Billing's work repetition is a tool, which in this case allowed each performer or band to express something subtly different and personal by reinterpreting the same song.

In much of her work Billing scrutinizes the things that bind the individual to a collective culture; whether it's the codes that permeate youth culture now, pop music or the political idealism apparently shared by a generation in the 1960s and '70s. And whilst Billing is clearly aware of the political changes that have taken place in the last few decades, many of the events she organises result from a belief in the need to re-create a missing sense of community, quite unlike that engendered by participation in the dominant commodity obsessed culture of today. It is an energetic and optimistic approach shaped by the fact that, outside the art world, Billing and her brother have (since 1997) successfully run a record company in order to promote bands and build audiences for styles of music that are unlikely to make it into the mainstream - appropriately called Make It Happen.