The artist's exhibition at Berlinische Galerie, Berlin, reflects on her position within the establishment as a self-styled collaborator and subversive

Behind the title of Angela Bulloch’s exhibition ‘Information, Manifesto, Rules and Other Leaks...’ is a framing principle: ‘Leaks’ are no longer the backroom business of journalists and informants, but an emerging model of the world. For Bulloch, who defines this exhibition as a continuation of her ‘Rules Series’, begun in 1992, the appeal of leaks is as a system of anti-rules – portals to a pulsing mass of ‘true information’ beyond the posited (sanctioned) information distributed as rules. 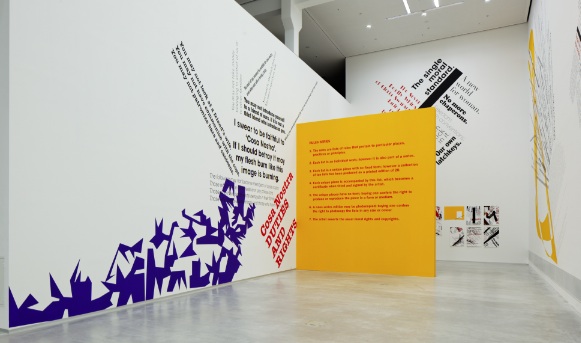 The exhibition is composed of 12 ‘wall paintings’ – texts neatly stencilled onto the gallery’s white walls and combined with graphic elements based on the agitprop pamphlets of the Novembergruppe, the 1920s German avant-garde movement whose members included George Grosz and Otto Dix. At Bulloch’s concurrent show at Städtische Galerie Wolfsburg, visitors’ movements are tracked by wall-mounted drawing machines, like Surrealist surveillance paintings in a house of horrors. In Berlin, Bulloch strips out these signature ‘interactive’ elements – as if technology has disappeared behind its interface to reveal the writing on the wall. The exhibition conceives the leaks phenomenon as a gladiatorial arena constructed by the media out of itself. Bulloch depicts the extraordinary blowout between WikiLeaks and The Guardian by cutting up the ‘rules’ to look like headlines, standfirsts and graphics in Guardian typeface and reassembling them in mural size. It’s a powerful image of traditional media in disarray, while facts and figures are discharged from databases like explosions from a bombshell planted in some future era. 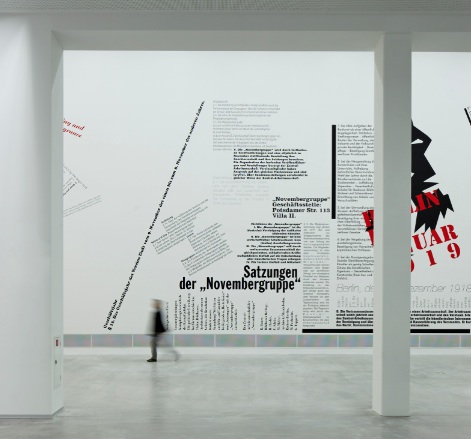 The exhibition opens with a string of injunctions: ‘Please do not run inside the installation’, ‘Please follow instructions issued by the gallery assistants’, ‘Sensible footwear must be worn’. This work, BODYSPACEMOTIONTHINGS (all works 2011), is a votive to the British cult of Health & Safety. The piece, titled after Robert Morris’s show at Tate Modern (first shown in 1971 and restaged in 2009) is composed of the museum’s instructions to visitors. When the exhibition first appeared in 1971 it closed early because over-eager gallery-goers destroyed the art. In 2009, after an inventory of injuries, the art was considered a public danger, and was shut down. The same thing would happen to Ai Weiwei’s installation in the Tate Modern’s Turbine Hall in 2010. 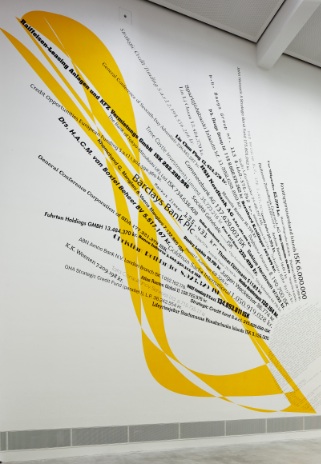 Conceived as a companion to the first wall painting, Bulloch’s Anarchy offers stirring responses: ‘I will not kiss your fucking flag. There is some shit I will not eat.’ ‘Do what you will’. WikiLeaks – Kaupthing Claims reveals Julian Assange’s summary of the payout findings cartooned as an exploding bomb – an update on the Danish cartoons with information turned terrorist. The context is the Icelandic banking drama, in which the UK played the injured party. The BigMac Index, by comparing hamburger prices in the form of a distorted swastika, reveals that Pounds Sterling are overvalued by 28 percent.

The final wall painting is hidden at the rear of the exhibition, obscured by an interior wall screened off like a confessional booth that contains several smaller, more intimate works. On the wall are the typewritten rules of Bulloch’s original ‘Rules Series’ (1992), facing the exhibition entrance sealing the preliminary contract with the viewer-buyer. Behind it is 11 Downing Street, the artist’s contract with power – another swastika – a list of dos and don’ts sent by Alastair Darling to the artist when she was invited to join others represented in the British government’s art collection. The reception was hosted, at the height of the financial crisis, by a ‘major art collector and hedge fund manager’, Bulloch explains in the exhibition notes. Elsewhere, there are poetic moments, like the revelation that something called the International Standard (the system that regulates paper sizes – A4, etc.) is based on √2.

Yet another major prize exhibition for Bulloch (this exhibition is a result of her winning the Vattenfall Contemporary prize) finds the artist compelled to reflect on her position within the establishment as a self-styled collaborator and subversive. True to form, but frustratingly, she is evasive on WikiLeaks, often acting out charges already levelled in the mainstream press. What the world of leaks might actually look like turns out to be a promise Bulloch chooses not to deliver on. Perhaps it's all still to play for. But the possibility is enticing.

Sam Williams is a writer, director and dramaturg, based in London, UK.