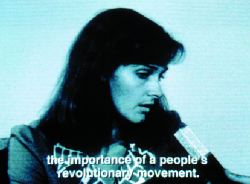 I walked out of Anri Sala's recent show inspired but in the mood to argue. I kept thinking about the three videos I had just seen: two were projected, the third was on a monitor, and each was shown in its own space.Twenty-two fascinating minutes of a video depicted a traditional Albanian bread dish being made, Byrek (2000), and I wished that the recipe, which was written directly onto the middle of the projection screen, had been in English, not Albanian. I was hungry. Actually, I wished the recipe hadn't been included at all. The strength of Sala's works lies in its apparently modest means and his unpretentious relationship to his subject. Even though the handwritten recipe sent to Sala by his grandmother functioned like a stubbornly present fingerprint, its presence on top of the projection came across as a contrived attempt to make art. And one that unnecessarily detracted from the work's almost natural simplicity. Those skilled hands stretching the dough with all the precision that comes from daily routine made me think of the collective idea of 'grandmother' - someone who spends hours cooking, preparing, stirring, cutting, wiping, mixing a whole family together and serving history. Byrek's parallel is with the better television cooking shows - the ones where the cook draws you in, leads you on and holds you mesmerised by his or her ability and, more importantly, by the illusory promise that you too are just as capable. These are the programme that make you want to jump into your TV set in order to get a taste or
a smell of the real thing.

From these generic bread-rolling hands my thoughts switched to another of Sala's films, Intervista (1998), which documents a dialogue between a mother and son; the mother's face is filmed close-up and reveals traces of her youthful, political idealism; her son, the film-maker, full of respect and curiosity, zooms from her wrinkles and short hair to the cracks in the walls of their Albanian apartment. Sala made Intervista after having discovered two fragments of a film that had lost its sound and which features his mother - who was then an activist in the Albanian Youth Communist Union - being interviewed. The work is an intimate document of the artist's search for his mother's lost words, combining the lure of a detective tale with the intimacy of a home video.

This documentary-like method is also present in Nocturnes (1999), the least personal of Sala's three works in this show, and the only one presented on a monitor. Two young Parisian men, apparently with nothing in common, take turns telling the camera their stories. One speaks very seriously about the intricacies of his extensive (live) fish collection while the other, an ex-soldier, recounts his horrific experiences killing people, but only his hand gestures are visible. Slowly the two stories begin to overlap and combine, creating a meta-narrative about the world and its fierce mechanisms, driven only, it seems, by aggression, coercion, futility and misunderstanding. That's when I started to feel a little guilty that my youth had been so easy, unpoliticized and byrek-free. Thankfully though, there was a way out: in all of Sala's videos a moralistic tone may be hinted at, but it is never overindulged. Sala's investigations - whether about a mother whose ideals are no longer topical, a grandmother whose tradition is no longer maintained, or an individual desperate to fit into society - tread a fine line between sociological survey, anthropological exploration, investigative journalism and personal documentary. In other words, he makes the only thing that manages to avoid such categories while still referring to them: art.