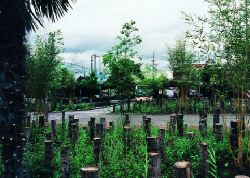 Numerous art projects exploring the idea of the city were staged in Germany's last summer.

With interventionist intent, work was shown in inner city areas; played with living spaces and containers; reclaimed contested places and comical corners; and dabbled in the electronic sphere. These projects could, firstly, be seen as reflections of municipal politics, with culture being employed to lure new enterprises to the city; and, secondly, as an experiment to demonstrate the relevance of art within Germany's bubbling service industry economy.

Hamburg plays a special role in this situation. Since the early 1980s it has encouraged an exemplary, and publicly funded, model of public art, comparable only with Münster's 'Skulptur-Projekte'. This year Hamburg's project, curated by Achim Könneke and Stephan Schmidt-Wulffen was titled 'Aussendienst' (Fieldwork). Many works were placed along the 'Art Mile', an area in the vicinity of the train station, where many different art institutions can be found. For the first phase, Manfred Pernice placed four sculptures along the route, Dosenweg (Can Way, all works 2000), which comprised round, man-sized, mixtures of snack-stands and ad posts. Pernice's allusions to urban materials - tiles, showcases, signs, paths and obstructions - were assimilated into the transitional recesses of the Modern city.

Tita Giese placed her exotic garden, Pflanzeninseln (Plant Islands), with pragmatic and botanical expertise, at the centre of one of the busiest crossroads in the area. This twist - transforming something visible into something privately experienced - worked well. Ronald Jones also built a garden, but one which had an entirely different significance. A small patch of greenery lies close to the Hannover Bahnhof, from whose platforms Jewish inhabitants of Hamburg were transported to concentration camps. Cosmic Garden was built following ground patterns of a garden found in aerial photographs of Auschwitz/Birkenau - some of which were taken by Jones' father, who was in the US Air Force - and became another cause of discussion in the leaden and unresolved debates over Holocaust memorials in Germany.

At first sight, Christoph Schäfer's response to the brief of 'Public Space' seemed not overly inventive in its neat incursion into film. Yet the 18-minute film-loop Revolution Non-Stop was screened in the same cinema where Schäfer had filmed its beginning and end. Some of the cinema's props were left among the audience. The film explores - after lingering in the cinema, which Schäfer described as the 'dream house of the collective' - pedestrian zones and shopping arcades; a recreation of the 'fashion of slowness' of 1839; a limousine ridiculously over-coded with insignias of style; and bargain hunters. Revolution Non-Stop offers, with its onslaught of concrete experiences, invention and borrowed snatches of discourse, a full-on revolution rush. At the same time, alongside the theorising protagonists of the film, the images shuffle through situations that you have only just passed on the street. The relationships between art and public spaces tie themselves into knots before they might be unravelled all too quickly, in all too plausible explanations.