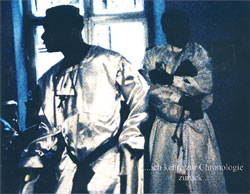 Paul Gilroy’s The Black Atlantic: Modernity and Double Consciousness was first published in 1992. The book’s ambitious attempt to conceive of culture without the bonds of territoriality and what he termed racial ‘unanimism’ soon made it one of the most influential texts in post-colonial studies (and also in the field of popular music). No German translation has appeared to date, perhaps partly because Germany’s colonial history has long been overshadowed by the legacy of the Nazi era and is only now beginning to be addressed. The ‘Black Atlantic’ exhibition, curated by Shaheen Merali, could be understood as an attempt to examine and extend Gilroy’s original concept, but taking into account the Austro-German perspective.
The film Passagen (Passages, 1996), by the Viennese artist Lisl Ponger, is a good example. For Gilroy the ‘Middle Passage’ – the journey made by slave-trading ships across the Atlantic from the west coast of Africa – is a constitutive moment in Afro-Atlantic history. (Gilroy quotes Peter Linebaugh: ‘The ship remained perhaps the most important conduit of Pan-African communication before the appearance of the long-playing record.’) Ponger takes as her subject another formative migration. A montage of footage taken from private films of holiday travel and cruises that she has collected over the years, the film soundtrack features a voice reading texts that refer to a very different journey: the flight of many Central European Jews from the Nazis to Asia. Many took refuge in Shanghai and found themselves in a region that would later be visited by travellers with quite a different interest in the exotic. The difference between enforced flight and leisure travel, between a free-floating gaze and a narrative of secrecy, links Ponger’s passages with Gilroy’s slave ships.
‘Black Atlantic’ (the project also included lectures, a series of films and an online forum) restricted itself to four artists, each of whom was represented by several works. Besides Ponger, they included her partner, Tim Sharp, whose video Traveller’s Tales (2003) is based on a feature film entitled Tuareg (1970), but uses only footage shot just before the actual takes. Alongside Ponger and Sharp, Keith Piper and Isaac Julien represented a more orthodox understanding of the ‘Black Atlantic’. The two largest rooms were devoted to two video triptych installations by Julien, of which Paradise Omeros (2001), with its intricate juxtaposition of Caribbean utopia and British dystopia, had already been shown at Documenta 11. In True North (2004) Julien extends his exploration of the imaginative charge of black and queer identity into the polar region. The large-format images of empty landscapes and of a black woman in a white dress wandering along a beach of black lava and ice deliberately play with the motif of the odd one out who nevertheless somehow fits in: Julien is here ‘feminizing’ a reference to Matthew Henson, who went with the American explorer Robert Peary to the North Pole and was, according to Bradley Robinson in his biography Dark Companion (1948), ‘the first of all great Negro explorers’. In True North the ‘colours’ of race are schematized and detached from the subject, as if double consciousness had been transcended by nature’s sheer, sublime presence. Maybe it’s because of this that the piece lacks the kind of complexity of inner montage between the video screens that Julien achieved in Paradise Omeros or Baltimore (2004), his more recent amalgamation of Blaxploitation, Afro-futurism and museology.
In the exhibition True North was staged as the destination of a field trip, in the last room, creating an interesting contrast with Keith Piper’s mixed-media contributions spread out over the ground floor. The Sounding Gallery (2004), set up in the foyer, consisted of walk-in replicas of ‘ideal’ German living-rooms, with various recorded eye-witness reports of life under National Socialism coming out of loudspeakers that looked like microphones. What unites the owners of these voices is that they are all black, members of a race sometimes considered by the anti-Semites as not even worthy of their scrutiny of biological definition. Only after the war did (West) Germany become an ‘Atlantic’ country. But that’s another story.