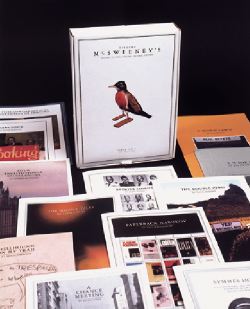 One night last summer, I was sitting in my friend's living room listening to her rehash in gory detail the goings on at a party she'd attended the night before. My friend, a New York journalista, was still juiced by the event, and was regurgitating who and what she'd seen. Every writer and journalist in New York had been at this 2000 person event. 'I don't get it. They were doing this Yalie upper class improv troupe thing, and everyone was just clapping.' What was the event for, I asked. 'McSweeney's' - the name rolled off her tongue. 'McSweeney's?' I'd never heard of it. 'Yeah. Imagine the New Yorker crossed with Pavement', she said.

By now, a lot of people know that McSweeney's is the love-child of Dave Eggers, its editor and author of the much discussed A Heartbreaking Work of Staggering Genius: Based on a True Story (2000). But when I finally ran across McSweeney's a couple of weeks later, I was a bit surprised. It was hardly the slick, four colour fantasia I'd dreamed up, the kind that publishes fashion spreads with pull quotes of comments by the Dalai Lama. It wasn't glossy or large-format. No half-nude siren beckoned me inside, promising a mythical tale of early hardship, eventual success, and, finally, the comforts of moneyed, Tantric living. As far as I could tell, it was designed with just one font. I was looking at a thick-waisted hobgoblin of a journal: slightly homely and definitely a little awkward. It looked like it might be a fanzine dedicated to 60s English television shows like Dr Who.

The cover's one typeface was a stuffy serif font that was part academic, part prep school recalcitrant, part eccentric anglophile, and it was all over the place in different sizes. Probably every graphic gizmo Bill Gates had jammed into Microsoft Word - pie charts, bar graphs, borders, italics, em dashes, smart quotes, etc. - was somehow featured on the front or back. Flipping through, I found no pictures, but a piece of anti-slick-design agitprop was jammed into the lower left-hand corner: 'If words are to be used as design elements, then let designers write them.'

Nowadays, that's a message not many periodicals can claim. In fact, the sentiment was present from the very first issue, published in late 1998 and dubbed Gegenschein, which translates as 'against beauty'. Now sold out, and something of a collector's item, it featured articles, stories, quips, and pieces posing as letters. Essays such as 'Yet Another Example of the Porousness of Certain Borders' by David Foster Wallace, were thrown together with 'The Zapruder Film: the Novelization', and 'The Future Will Bring Changes' by Eggers himself. There was even some art criticism in the guise of 'The Twilight of Modernism and the Dawn of the Neo-Senilists', by Komar and Melamid, the Russian artists who once polled people in 17 countries to decide what to include in their 'Most Wanted' and 'Most Unwanted' artworks project.

In fact, Gegenschein goes a long way towards summing up McSweeney's editorial philosophy: if by beauty we're talking about the kind of Appollonian elegance, continuity of style and voice, and consistent intellectual position that makes magazines such as the New Yorker and the New York Review of Books, and newspapers such as the New York Times, come to stand for something greater than just a magazine or a newspaper. Certainly, one might say that the sharp division between the New Yorker's more serious prose and the 'low' world of surly humour, exuberance, pranks, and general cleverness in its cartoons, is a basic element of its editorial philosophy.

With McSweeney's, the severe taxonomy of genres and the division between high and low is not only fiddled with, it's entirely upset. From an editorial point of view, it is a Boschian landscape where the clean lines delineating fiction, non-fiction, reportage, opinion, and humour are thrown out in lieu of a topsy-turvy world where reportage is crossbred with humour, and fiction blends with letters to the editor, in a grab-bag of oddities, a supermarket of prose. McSweeney's implicit model is less the book than the radio, or perhaps a library where everything is out of place, where literature sits beside self-help and history is sandwiched between humour and sports.

What this boils down to, at some level, is that McSweeney's rejects the idea of the journal or the magazine as public institution, which parses, codes and comments on reality, or gathers a tribe of believers, whether they are Christians or upper-middle class secular cosmopolitans. It is less interested in commenting on the world than in a wide-eyed acceptance of all that is quirky, strange or absurd in it. Call it eclectic post-Modernism.

The second issue included such exotic editorial specimens as 'Hopper's Boathouse', a choose-your-own-adventure narrative you can follow to different pages in the magazine. It also included a 16,000 word account of Marfa, the famous Texan town where Donald Judd settled and built a small sanctuary for his art. But if any article is emblematic of the spirit of this issue, it has to be 'No Justice,

No Foul', which treats famous supreme court cases as basketball games between the liberal and conservative judges on the court: 'Pivotal play in Hirabayashi v. United States [the case in which redress was sought by Japanese Americans for the suspension of their rights during World War II] occurred with 1:23 left in the game, when Harlan Stone dribbled to his left toward the top of the key and then threw a behind-the-back bounce pass to Felix Frankfurter, who had faked outside and then cut back into the lane. Reed was busy trying to deny Rutledge the ball and so he didn't react in time to stop the pass.'

It's true that McSweeney's strident irreverence is sometimes too knowing and its cleverness just too self-satisfied. It's pranksterish disregard for some of the values of journalism as a public institution is what my journalist friend objected to - the 'Yalie improv thing'. Personally, I could do without the miniscule fonts and the long-winded front matter. On the other hand, much of this is genuinely funny and manages to say something pertinent. Isn't it true that the Supreme Court is regularly seen as two teams vying for the upper hand? Does it toss in a dose of reality to portray the justices as human beings with agendas, egos, and personal rivalries, not to mention crafty moves?

It is far from certain where the heteroglossia of McSweeney's will lead, or whether it will be able to sustain it. As a magazine evolves, it's difficult to prevent what started as a playful experiment from hardening into a position that must either be defended or abandoned. The call for a 'position' will become increasingly strident. But for now, it's hard to refuse the pleasure of reading it offers. It's like playing hooky from school.