An interview with Raimundas Malašauskas about the TV show programmed by the Contemporary Art Centre, Vilnius 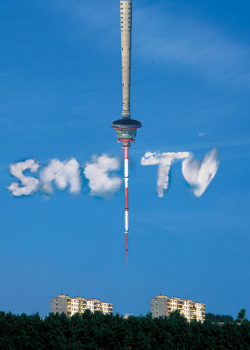 ‘Could there be an unwatchable tele-vision program? What would it look like?’ Rene Gabri’s question, posed at the end of Salò (for Television), the episode of the Contemporary Art Centre Vilnius’ TV show he presen-ted in February 2006, might well sum up the project’s gambit – though it all depends on what is meant by ‘unwatchable’. Curated by Raimundas Malašauskas, and now in its third season, the inaugural episode of this experimental program aired on 20 October 2004, one year after the invitation arrived from Lithuania’s TV1 to fill a 25-minute weekly slot. This merger of commercial television and contemporary art has been variously described as ‘Beavis and Butt-Head doing Dogme in Vilnius’ (an audience response after the first broadcast), an ‘intervention into normality’ (the gallerist Vita Zaman-Cookson) and a ‘meta-show meant to deconstruct reality and its programming’ (Rai-mundas Malašauskas). Its tagline: ‘An amorphous group of social misfits and cultural outcasts are handed the reigns of a fledgling television program. Not having any experience in making television, they decide to reinvent the medium.’1 The product of a shifting collective, past episodes have included appearances by artists Gabriel Lester, Julieta Aranda, Egle Rakauskaite, Gediminas and Nomeda Urbonas, and Deimantas Narkevic?ius, critics Dieter Lesage and Alfonsas Andriuškevic?ius, TV director Daiva Bilinskiene?, dancer Algirdas Stravinskas and a talkative cabbie in Harlem.

Aaron Schuster In the first episode of CAC TV, Audrone? Žukauskaite?, a Lithuanian philosopher, remarked: ‘Aristotle said that a human being is an animal that has an extra ability to live a public political life. Now he’d have to update his words: A human being is an animal that watches television. When you switch the TV on, the psychoanalysis is over.’ This last line reminds me of Theodor Adorno’s comment that watching television is like a ‘psycho-analysis in reverse’, enforcing repressions, conformity, thoughtlessness and so on. How does CAC TV react to the critique of television as the ultimate mass pacifier?

Raimundas Malašauskas I am sure if Sigmund Freud had lived in the second half of the 20th century he would have had his own TV show. (Although he was invited to work for Hollywood – they wanted him to collaborate on screenwriting – but he never accepted the invitation.) The ratings for his show would have been higher than for those presented by Adorno or Aristotle! I think Freudian psychoanalysis has become part of the fabric of television. Everybody is a psychoanalyst these days and, as we stated in our first manifesto, ‘everybody is a TV producer’. TV is not a pacifier of the masses. In his 2005 book Everything Bad is Good for You, sociologist Steven Johnson explains how TV introduces higher complexities of story-telling and connects disparate subjects in a more challenging way than the film industry or pulp fiction. So in that sense it trains the viewer’s cognitive faculties: someone who stopped watching TV in the early 1970s would probably find contemporary TV series too obscure and complicated to follow. CAC TV draws on these threads; it creates more controversy than peace.

It does not necessarily provide a message about how to fight normality and the standardization of culture, but it functions as a rupture in normality itself. This is not just due to the format and production of CAC TV, but to the whole network of relationships that surround it, which includes mainstream media players like TV1.

AS Let’s talk about TV1. CAC TV is broadcast on a commercial station. Does it attract advertisers? What are its ratings?

RM It is profitable enough not to have been replaced by another show. Our average viewing figures are around 6,500 people per episode. On occasion, we have attracted up to 21,000 viewers, which is similar to the number of visitors we would expect to attend a major CAC exhibition, although audience figures have been as low as 4,000 at times. TV1 place their advertisements in the break between the two halves of the show; we have never been approached directly by local advertisers.

AS?In a way, CAC TV has a Seinfeld feel to it: it’s a show about nothing. Conversations about pants, eggs, dandelion-picking, the making of TV shows, life in and around the art world, UFOs…

RM You mean CAC TV is existentialist TV with a para-normal flair? Or do you mean it raises the question of whether it makes sense to raise questions? The first seasons of Curb Your Enthusiasm, by Seinfeld co-creator Larry David, were a definite source of excitement for us. It was a show that deconstructed nothing and Nothing at the same time.

AS Yes, I am also a great fan of Curb Your Enthusiasm. What I meant was that CAC TV picks up on and radicalizes two currents already present in mainstream television, and long-time staples of contemporary art: banality and self-reflexivity.

RM I think TV is much more banal and, at the same time, much more self-reflexive than art these days. It almost pushes those two currents to a sublime level. Have you ever cried watching TV?

AS No, my relationship to TV is more Warholian: it empties me out.

RM Like tears do! That’s why more people experience Stendhal syndrome (when you are overwhelmed or faint in front of an artwork) watching TV than at museums.

AS Apart from Larry David, what else has inspired you? It seems that, after the video art of the last three decades, which positioned itself largely against television, there is a new interest in reinventing TV or creating artworks around it (I am thinking of Omer Krieger’s ongoing Berlin-based project TV Channel, among others).

RM I get a kick from reruns of TV Party when I’m in New York (Glenn O’Brien’s show from the 1970s), Radio Show in Lithuania (those guys were doing the most interesting and outrageous media jamming I’ve ever seen), Oyvind Fahlstrom, Betty Boop, Gerry Schum (the Dusseldorf art-TV pioneer), Jean-Luc Godard, Andy Warhol, Tepeyac (a TV/video workshop for Mexican immigrants in New York), early MTV videos, multiple technological experiments to develop platforms for content to be produced and shared online…

I hope linguists will not mind me appropriating their terminology to say that TV has become a global language and that, in this era of user-generated content, it is quite logical that various sub-dialects are being invented at the same time as its technical possibilities are being developed. We never wanted to show artworks on CAC TV; our idea was to produce a TV program using art as its operating system. We saw art as a complex organism that afforded the means and methods of rearticulating all other possible subjects (including banality and self-reflexivity) in a different way on TV.

AS In David Cronenberg’s 1983 movie Videodrome, Dr. Brian O’Blivion contends: ‘TV is reality and reality is less than TV.’ Discuss!

RM I prefer Brian the talking dog from the TV cartoon series, Family Guy. He says: ‘Reality is what we do together.’

AS What are a few of your favourite moments from the history of CAC TV?

RM I like it when unexpected, spontaneous actions surface from scripted situations: the artist Gediminas Urbonas driving blindfold in a van to the UFO research centre in Hessdalen, Norway, for instance, or rappers from Vilnius translating a Jonas Mekas exhibition into beats and lyrics.

AS And those teenage Italian girls going on about their jeans in the Salò episode is a funny and fitting complement to Pasolini’s tirade against ‘liberated’ sexuality in his late essay ‘Repudiation of the Trilogy of Life’ (1975).

RM Yes, and don’t forget artist Kestutis Šapoka reading one of his own speeches backwards for the camera. He talks about schizophrenia and the act of the negation of communication as a kind of communication in itself. As we like to say: ‘Don’t watch it at home!’

Raimundas Malašauskas is an independent curator and the producer of the first two seasons of CAC TV (2004–6). He lives in Venice, Italy. A book, published in both English and Lithuanian, and a DVD of CAC TV high-lights will be released in April.