A new use for old power tools 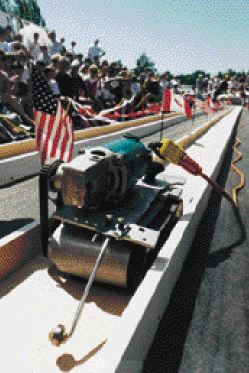 'Pretty much every family has an old belt sander gathering dust in their garage', says Lorne Neilson, founder of the Belt Sander Drag Racing Association in Port Robert, Washington State, 'this is a chance to get it out, decorate it up, make it unique.' Neilson's Lumber Yard is pretty much the spiritual ground zero of belt sander racing, a sport which has exploded in popularity partly as a reaction to the increasingly curdled and unpalatable $100 million dollar salary deals in American major league sport, and partly because it has some of the fascination of Robot Wars without the need for PhD level nerdishness.

'I'm not saying other people didn't try it before we did, its such a basic thing after all', admits Neilson, 'but we got people organised, made sure all the races take place on similar tracks, with similar sanders'. The idea kicked off ten years ago when Neilson was in a bar with some other local contractors and 'well, we just started talking about how [the sanders] can get away from you.' Belt sander racing started this way and so far has stayed this way - a community, family, beer coolers, and picnic tables sort of sport. There are more than 100 sander race meetings around the US each season, organised mostly by local lumber yards and hardware stores, and attended by as many as 500 spectators at each venue.

The sanders race in pairs, side by side, down a regulation width plywood track 30 feet long. It's also important to have to have enough run-off space at the end to slow down the sanders, which are still accelerating when they go through the finish line. The machines share a power supply that automatically cuts off as they cross the line but, as Neilson observes, 'some of the modified ones still call for a little padding to catch them'. Obviously it's an advantage to have a sander that runs straight and doesn't bang into the side rails too much. Back in the early years all the sanders were stock models but Neilson's colleague Ken Keaton changed the sport irrevocably by transplanting a higher RPM grinder motor into his sander - a move which won him the tournament but earned him the sobriquet of 'Cheatin' Keaton'. Now there are two divisions: an entry-level class for stock sanders straight and a custom section for the modifieds - sanders whose motor has been swapped for one from a grinder or router. The belts should be standard, off-the-shelf, 'extra coarse', but there is scope for gluing on extra grit - although it's officially frowned on by the Association, which is trying to crack down on grit-enhancement in a low-key, 'nobody wants a witch hunt here', kind of way.

Four of the more obsessive racers are a group of politicians from Alberta, Canada, who make the 16-hour drive to Port Robert each year for the national championships. Last year they came in hooded tracksuits and aviator glasses to race a modified rig known as the 'Unasander'. Previously, they turned up as the Star Trek top brass when they raced the 'USS Sanderprise', and prior to that as a crew of Wagnerian Vikings. Belt Sander racing is part of a much older American historical tradition of tradesmen repurposing their tools for recreation and sport, an attraction which arriviste activities like Florida's swamp buggy racing circuit just don't have. You don't have to look much further than tree felling or carriage racing competitions to discover sander racing's impressive ancestry, and more than half the prizes awarded in the sport are presented for the decoration, lacquering, and customisation of the sanders themselves, regardless of performance. Ownership of a competitive belt sander may be a year round quest for perfection, but weirdly enough, the way it's packaged - with the whole race over in a couple of seconds - makes it the perfect sport for immediate Internet broadcast. The two-second clips of streaming video on the BDRA's site don't hog your bandwidth, and the user-generated content, with fans uploading their own footage, is what it's all about these days in Internet sport. The Association has recently been fielding a few calls from overseas, thanks to some publicity in the New York Times, from people who are thinking of setting up their own national circuits. There's no reason why, given a large enough indoor space, it couldn't become a metropolitan, loft-dweller type of thing, with Scandinavian designs racing on birch ply tracks.

The current record for the 30 foot course is 1.52 seconds - but just how fast is that in real terms? 'We've had a few people try to calculate that, and we tried a couple of those police radar guns on them, but they just don't show up', says Neilson - 'something to do with the grinder motors, we think'.