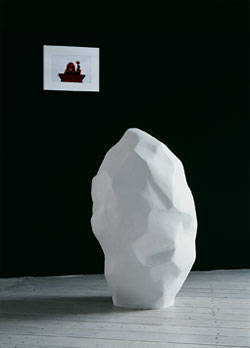 Painted onto the racing green walls of Chris Evans’ exhibition ‘The Rock and the Judge’, the words ‘Militant Bourgeois’ resembled the car brand names worn above the back bumpers of family vehicles and seemed ready to take their place in a parking-lot roll-call somewhere between the Renault Mégane and the Ford Mondeo. But while there’s often an absurd dissonance between automobile monikers and the objects they describe (has anyone ever felt sunny about a Nissan Sunny, or cavalier about a Vauxhall Cavalier?), Evans’ wall text was, in its complex way, very much of a piece with the works in his show. ‘Militant Bourgeois’ suggests both a taking apart and a belligerent upholding of middle-class values. The images and objects in ‘The Rock and the Judge‚’ however, occupied neither of these poles. Rather, they lay in an in-between space, somewhere between ‘straight’ society and a fantasy of the avant-garde.
The art historian Michael Baxandall once wrote that a work of art is ‘the deposit of a social relationship’. It’s hard to think of more immediate contemporary proof of this than Evans’ screenprint Hermes Candles Painting for the Hermes Fraternity, Rotterdam (2004). Here six young men stand in a panelled room, their suits well tailored, their longish hair slick and lordly. They’re members of Rotterdam University’s élite Hermes Fraternity, whose alumni make up a sizeable number of the Netherlands’ business leaders, and even of its cabinet. In the middle of the group sits a painting by Evans of two silhouetted, recently extinguished candles, their smoke pluming upwards to form a triumphal arch. Commissioned by the fraternity, the painting could be thought of as the material trace of a re-enactment of the Renaissance patron–artist relationship, a set-up that Modernism was supposed to, but never quite did, dispel. What’s interesting here isn’t Evans’ rolling back of the artist’s supposed emancipation, but the context in which it’s done, and the fact he does it with a (mostly) straight face. The Netherlands, of course, is a beacon of the political left, which makes the patrician mien of Hermes’ frat boys all the more alarming. Looking at the piece, it’s as though, held together with cuff links and seigniorial self-confidence, they’re about to pass through the arch in Evans’ painting and into the nation’s future, and the artist is doing nothing to stop them. Indeed, it’s possible to collar him as their accomplice, but that would be to indulge in a grad-school blindness to the limits of art’s ability to shape the world. After all, do these guys really need the help of an artist (of all people!) to get that seat on the board?
Elsewhere in the show Evans ran into other representatives of the powers that be. In The Rock and the Judge (2004) he juxtaposed a drawing of a bewigged magistrate by ex-police officer Richard Hill with one of his own sculptures, a rugged approximation of a boulder. Wielding his gavel, the magistrate appeared to pass judgement (aesthetic, and perhaps political) on the sculpture, an act of critical pre-emption that leaves the viewer oddly speechless. This sense of intractable determinism, of deals already done, lived on in Magnetic Promenade (2004), an airbrush painting on paper that depicted four tripod-like sculptures in a fantasy sculpture park. Loosely based on existing public sculptures, they looked like the product of an obscurely gathered and long-ago disbanded focus group made up of faceless technocrats or sci-fi literalists – at any rate, of nobody with much of a feel for what art in the public sphere might mean, or do.
For all this, though, Evans’ practice is far from being a set of capitulations to the powerful. Rather, it asks the art audience (with its vague leftist swagger) whether there’s anything to be gained from getting busy with those sections of society the avant-garde traditionally dismissed. Cop Talk (2005) is a poster for a recent Evans-organized police recruitment drive at the Rietveld Art Academy. Given the small proportion of art students who go on to pursue a successful career as artists, and the pleasing thought of being policed by people who have passed through the liberal art school system, this would seem to be a sensible idea, or at least one that’s no less sensible than any other about how an artist might thread through the social fabric. That it will never work is the key to the brilliance of Evans’ project. It asks us to rethink what heckling from the sidelines means, and to hear the hollow ringing that sometimes accompanies our rebel yells.