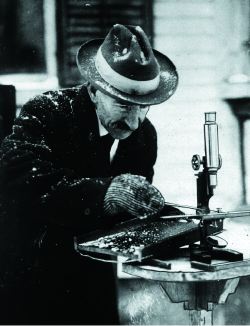 'Hast thou entered into the treasures of the snow?'

Wilson Alwyn Bentley was possessed by a passion for snow. Each winter he would wait for it to arrive, catch a few flakes, and dash back into his woodshed. He did this for 47 years.

Bentley was born, lived and died in a farmhouse six miles from Jericho in Vermont. Of all the aspects of farm work he was, apparently, particularly adept at digging up potatoes. Aside from this noble, earthy skill, the farmer-scientist was also the first person ever to photograph snow crystals. His first successful attempt was made in 1884 when he was 19 years old. Having achieved this, he evidently believed he was meant to keep doing it until he dropped dead. Over the course of his life, using the same inexpensive microscope and camera equipment, he took 5381 photomicrographs of snowflakes.

Bentley's interest in snow began when he 'became possessed with a great desire to show people something of this wonderful loveliness, an ambition to become, in some measure, its preserver'. 1 His initial task was to record and make permanent that which is transient and volatile. The questions came later. Cataloguing is a way of trying to understand; to be able to show where one thing fits in relation to another is to give the illusion of knowledge. It shows the way it is - not why it is.

Bentley was a compulsive recorder: at about the same time he took his first photomicrograph of a snow crystal, he began to catalogue the weather in a notebook - three times a day. He developed a method for this that he never, ever, deviated from. It involved three little squares with symbols for the sun, rain, and different types of clouds, and that trademark of the obsessive: notes in tiny handwriting. One line per day, one page per month. This too he did for 47 years. He catalogued different types of snow crystals; he measured and recorded the size of raindrops, for which he devised a method that is still in use; and he described the 649 auroras he looked for, each night, over the course of his adult life.

Bentley's prolonged observation of snow led him to make certain deductions concerning its creation, form, and variety. He was, in effect, the first cloud physicist, years ahead of his time, and his understanding and explanations of the formation of snow were groundbreaking. Many of his theories were later proved to be true; others turned out to be erroneous. He was, however, never really taken seriously by the scientific community, although there were a few along the way who encouraged and drew attention to him. Surviving letters from these people always describe Bentley in terms of their admiration for his 'patience and diligence', although somehow this always seems like a euphemism for 'useful but bonkers'. Part of the problem was that Bentley allowed his emotions and enthusiasm to show when writing for scientific journals: 'There is no surer road to fairyland than that which leads to the observation of snow forms. [...] even a blizzard becomes a source of keenest enjoyment and satisfaction, as it brings to him, from the dark surging ocean of clouds, forms that thrill his eager soul with pleasure.' 2

Such outpourings do not go down well in the putatively dispassionate arena of scientific debate. Bentley's misfortune was that most of his theories were born in isolation. As a consequence, some of them suffered from a lack of perspective that might have been provided by collaborative conjecture with other scientists. By the time 1910 came around he had done his creative work. After 15 years with his limited equipment and knowledge, he had run out of sensible things to be deduced and observed. Unfortunately this didn't stop him, and he continued to pursue answers to questions using extravagant and eccentric lines of reasoning, usually involving electromagnetism. 'Snowflake' Bentley continued to spend his winters in the woodshed for another 21 years.

Prone to rhapsodise about watery phenomena, in one interview he said: 'I can't remember the time I didn't love the snow more than anything in the world - except my mother'. 3 Such a statement flags a state of mind which is usually referred to as single-minded or obsessive depending on one's degree of politesse. 'Business, pleasure, grief, cold [...] all are forgotten in the search for these marvellous gems from on high.' 4 This is an awful lot to forsake, and such an intense devotion to anything other than God is generally regarded as suspicious - if not evidence of an underlying emotional disturbance. Bentley's Holy Grail was 'the one or few pre-eminently beautiful snow crystals that we may be certain exists among the snows...'; an ethereal, Platonic ideal in a contrast to his very earthbound lifestyle. 5 (He religiously chewed each mouthful of food 36 times.)

Regardless of the object of their infatuation, obsessive people are almost always interesting to begin with and then tedious after a while. Anyone with a depth of knowledge of any particular subject can be easily goaded into revealing a fascinating fact or two, but when they eagerly mistake a superficial inquisitiveness as the sign of a kindred spirit they become relentless. By all accounts Bentley was such a man, quiet and reserved until the subject of snow was broached. An analogy would be when you show polite interest in someone's holiday and they take it for a keen desire to see their photos. Unfortunately, Bentley had thousands of them, not including his pictures of those other 'water wonders', dew and frost, or his photographs of smiles.

This was the strangest, and most intriguing, of all his fixations. He described himself as a keen student of faces and 'it was nothing unusual for him to digress to a discussion of the relative pulchritude of the curve of the lips of Mary Miles Mintern and Mary Pickford [...] and he never missed an opportunity to attend a cinema in which either of these women appeared'. 6 (Every year he would wrap some maple sugar up in a package and send it to Pickford.) He made lists of pictures from magazines that he wished to make copies of: 'Esther Ralston profile'; 'perfect mouth, Laura La Plante'. 7 Bentley spent a lot of time with the young girls of the neighbourhood, took them to the cinema, bought them ice-cream, and photographed them. On his travels, which he always did in the summer for fear of missing a snowfall, he would write about the very pretty mouths of the inhabitants of the towns he visited. These mouths, of course, always belonged to young females. As with everything else he was interested in (he also collected pebbles), Bentley catalogued the smiles, which later became an excuse to talk to their owners. He would approach young women and ask if they knew why they smiled so prettily, to which, of course, they would say they did not.

In spite of his other interests, Bentley inevitably became known as 'The Snowflake Man'. So many of his photos had been published in such a variety of magazines, from American Embroiderer to Nature in Britain, that his renown was widespread.

In 1920, the newly formed American Meteorological Society elected Bentley a fellow and then awarded him its first research grant - a sort of lifetime's achievement award for '40 years of extremely patient work'. 8 They gave him $25.

Bentley's quest began and ended as an aesthetic one. His motivation originated from a desire to capture these 'miracles of beauty', in which 'every crystal was a masterpiece of design'. 9 When he died in 1931, after 5381 photos, Bentley was still able to say he had seen 'no two snowflakes alike'. 10 His images no longer serve any useful scientific purpose - nowadays, if a snow crystal needs to be preserved, it is suspended in liquid plastic which hardens on contact - but he left behind questions about snow which remain unanswered. In 1988, a scientist called Nancy Knight discovered two identical snow crystals, exactly where Bentley predicted they might be found: high among the clouds.