Focusing on the relationship between power, historical narratives and the individual, the biennale brought together 52 artists from 16 countries

On the balmy afternoon of 30 January, the Colombo Art Biennale (CAB) opened to a packed hall at the Lakshman Kadigamar Institute in central Colombo, the capital city of Sri Lanka. In its third edition, the biennale took forward an ongoing engagement with contemporary reality through ‘Making History’; it was a logical step from previous iterations ‘Becoming’(2012), and ‘Imagining Peace’(2009).

Spread across seven venues, it brought together 52 artists from 16 countries. Founder and Director Annoushka Hempel helmed a vibrant curatorial team comprising Neil Butler, Amit Jain, Ruhanie Perera and Chandraguptha Thenuwara. The biennale focused on the relationship between power, historical narratives and the individual.

Tucked away on the a rear wall of the main venue, the JDA Perera Gallery, hung digital prints of stories derived from oral narrations, letters and tree-of-life maps that record the trauma experienced by ten different women during the 30-year-long Sri Lankan civil war. Curated by Radhika Hettiarachchi, ‘Herstories Project’ archives the memories of mothers, offering a unique perspective on local communities. The texts and visuals not only record personal histories but bridge the gap between archive and artwork, while highlighting the vital role of feminine memory within a nation’s official history.

War and loss are not, of course, unique to Sri Lanka. The Irish artist Anthony Haughey’s works Disputed Territory (2006), Class of ’73 (2006) and the H Block Archive (2014), include photographs, videos and texts in an attempt to recover lost histories – be it those of refugees who poured out of Yugoslavia into Macedonia in 1999; or Albanian children killed by ‘ethnic cleansing’ projects in Kosovo; or the Irish resistance of 1990s. Painstakingly tracking, recording and conserving photographs and footage of those wiped from the face of history, Haughey reinvigorates contemporary art’s responsibility towards preserving alternative and endangered narratives. It’s a task that Qatar’s Khalifa Al-Obaidly performed gracefully with Tagged (2009): nine stark photographic portraits of anonymous migrant workers in Doha. ISBN codes painted on otherwise contented faces are unavoidable reminders of the objectification of individuals whom the world turns a blind eye to, and of the curatorial concern for ‘futures (that) cannot be imagined without the people who inhabit it’ – as the curators’ statement clearly stated. Resonantly, the ‘subject’ smoothly disappears via the mechanism of international capital in Nepal’s Sunil Sigdel’s Spine (2014). Hundreds of gloves sourced from migrant workers are strung together like beads on a string, or vertebrae, in a chilling visual metaphor for their unsung contribution towards many a developed nation.

By contrast, the individual subject’s glorified role in history-making is dismantled by Sri Lankan Layla Gonaduwa’s Silverfish (2014), in which she reconfigures a particular chapter of an ancient, epic Sinhala poem. Arriving at clashing narratives by inter-changing the letters of the words in the chapter, she plays around brilliantly with the idea of ‘Making History’ in a very literal sense. The absurdity of the piece colludes with the Scottish artists Jo Hodges’ and Robbie Coleman’s interactive one-off performance Witness: Remember: Forget (2014) that hurried viewers through a mock-official scenario of looking at and noting down personal impressions of stock images culled from the internet, photographs of the streets of Colombo and even the artists’ own childhood. Kafkaesque in its absurdity – the viewers were guided under tight ‘official’ guidance/scrutiny – the piece interrogates the proiritization of individual, subjective memory over the collective’s. Its only official documentation was the viewer/participant’s notes, that were subsequently given away to street vendors! Veteran Sri Lankan artist Jagath Weerasinghe’s cabinet of personal belongings – clothes, books (including James Joyce’s Dubliners from 1914, and Sinhala titles) and wax blocks bearing shaving paraphernalia in what looked like cryogenic freezes, was a minutely detailed documentation of subjective history. Aptly called Bad Archaeology (2014), Weerasinghe, who is also a renowned archaeologist, concedes to ‘the impossibility of archaeology to be a science as such but an ideological practice’ and problematizes the idea of objective history. The ‘Homelands’ show at the Lionel Wendt gallery, which included work from the British Council collection, highlighted similar concerns, especially through Susan Hiller’s The Last Silent Movie (2007) that brought together sound recordings of 25 extinct or endangered languages.

The renovated warehouse, Park Street Mews, hosted Indian artist T.V. Santhosh’s Effigies of Turbulent Yesterdays (2011–13). Obvious in its questioning of ideologies that support state-sponsored monuments and the discourse of masculine power, the work unfurls through a fibreglass sculpture – a decapitated hero spurts blood from the neck astride a strapping horse. LED timers spread across the horse blink random timings and lend the piece an eerie air of inevitable doom. Similar concerns inspired Sri Lankan Pala Pothupitiya’s History Maker (2014): a massive, classical male figure sculpted from metal sheets with a knife-encrusted face that embodies colonial history in South Asia. Colonial history and its ongoing, disabling legacy in the region was explored further by Bangladeshi artist Mahbubur Rahman’s sculptural installation Replacement (2014), which comprises life-sized representations of bridesmaids in postures of unnerving subservience to two central figures – royal uniforms in military regalia on stilts. The figures were fashioned from army boot leather and elegant gowns tailored from army fatigues with exquisitely embroidered symbols of British royalty; the crowned effigies were those of King George V and his Queen on their visit to the Delhi Durbar in 1911. All of this was a reflection of the collusion of a dependent and therefore feminized (as opposed to a masculine and independent), domesticated military and the state in his homeland as well as Europe and America’s continuing cultural hegemony in South Asia, which has replaced direct colonial rule.

Italian Pietro Rufo’s Not in My Backyard (2008) – via laser cut pages of treaties between USA and the States of South America (between 1947 and 2002), which came together to form a shimmering American flag – highlights how power controls the interpretation of texts. A strong but silent resistance charges Pradeep Chandrasiri’s installation Things I Told, Things Not Heard and Things I Tell Now (2014) that explores the inevitability of compromise in political dialogue. A scar tarnishes the close-up of a scrubby head in a massive photographic print that acts as a backdrop to two ornate chairs facing across a table – all half-buried in a pile of burnt charcoal.

At the Post Graduate Institute of Archaeology, Gihan Karunaratne’s CAD drawings (Kettling, 2012) stood out in their imaginative audacity. Mapping out the best strategy for corralling protestors around St. Paul’s Cathedral, Trafalgar Square and Bank of England area, the works were based on extensive discussions with senior police officials in London. It’s a fantastic, if uncomfortable eye-opener on how the function of an artist can be deployed to act against society. By contrast, Janananda Laksiri’s multilayered Tight Rope Walk (2012) – a video loop of the artist trying to walk across a mesh of electric wires midair – was a fecund take on la condition humaine.

Sri Lankan and international artists, art writers, curators and scholars talked up a storm at CAB 14’s ‘Conversations’ programme while renowned performance artists took over the streets and galleries of Colombo. Eugene Draw improvised on a violin in response to Tristan Al-Haddad’s site specific Womb/Tomb (2014), and Eva Priyanka Wegener and Thomas Pritchard pranced around artworks to embody their spirit. Adrian Schvarzstein and his troupe attacked the streets with locally made brooms, while on a more political note, veteran Sri Lankan performance artists Bandu Manamperi, Jake Oorloff and Kumari Kumaragamage explored power, violence and gender from unfamiliar perspectives.

As the Biennale drew to an end, LED lights flickered faintly in Koralegedara Pushpakumara’s Illuminated Barbwire (2014) inside lengths of transparent tubing – subtly questioning his nation’s efforts to gloss over the wounds of civil war. Danushka Marasinghe’s four-minute long HD video loop (Concealing Marks, 2012) ran close-ups of booted feet walking across sand and the rhythmic, painstaking process with which every footprint is wiped out by a locally-made broom. Meditative yet piercing in its critique of official narratives, the work encapsulates the CAB 14’s resistant ethos. Although it’s one of the youngest biennales right now, and obviously strapped for resources, CAB has the potential to grow into a unique and authentic voice that explores and contextualizes the South Asian experience within an international art context.

Kurchi Dasgupta is an Indian artist and writer based in Kathmandu, Nepal. 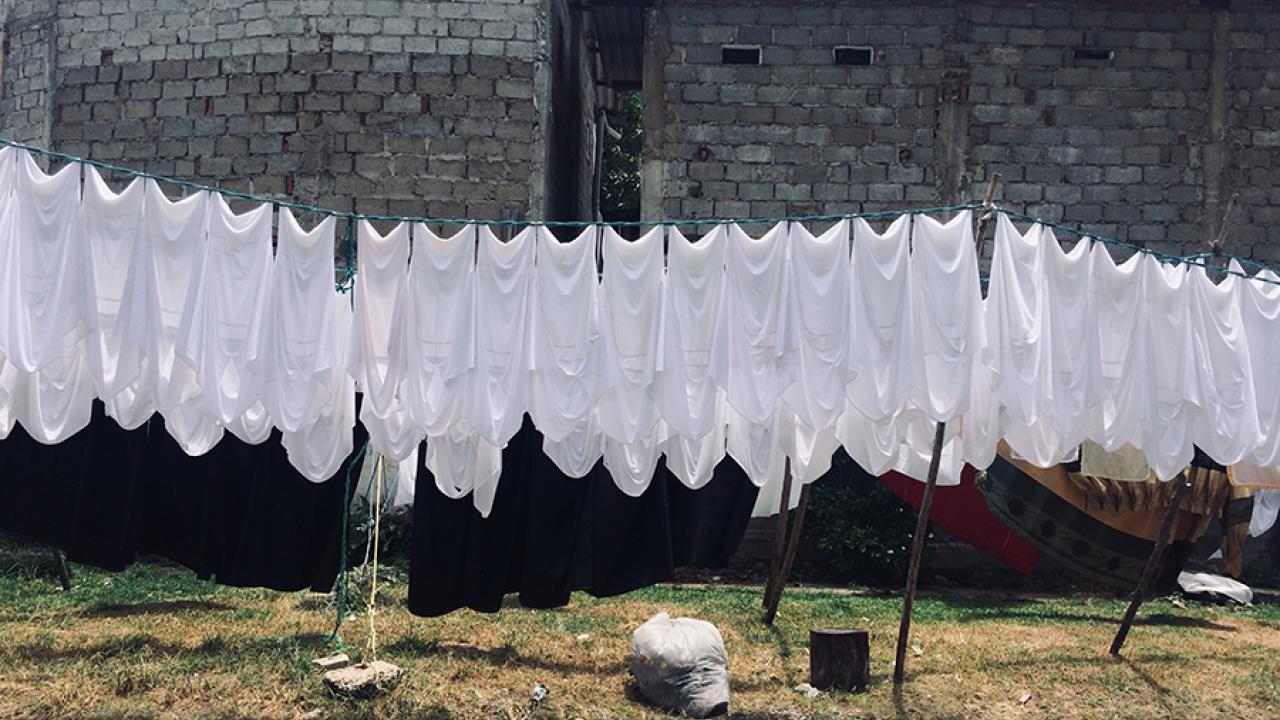 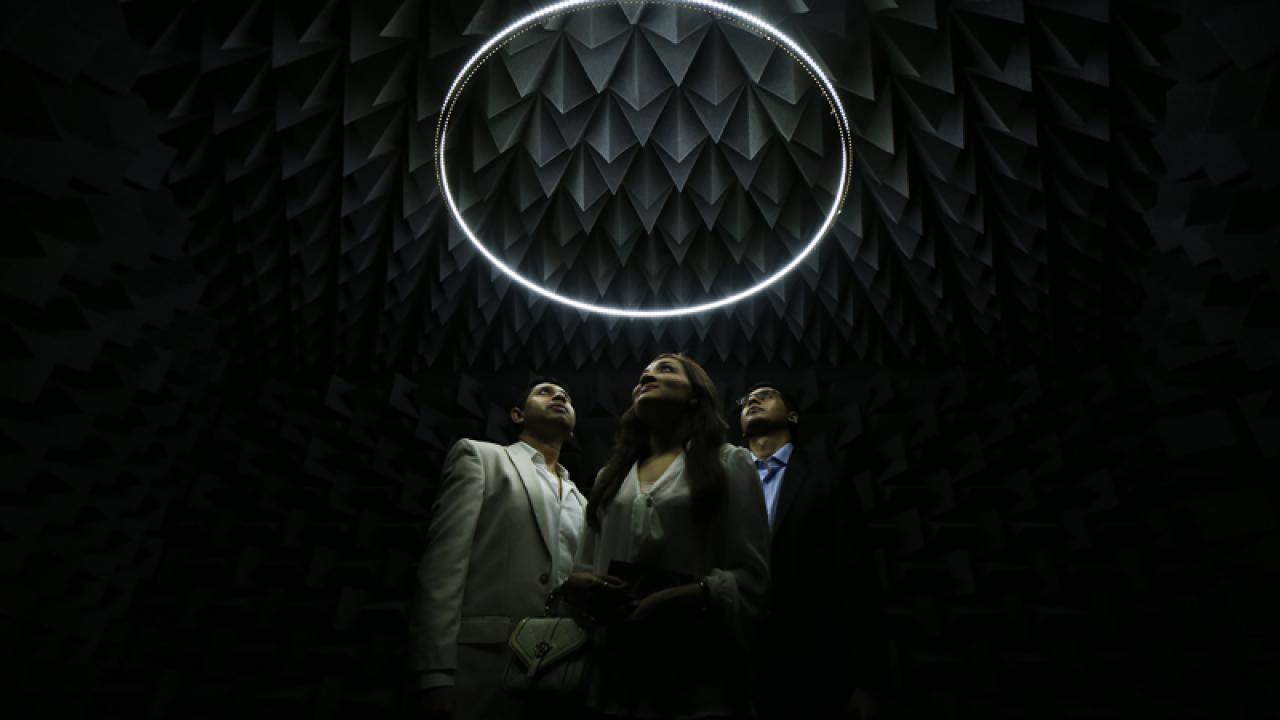