Carol Bove mines the recent past: the sexual revolution, key books and the most immediate of historical deposits – style 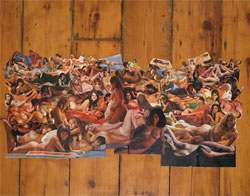 Museums may house history, but we first glimpse the past in the familiar spaces of domestic life. The moment we’re able to make our own scrambling, burrowing way about our childhood homes, we begin to encounter our parents’ possessions –
objects that, with their muted colours, their exotic mouth-feel, we know do not belong to us. A little later, once we’ve developed an awareness of the visual tics of world in which we live, we realize that some of these objects are not only not ours but are not even of our time. These things that have pre-existed us, though, these souvenirs from our mother’s and father’s yesterdays, seem nevertheless to be bound up with who and what we are. They’re both props from a rehearsal of the life we know and something infinitely stranger – portals to a half-abandoned past.
The oeuvre of Carol Bove – born in 1971 and raised in Berkeley, California – is steeped in such pre-school archaeology, particularly a number of works that, on first viewing, resemble the product of a child’s rummage through, upending of, and attempt to restore order to, their hippie parents’ bookshelves. Take her Adventures in Poetry (2002), in which three asymmetrically hung, wood-veneer shelves support 25 paperbacks, two hardbacks and a few magazines, all of which were first published in, or overwhelmingly evoke, the elastic, semi-mythic period we know as the Sixties --– which is to say some time between the poet Philip Larkin’s big-bang year for ‘sexual intercourse’, 1963, and the early 1970s.
While Bove’s books are temporal cousins, they bear other family resemblances, too, although these are sometimes difficult to identify. The degraded genealogy traced by the cheek-by-jowl positioning of The Communist Manifesto (1848) and Mao Tse-tung’s Little Red Book (1964) is obvious enough, but what, say, has either title in common with ‘Black Pope’ Anton Szandor LaVey’s The Satanic Bible (1969) or Gregoire Müller’s The New Avant-Garde: Issues for the Art of the Seventies (1972), with its photos and texts on Minimal and Conceptual art? One organizing principle is suggested by the title of Abbie Hoffman’s featured Revolution for the Hell of it (1968) and developed by the book’s cover, a Richard Avedon shot of the author leaping in the air, legs spread, gun in hand, grinning handsomely from ear to ear. This is an image of revolutionary chic with the emphasis firmly on chic, and one that gets us thinking about retro-fetishism and the way in which it transforms the spectrum of 1960s political and lifestyle protest offered up by the component texts of Adventures in Poetry into a costume party, a set of after-the-fact, highly aestheticized and substantially undifferentiated experiences of rebellion. I suspect Bove’s point, though, is not to damn this type of fantasy but instead to present it as a frame through which we might peer at the past. Framing something means limiting it, but it also means setting up relationships between its parts. Frames rarely overpower the things they surround and even more rarely imprison them for long (only worthless images fail to escape to a new life in your imagination). Style, the most immediate of all historical deposits, may be thought of as a frame, and for Bove style is ‘potent, unavoidable, and utterly substantive’.1 It is not a spanner in the works of ideas, but what makes them function. It is also a time machine.
While it is, in a sense, obvious, the fact that Bove employs books as something close to objects bears pointing out. The viewer is not encouraged to pluck them from her shelves. Instead, they sit there in all their corporeality (Bove is nothing if not a body artist), sometimes propped open at an opaquely telling page, but more often communicating only through their scale, cover design and titles. In her Touching (2002) Bove abandons shelves altogether, placing 178 paperbacks on the gallery floor – some vertically, some horizontally -– to form a low barrier. The piece recalls the ground-hugging Minimalism of Carl Andre, although there’s little that’s minimal about the storm of competing words on the volumes’ spines. Perhaps what links Touching and, say, a work such as Andre’s Lever (1966) isn’t so much a comparable density of information as the notion of tactility. Bove’s work takes it title from, and incorporates a copy of, Ashley Montague’s Touching: The Human Significance of the Skin (1971), a text that explores the connection between the dermis and the mind (what Montague dubs ‘the mind of the skin’). Reading books, especially the