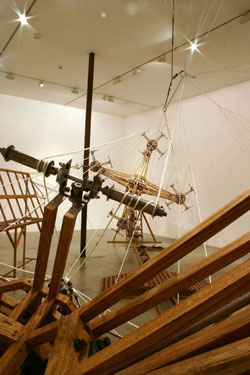 There is, claimed the title of Conrad Shawcross’ show at Victoria Miro Gallery, ‘No Such Thing As One’. No indivisible particle, then, no Leibnizian monad or Abrahamic God, and not even the number ‘0.999…’, which in mathematics is, surprisingly, exactly equal to the number one. In an interview published in the exhibition catalogue, the artist explained that ‘it is difficult to find examples of one or singularity in nature and I am excited by the possibility that it is purely a human idea’. Well, me too, up to a point. The problem is that this sort of epistemological doubt is a well-worn position, and expressing it through art does not necessarily develop its terms. If such art is to succeed beyond the illustrative, it must bring something new to the table and must bite on the now. Looking at Shawcross’ show – which resembled a number of technical engravings from Denis Diderot’s Encyclopédie (1751) brought to three-dimensional life – it was at times hard to conclude that the artist had achieved more than handsome transcriptions of a familiar sceptical stance.

In the downstairs gallery stood the large sculpture Paradigm (Ode to the Difference Engine) (2006), a work whose title refers to Charles Babbage’s 1822 design, not successfully realized in his lifetime, for a calculating machine that many historians now identify as the first computer (a functioning model now exists in London’s Science Museum). The work comprised two wooden, windmill-like mechanisms, stood face to face and connected with white cord. As the left-hand windmill span one way, the right-hand windmill span the other, twisting the cords into a length of rope that was instantly unravelled. Conceived of as a failure, this machine, like Babbage’s, had no output, no product. Perhaps it was awaiting some sea change in human understanding, what Thomas Kuhn famously described in his The Structure of Scientific Revolutions (1962) as a ‘paradigm shift’. Kuhn’s book, an important influence on the thought of Michel Foucault, argues that scientific ‘truth’ is historically and culturally contingent, and is thus relative. By evoking the thinker in the title of his work, Shawcross raises the spectre of epistemological uncertainty, but in a way that recalls a diligent footnote, a nod towards a chapter in the history of ideas, rather than something really felt and acted upon. For all that we might enjoy Paradigm’s Jurassic technology (the artist’s work is adroit in the way it addresses the British love of absurd, hand-built gadgetry), in the end it merely tells us something we already knew, and then stops dead. Art isn’t allowed to complicate things. Art, here, is a clear pane through which received ideas pass.

Similar limitations dogged Binary Star (2006), shown in the upper gallery. The piece consisted of two long, spinning wooden arms, at the end of which revolved several smaller arms, to which yellow lights were attached. As the mechanism turned (accompanied by pleasing pre-industrial creaks and judders), the lights described elliptical shapes that converged in a variety of spectral Venn diagrams and threw dramatic shadows across the gallery walls. Inspired by the fact, first noted by William Herschel in 1802, that some stars are locked in orbit around each other, the sculpture sought to question our relationship with our own, singular sun, to which we might ascribe the notion of the irreducible atom, monotheism, monarchy and any number of other iterations of the concept of ‘one’. Binary Star (2006) is, in essence, an illustration of Karl Popper’s refutation of scientific proof (not all swans are white; not all solar systems are mono-helic) and perhaps a plea for a politics and spirituality based on the plural, not the singular. Popper and pluralism are fine things, sure, but they are not newfound things. Simply to serve them up cold in sculptural form does not feel like enough.

It’s easy to account for the popularity of Shawcross’ work: like a TV academic, he presents important, just-complex-enough ideas in an accessible and attractive package. In the process, however, it somehow loses sight of itself as art. His sculptures struggle to argue for their own materials and scale (something all sculptures should be capable of), and appear unconcerned with how their ontology, their very art-ness, might inflect the information they transmit. Perhaps what this ultimately betokens is a degree of disdain for art – that scruffy, difficult discipline that’s never quite been accepted into the academy. Let’s hope not. A little more art is precisely what Shawcross’ studious, scrupulously indexed sculptures need.