In 2014, I moved to a stately townhouse in Baltimore of the sort I could never afford back in New York. Like many mid-sized American cities, Baltimore is a great place to be an artist, but galleries seem to come and go, perennially relocating and rarely cultivating a stable of local talent. It is a dissonant feeling to be surrounded by so many people making strong work without a steady locus to celebrate (or purchase) it.

This summer, however, I heard that one of my favourite painters, Fabienne Lasserre, was to be included in ‘Light Over Plaster Clouds’, a group exhibition at the enigmatically named Critical Path Method gallery (CPM), which opened in November 2020. The director, artist Vlad Smolkin – who grew up in Baltimore after his family relocated from Kiev – worked for years at Peter Blum Gallery in New York before launching CPM in a Chinatown apartment in 2018 to explore new modes of collaboration. As the pandemic surged, Smolkin left New York and took over a renovated Baltimore townhouse, nestling an office onto the second floor and building an apartment for guest artists to stay in while making and installing work.

Lasserre makes luminous acrylic paintings on polymer stretched into uncannily biomorphic arrays. I found a few suspended from wires or projecting from the floor alongside the vivid, latter-day constructivist c-prints of Indian American photographer Yamini Nayar, and vintage watercolours by the feminist co-founder of A.I.R. Gallery, Rosemary Mayer. It was an unlikely convergence of media and temporality, but one that felt more intuitively coherent – and intensely sensuous – than many curated shows I’ve seen in recent years. Although CPM is nominally a commercial enterprise, Smolkin seamlessly incorporates pieces from his personal collection into exhibitions and visitors can wander the building freely with no apparent partition between gallery and domestic space. I found Lasserre’s Listener II (2020) suspended below a skylight as I ascended to the upper floors, its subtle gradients appeared as though they might have been there forever, dappled with light.

The gallery’s name references both Buckminster Fuller’s account of human civilization, Critical Path (1981), and a cold-war term for analytic processes. Smolkin tells me he sees CPM as a zone of collaboration and a hub for people from Baltimore and the region. While out-of-towners are welcome – the current group show, ‘Sweet Home’, features mostly artists from Japan and a suite of photographs by New Yorker Irina Rozovsky will be exhibited this winter – many of CPM’s artists are connected to Baltimore in one way or another. Lasserre teaches at the nearby Maryland Institute College of Art, and the inaugural show highlighted new drawings and photograms by Clifford Owens, who grew up in the city playing street-corner rounds of Skully. The game’s gestural movements and improvised bottle-cap pucks appeared as a series of materially dense works on paper, juxtaposed with a wad of gold-foiled dollar bills. Such local confluences do not mark CPM as a gallery exclusively for Baltimore artists but act as a reminder of the subtle ways in which the city is enmeshed in a much larger firmament.

Following a year of lockdowns, amid an epoch of virtuality, it is appealing not only to be reminded of the haptic pleasures of art IRL but also to be drawn in by the antiquated humanistic filaments that connect us. Such immanence seemed to be the logic of the recent group show ‘Muscle Definition’, a sustained meditation on human power and frailty, the corporeal in its myriad forms. Some motifs were overtly queer: Mike Linskie’s camp quilt, A Man for All Positions (2015), or a scarred nude flexing defiantly in the late Genesis P-Orridge’s lo-fi Polaroid Our Aim Is Wakefulness (See a Cliff /Jump Off /Our Enemy Is Dreamless Sleep (2018). Near the front of the space, a Tibetan Medical Thangka painting mapped figures in visceral detail while a small, figurative clay sculpture (Heartbroken, 2021) by Melissa Hopson sat doubled over, resting delicately on the parlour window sash.

Smolkin told me of his desire to think about galleries in a more decentralized way and to be situated in networks both large and small – an approach that brings to mind the expression ‘intimate immensity’, coined by the philosopher Gaston Bachelard in The Poetics of Space (1958). CPM seems to be wrestling with big themes, using a broad palette. Yet, being there generates a rich psychic tension that feels unsettling and private. While Baltimore is periodically written up in the same vein as Austin or Portland (keep it weird), locals know that the city is, caricature aside, deeply urbane but suffused by spectral energies. CPM is the first space that seems to crystalize that energy: for as long as it operates, viewers will never quite know what to expect. In Smolkin’s words: ‘I think creativity and name-ability are opposing forces: the people I admire most are shape-shifters.’ 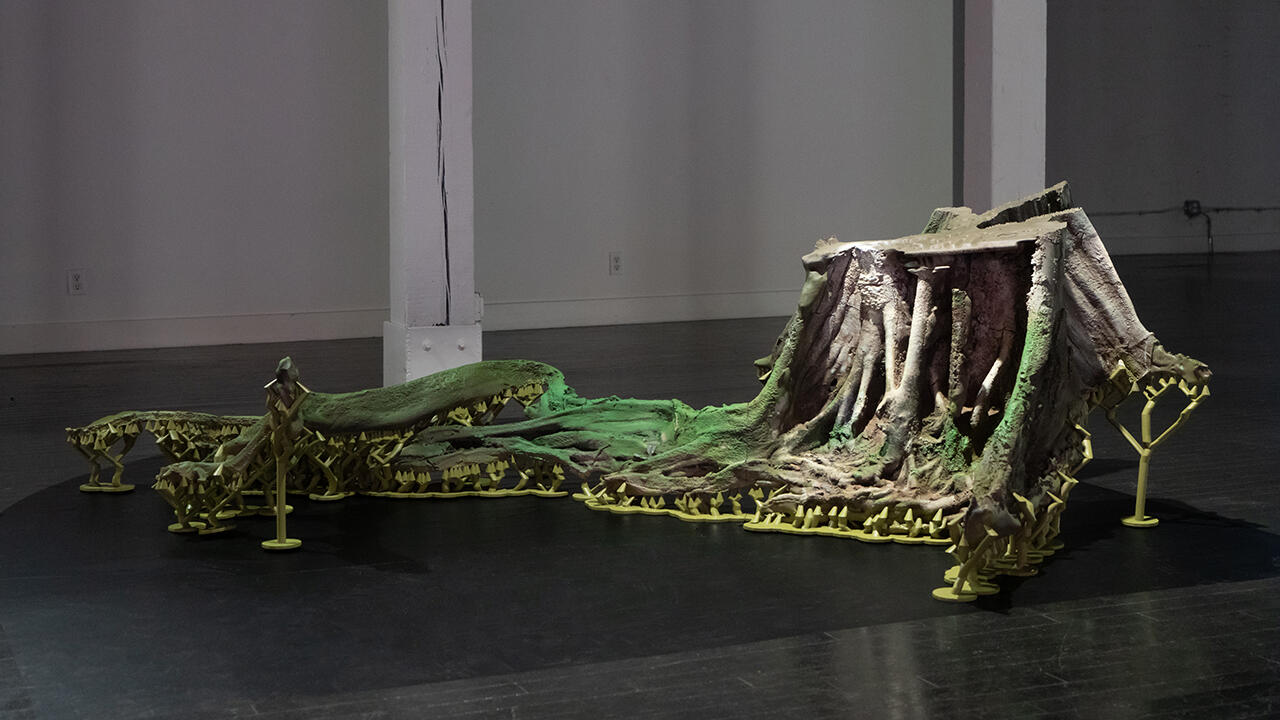