Ahead of artgèneve, a guide to the best shows to see around town

'Spectrolia Corporation', Guillaume Dénervaud's exhibition at Hard Hat, is organized around two large drawings: all-over tracery made of round, serpentine abstractions, interconnected shapes, produced thanks to a patiently developed technique. If the images by the Geneva-based artist evoke the fascinating textures of digital renderings, the works are in fact painstakingly handmade, using masking tape, scissors and graphite powder, enhanced with spray paint. Shiny magnet metal balls seem to crawl over the surface of the magmatic pictures, that are bathed in an industrial orange light, creating a crepuscular, sci-fi atmosphere. Suspended from the ceiling of the space, a spiraling sculptural element reinforces the dizzying effect of the display. In the vitrine of the gallery, Dénervaud has placed a found object, a plastic box used to measure air pollution which he has transformed into a lighting device, discreetly indicating the apocalyptic tone of the show, oscillating between illumination and extinction.

For those familiar with Laure Marville's work – rigorous, geometrical abstract motifs painted on wooden panels, complex combinations of shapes emerging from her interest in pop music, interior décor and Swiss folklore - 'Lauriers', presented at Société des Arts might come as a surprise. Here the Geneva and Lausanne-based artists mixes linocut and wool knitting to form dense, colourful, text-based compositions. Atlases of references as well as surfaces on which the artist seems to have inscribed reading notes and intimate souvenirs, the pieces constitute an unfolded journal that associates names of friends, planets and plants. In fact, it seems that 'Lauriers' uses its particular fabric-based materiality and the gesture of knitting as a statement on craftsmanship, taste and folk art, as well as a manifesto discreetly claiming domesticity, friendship and organic collaboration.

Adrian Piper's ‘The Mythic Being’ at Mamco, organized by curator Elise Lammer, is a three-room display of works and archival elements collected in collaboration with the Adrian Piper Research Archive Foundation in Berlin. Concentrating on works and documentation that derive from the artist's series of street performances between 1973 and 1975 – dressed as a man, wearing a moustache, a pair of reflective sunglasses and a curly wig – the show luminously reveals the poetic and political dimension of Piper's gender-questioning interventions. Drawings on black and white photos, taken from Piper's journal, each reproduce a different 'mantra' the artist's character memorized and repeated for a month. The provocative brutality, as well as the emotional intensity of the speeches, beautifully contrast with the theoretical background of the work - as revealed in a documentary film, placed at the end of the exhibition, by Peter Kennedy (Other than Art's Sake, 1973) showing one of Piper's performances. 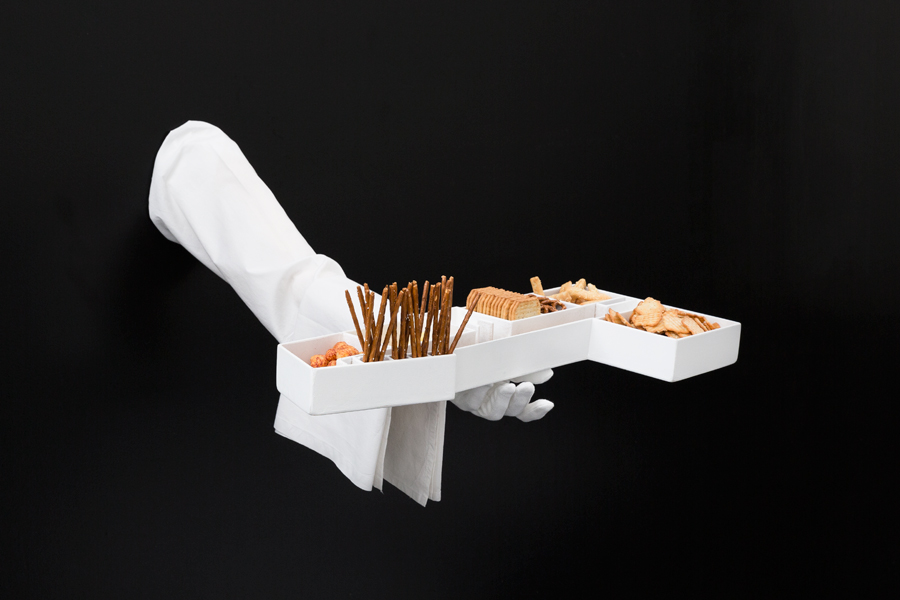 Curated by Balthazar Lovay, Director of Fri-Art, the Kunsthalle in Fribourg, 'Proxy Paradise' presents a series of specially-produced works by recent graduates from the Geneva School of Art and Design, for the New Heads BNP Paribas Art Awards. Usually conceived as a proposal somewhere between a graduation show and a prize for young Swiss-based artists, this year's exhibition seems to have accessed another dimension. Collectively conceived as a curatorial statement that opposes the very idea of competition, ‘Proxy Paradise’ relies on inventive strategies or 'proxies' that allow the artists to avoid the cults of authorship (by delegation, infiltration, collaboration or even disappearance) or of seduction (parody, confrontation, critique, conversations) that are usually associated with art awards. The result by the 14 participants selected by Lovay form, in the end, a drily consistent arrangement of artworks that reveal the ethical aspirations of an emerging generation of artists.

In 2010, Mandla Reuter bought a parcel of land in Los Angeles that acts as the remote matrix of a series of works that inhabits the back room of his solo show at Mezzanin gallery: a dark blue, monochrome map using a diazo chemical process, a technique that was used by architects to copy plans, is displayed in relationship with a group of photographs that, placed upside down, documents the surroundings of the terrain. The South-African born, Berlin-based Reuter connects this ghost-site with an ensemble of other pieces that freely associate indexes of a personal geography, as well as a meditation on global networks: a ready-made optical fibre cable hung on the wall evokes a futurist tree branch (Electricity, 2018), small Thasos marble rocks, that travelled in a container from Greece to Los Angeles, and a optical fibre cable remain silently on the floor (Clouds, 2018). In the vitrine, the cast of a cacao nut (Fruit, 2018) silently reminds us of the fact that Switzerland may not itself be removed from the marketplace of  global postcolonial trade.

'Drag Drag Solo', Cally Spooner's coming show at Centre d'Art Contemporain Genève relies on an investigation on time, that fuses past, present and future into a complex and polydisciplinary script. Placing the starting point of the show in advance of the actual opening, Spooner calls back to a previous work that was produced at the same place on the occasion of the Biennial of Moving Images 18 months ago (Drag Drag Solo, 2016). The London-based artist uses it to fluidly connect within her semi-retrospective, made of pieces that are added as time-loaded layers, displayed on the different floors and spaces of the institution. While existing works, including And You Were Wonderful, On Stage (2013–15) recompose a 'novel in progress', Spooner uses the Centre's movie theatre as a space for the rehearsal and announcement of a yet-to-come project, from her own soon-to-launch performance company, OFFSHORE.

‘You Have Everything to Be Learned, Everything that Can Not be Learned’
Truth and Consequences
3 February – 17 March

Drawing inspiration from both George Perec's The Man Who Sleeps (1967) and Hermann Melville's Bartleby, The Scrivener (1853), ‘You Have Everything to be Learned, Everything that Can Not be Learned’ arranges works that reflect on distance, unproductivity, and the act of stepping outside of the world. Perec's novel tells the story of a young man who isolates himself in his room, in order to think only of the world, while Melville's one recounts the well-known destiny of a scrivener who decides, one day, to remain inactive. Both are used as tools to investigate the political and social implications of gestures of silent resistance, of active stillness, in the face of the ever-active mechanisms of the liberal economy. At the centre of a constellation of works by emerging artists including Vittorio Brodmann, Alan Schmalz, Linda Voorhinde, Ulrich Wulff and Seyoung Yoon, a recent piece by major Swiss figure John M Armleder, Carl Gustav Krevatseveau (FS) (2013), stands as an icon of non-action: a clock with its hands cut out.

Yann Chateigné is a curator and writer based in Berlin. He is an associate professor at Geneva School of Art and Design.