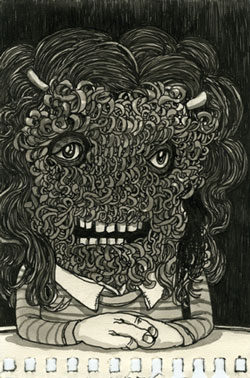 The nasty little secret is out. For those adults who, in the words of one Chicago Tribune art critic, ‘have had [their] development arrested by comics’, it seems the black sheep of the cultural family is finally being acknowledged by its self-appointed older sibling. Where artists have engaged critically with formats such as the novel, radio and television, the world of comics has been treated more like the subconscious: a realm of unrestrained fantasy whose artistic potential has been squandered by its commercial origins. The comics community, for its own part, harbours a corresponding inferiority complex, some members regarding the art world as an overpaid, over-intellectual élitist mafia. As the medium of comics is becoming more widely examined, the handful of gallery exhibitions taking it on has had to walk directly into this psychologically loaded crossfire. Since the infamous ‘High and Low’ exhibition at MoMA New York in 1990, which posited comics as a minor tributary that could only flow into the river of ‘fine art’, these exhibitions have been more concerned with inserting comics into an expanded version of art history, usually garnering more attention for what’s been excluded from, rather than included in, the show.

The Hayward Gallery-organized touring exhibition ‘Cult Fiction’, which began in Walsall’s New Art Gallery, thankfully exploits these insecurities. Its poster child is a toothy, spaghetti-faced girl from Travis Millard’s ‘Class Picture Day at the School for Hairy Faced Children’ (2004), and curator Kim L. Pace herself promotes this freak aesthetic with a wall print taken from her drawings of circus performers. With unapologetic overstatement, ‘Cult Fiction’ set out with the subtitle ‘Art and Comics’, featuring artists from both camps who shift in a dreamlike state between drawing, print, sculpture and animation, tackling subjects based on traumatic themes of abuse, repression and adultery. The show confidently displays a range of predominantly younger artists, but its anxieties seem to manifest themselves in the cramming of over 30 participants into the relatively small exhibition, making sure to include under the ‘comics’ banner such tried-and-tested residents as Robert Crumb, Joe Sacco, Dan Clowes and Raymond Pettibon.

Sets of original comic-book draft pages form the heart of the exhibition. It attempts to tackle straight-on the inconsistencies of display involved in showing artwork intended for print, with pages hung on the walls alongside their book format for comparison, allowing you to witness the underlying sketches in blue pencil, brushstrokes of ink and swipes of correction fluid. The pages, however, are presented as emblematic, de-contextualized as four or five floating components that don’t always run consecutively. The focus, apparently, is the technical skill inherent in these works. It is mesmerizing to take in the jaunty charcoal strokes of Carol Swain’s Foodboy (2004), but it leaves you with the urge to go out and get the book for a closer and more complete appreciation.

These installations are interspersed with stand-alone drawings such as the deft, flowing dreamscapes of Kerstin Kartscher and the arresting detail of Paul McDevitt’s settings, which combine a range of references to create visions from another dimension. Sculptures dot the gallery floor, fleshing out the surreal characters and objects that might occupy such a realm. Clustered in a corner, a set of brightly coloured broom handles balance on translucent, tentacle-like legs, hovering between novelty cleaning utensil and organic, alien life form. Richard Slee’s Brooms (2005) are emphatically useless, visual hyperboles with a deliberately dead-end punchline. What’s explored here is a generalized abstraction of several aspects of the comic medium, foregrounding visual manifestations of cartoon iconography. As such, ‘Cult Fiction’ largely equates comics with comedic exaggeration.

The comic is primarily a narrative medium, which acts in its engagement between a series of arranged elements that can include image and text. With the sheer amount of work in the show, the gallery is haunted by the glut of truncated narratives anchored in each material presence. James Pyman manages to work from this issue, as well as making use of comics’ print history in Wilf – A Life in Pictures (2004) by creating a character that both exists away from and comments on the drawings before us. Like Marcel Van Eeden’s daily anachronistic drawings of the multi-talented Karl Wiegand, Pyman presents us with a set of single-panel cartoons depicting world events from the 1960s to the 1990s by the fictitious half-baked editorial cartoonist ‘Wilf’. This work benefits from a fragmentary structure, but amid the misshapen creatures and crowded dystopias (not to mention the sound from David Shrigley’s maniacal Who I Am and What I Want, 2005, echoing through the entire exhibition) it seems ‘Cult Fiction’ is driven more by formal than narrative concerns.

While a growing amount of artists have been looking to the supposedly democratic distribution forms of the comic, ‘Cult Fiction’ refreshingly brings to the fore the messy tangle of fertile associations between different creative modes. The highly personal subjects addressed, however, are brought together in one broad, slapstick brushstroke. The power of an encounter with the printed comic draws on its intimate involvement of the viewer; it is precisely this intimacy that is swept under the carpet.