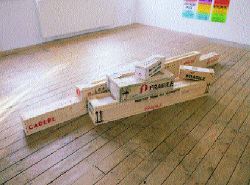 Hanging on the wall of The Approach was a small painting of a Modern interior. Closer inspection revealed it to be a picture of the gallery itself (The Approach, No. 1, 1997). It depicts, however, a rather dowdy-looking show, nothing like the one in which this painting was included. Although the work is by Andrew Grassie, it was not surprising that it was in a show by Dave Muller, an artist who makes exhibitions about exhibitions. Part of Muller's practice has always been to include the work of his friends at his 'Three Day Weekends', and to paint posters for their shows. This exhibition included such a poster, but instead of advertising the forthcoming show of a someone else, it announced Muller's next appearance, at Murray Guy in New York.

Murray Guy once exhibited Matthew Higgs' work I Wish I Could Draw (1999), one of a series of frontispieces from art books. At The Approach, Muller reproduced several different versions of Higgs' image in watercolour. Comparing brushwork and accuracy, the viewer was pushed to consider 'quality'. They were hung beside four mock posters, imaginary adverts for Andy Warhol's 1986 show of 'Oxidation Paintings' at Gagosian (He could Sell Snowballs to..., 2000). However, no such advertisement ever existed, and in place of mottled copper surfaces, Muller supplied an image often seen on LA car bumpers: the cartoon character Calvin, pissing onto the floor with his back to the viewer, but looking over his shoulder with a grin. When you remember that Warhol's work was itself a re-reading of Pollock's macho gestures (the ultimate piss-take), the force of this work appears second-hand. Muller's two-sided A Sculpture whose Front Resembles its Back (2000), meanwhile, displays on its 'back' side a framer's stamp, hanging wire and gallery label printed with the work's title, date and medium. Its 'front' side is a watercolour of what is described on the 'back'. Making a piece like this, 44 years after Jasper Johns' Canvas (1956), suggests that a work of art's status is now no longer secured by the artist, but by gallerist and framer. I was reminded of a work by David Scher that made me laugh out loud - a small can with a label that read 'Artist's Tuna'. The question was, was it shit?

Elsewhere in the show, the tone shifted. With tender affection, Muller revisited 'institutional critique', and while lamenting the lost politics of a radical period, his new works suggest fresh starts, while hinting at an ambivalent position towards the possibility of contemporary critique. At a recent art fair Muller glimpsed a pile of crates containing various pole works by Andre Cadere. Cadere insisted that these colourful objects could be displayed anywhere, in and outside of art spaces. Now they were packaged away from view. Here, with Backstage at the Hamburger Kunstverein, Late June 1996 (2000), Muller recreated the scene: a number of crates lay on the floor, each attached with a label and mock Polaroid (another watercolour sketch) of its contents. While the work acknowledges the art world's effortless packaging of critique, it presents itself not so much as a tonic as a new sculpture.

This dynamic was also evident at the show's entrance. Four cards (Untitled, 2000) announced the closure of the exhibition at The Approach, referring back to Robert Barry's 'shut exhibition' announcements from 1969. Each of the four cards is in a different font (one of which is used by The Approach). A second look at the plaques revealed that the announced dates of closure were merely the Monday to Wednesday periods when The Approach is shut anyway.

If this show flirted with nostalgia, Muller's exhibition at Murray Guy, 'Spatial', revelled in it. In a completely unexpected turn Muller transformed the gallery walls into a nocturnal skyscape, covering them with rectangular paper sheets, painted black and sprayed or flicked with white paint. Amid the stars some sheets showed night creatures or spaceships, rendered with beautiful and childlike simplicity. Though the work referenced a painterly tradition from Pollock to Olitski, nostalgia was not so much directed to an art-historical past as to childhood, to nocturnal dreams and sci-fi. The space age now seemed like another fantasy of the late 1960s - one fondly remembered.