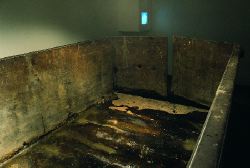 For his exhibition 'Leak into Space' David Armstrong-Six concocted a deceptively simple recipe using various components, including sculpture, installation, performance, and video. The primary ingredient was Dumpster (all works 2000), a rusting waste container that looked as if it should also be trashed. Full of gaping holes, it oozed a liquid composition of syrup, cement, detergent, and Vaseline onto the gallery floor, while two videos running successively on a single monitor in a corner of the room revealed the true nature of this home-made creation. The Soup consisted primarily of a close-up shot in which his haphazard batch was brought to a boil, while Track it Around (2000) followed a figure (presumably the artist) spilling and trailing this admixture along city streets.

'Leak into Space' continued the artist's interest in the adverse effects of constructed environments. Often incorporating structural and reflective elements as a method of raising the viewer's consciousness within these spaces, Armstrong-Six's recent work has evolved (or disintegrated) into a process whereby the structures he creates repossess the spaces they inhabit. He convolutes rather than clarifies these spaces through 'infected' installations that are rough, dirty, used and mouldy, to produce what could literally be described either as constructive criticism or a monumental mess.

By echoing the set-up through a second configuration (or second skin), they reveal inherent contradictions within each location.

Given that leaks refer to functioning systems (natural, surrogate, or man-made), Armstrong-Six has chosen to highlight natural forms of leakage by alluding to bodily functions and secretions - from spitting and drooling to puking and urinating. Where his mess originates, however, remains slightly more obscure. By negating any sense of smell, his leakages offer neither olfactory pleasure or distaste. Rather, they serve as an indeterminate mass and an undeniable mess, a quality reinforced in the artist's videos. The Soup reflects on Jackson Pollock's forceful drip paintings, though any heroic gesture is undercut by Armstrong-Six's choice of pigment. A relentlessly skewed vision persisted by way of a crooked camera angle in Track it Around, in which a lone figure continually falters and is trapped within an endless and unforgiving urban landscape.

Armstrong-Six's dirty deeds spewed out subtle obscenities against hygienic interiors and polished surfaces. While nodding firmly in the direction of monumental sculpture by exhibiting a large, ready-made object, the artist opted to obscure, rather than assume, any of its ready-made associations. Placed in an antagonistic relationship with Modernism (as though Sol Le Witt had suddenly burst his gut), its presence manifested through what was consciously

hidden and not by what was revealed. The soup lining the bottom of the dumpster, for instance, was significant by virtue of being practically non-existent, gradually producing a topographical map of collective experience and human waste. Consequently, both the artist's videos and sculpture were time sensitive, existing in retrospect as much as they did in 'real time'.

By integrating some form of tracking device, 'Leak into Space' suggested a narrative sequence where the viewer's absence was crucial in allowing physical, psychological and conceptual realms to merge.

The show highlighted the subtle interplay between various dimensions: how imagination leaks into reality, how the psychological infiltrates the physical realm, and how concepts constitute their own form of construction.

His empty container echoes the natural form of the existing space and by assuming the historical weight of the gallery, questions the idea of objects placed within this pristine, sanctioned space as the primary site for cultural investigation. However, if Armstrong-Six was truly denouncing all this as conceptual garbage, the doors leading inside the dumpster would have remained shut. Willing us to enter a space outside our personal experience, it offered a physical clue (or glaring truth) about the refuse that oozes from a larger body - the social or psychological body that serves to control or pollute civic spaces.

Perhaps Armstrong-Six is ultimately implying that art implicates its immediate environment and that this heightened sensitivity constitutes a leak into the space of the subconscious. Rather than overwhelm the gallery through his consumption, he contrives a subtle infiltration, despite the size of its component parts. In echoing the set-up, Armstrong-Six highlights how space exists to determine how we function within its confines, or perhaps, as his 'character' demonstrates, do not function at all.