At the John Hope Gateway building in the Royal Botanic Garden Edinburgh (RBGE), an exhibition of posters and invitation cards charts the last 30 years of Inverleith House, the robustly beautiful 18th century building that RBGE took over in 1986 and was previously home to the Scottish National Gallery of Modern Art. The exhibition includes posters for Roni Horn, Philip Guston, Ed Ruscha, Cy Twombly, Lawrence Weiner, Franz West and many more. Mapped out on a wall is a timeline of three decades of activity – a record of the art and ideas that have poured forth from this uniquely situated building, perched on a gently rising mound near the main entrance to the gardens.

Yet while this additional 30th anniversary exhibition celebrating Inverleith House’s achievements is scheduled to continue until December, the party is already over. With just a few days notice, on Sunday Inverleith House gallery itself closed, its time as one of Scotland’s key spaces for contemporary art coming to an abrupt end with a bland and perplexing statement: ‘After considerable consideration […] Inverleith House will no longer be dedicated to the display of contemporary art, and RBGE is looking at options for the alternative use of the building.’

The surprise nature of the announcement suggested a naive hope for a fuss-free transition from renowned gallery space to the building’s as yet unspecified alternative use (a wedding venue seems to be many people’s best guess). Yet the outpouring of disbelief, sadness and anger at the decision has ensured that Inverleith is not going quietly. Sunday saw a mass visit and protest by hundreds of gallery goers, and a petition calling for the decision to be reversed has more than 8,000 signatures so far. A meeting on Tuesday of Edinburgh City Council’s culture committee said it would investigate the closure of the ‘much-loved and deeply valued’ venue, and Scotland’s art community has been loudly voicing its opposition, including those artists who have exhibited at the gallery.

Luke Fowler, whose 2012 Inverleith House show saw him nominated for that year’s Turner Prize, is one of them. ‘I am shocked and dismayed at this decision,’ he says, describing the closure as a triumph of ‘bland populism’. While the decision has been presented as essentially financial – the full RBGE statement talks of removing ‘the various inevitable financial risks attached to running a high-profile gallery’ – Fowler is unconvinced. ‘I imagine there is some sort of hidden motivation that, with all that beguiling contemporary art out of the way, the gardens can become a backdrop for wedding photographs and bourgeois tea parties. Yet myself and generations of the public have been coming to the Botanics to appreciate and be confronted by avant-garde, contemporary art – either under [Director of Exhibitions] Paul Nesbitt's direction or in its previous incarnation as the Gallery of Modern Art.’

‘Myself and generations of the public have been coming to the Botanics to appreciate and be confronted by avant-garde, contemporary art.’

Inevitably, the question of arts funding and the use of public money hangs over the decision. Since 1994, Creative Scotland, and previously the Scottish Arts Council, has contributed £1.5m to gallery. From 2011–16, annual funding of the exhibition programme has averaged £88,000, while in 2003 £148,453 was awarded towards the cost of upgrading visitor facilities. RBGE – which is directly funded by the Scottish Government, receiving total grant-in-aid of £11.525 million in 2014–15 – pays the wages of the gallery’s two full-time staff (who remain in post despite the closure, their future roles as yet unclear) and covers the running costs of the building (the top-floor office space is also used by other RBGE staff). Closing the gallery, then, would seem to deliver no obvious or immediate cost saving. 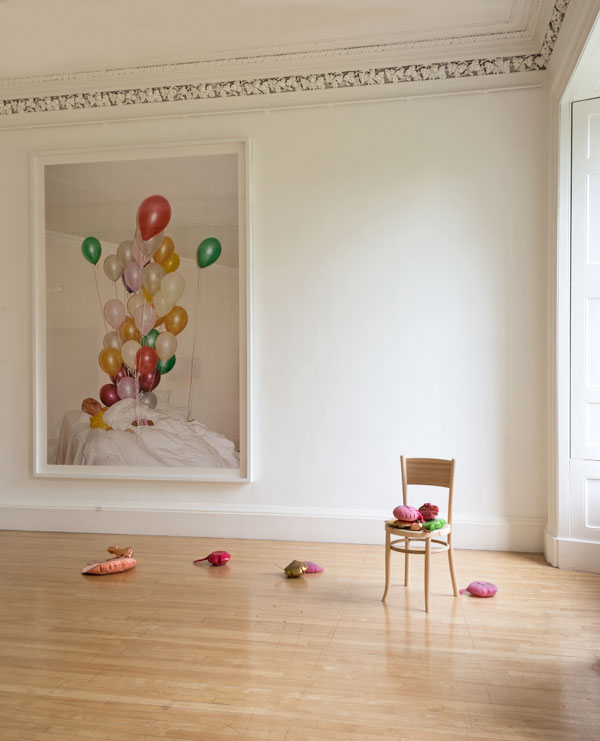 A decision by Creative Scotland in 2014 to reject Inverleith’s application for regular funding – as opposed to annual – for the 2015–18 period may have inadvertently played a part in the gallery’s demise. There has clearly been a shift in thinking within RBGE that has concluded that an internationally renowned contemporary art gallery within its grounds is surplus to requirements, and the uncertainty that comes with annual funding applications is unlikely to have helped. ‘It’s quite astonishing that a gallery that has delivered such a consistently high quality programme has been allowed to fail by Creative Scotland and partners,’ comments Toby Webster, director of Glasgow’s Modern Institute. ‘It has constantly delivered far beyond most other organizations here [in Scotland] whilst on a very low budget. Other countries would support and help develop a venue such as this not squeeze it into oblivion.’

‘Other countries would support and help develop a venue such as this not squeeze it into oblivion.’

Creative Scotland, meanwhile, has said it is ‘very disappointed’ by the closure, and had hoped that ‘the value that Inverleith House brings to the gardens, to the public, and to Scotland as a space for art and creativity could have been better recognized and result in a different decision.’ In October 2015, the funding body supported the commission of an independent strategic report to look at the feasibility of developing a ‘sustainable model’ for the 2016–21 exhibition programme at the gallery. The report is expected to be published on the RBGE website next week, along with the minutes of the 5 October Board meeting that took the decision to close Inverleith House, leaving its 30th anniversary exhibition of work by over 35 artists, ‘I still believe in miracles’, as a poignant full-stop.

Sorcha Carey, director of the Edinburgh Art Festival, believes the gallery’s absence will be keenly felt. ‘Its summer exhibitions have been undisputed highlights for festival visitors over the years,’ she says. ‘The loss of such an important gallery space will leave a significant hole in our capital city’s cultural landscape and will be sorely missed by artists and audiences alike.’ The writer Maria Fusco, a Reader at Edinburgh College of Art, echoes this view: ‘I am dismayed at the closure of Inverleith House, which has consistently exhibited work of the highest international calibre. Fellow artists, critics, writers are rallying to support a gallery which embodies John McGahern's wise idiom that everything interesting starts in one place.’

Brussels-based artist Nicolas Party presented a solo show, ‘Boys and Pastel’, at Inverleith House in 2015. He is unequivocal in his admiration for the gallery, describing its demise as ‘heartbreaking.’ He continues: ‘Having the chance to show work in such an amazing building was, I think, a very special experience for all the young artists who showed there. Paul [Nesbitt] is also a very special and beautiful and amazing character. He is a true art warrior who fights for poetry in the world. Very sad that he lost this battle; very proud that I was fighting for him once.’

The petition to save Inverleith House can be found here.

Opinion
Did the Pandemic Reinvent the Human Face?

Opinion
What Consistency Can Teach Us

Opinion
Reconfiguring the Present: A 2020 List of Other Futures

Opinion
Did the Pandemic Reinvent the Human Face?