Q: What should change? A: Can we banish greed? 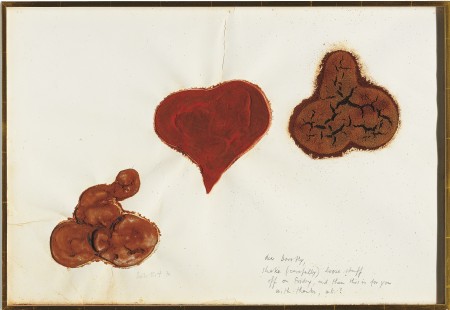 If you could live with only one piece of art, what would it be?
A work Dieter Roth made for me in 1970.

What was the first piece of art that really mattered to you?
I was so enriched by so many works in my first years of discovering the art of the world, that it is difficult for me to name the first one. While thinking about this question, though, the Great Stupa of Sanchi (built between the 3rd century BC and the 12th century AD) sprang to mind. I saw it in India in the early 1960s, and although I did not then know its significance to Buddhism, I loved the structure and have always remembered it. Almost 25 years ago, while studying Buddhism for the first time, I learned that a stupa – originally a repository for the relics of revered persons, and intended to inspire later generations to follow the path to enlightenment – evolved to become a symbol for the embodiment of all knowledge. It is said that once you see it, you never forget it.

What do you wish you knew?
In the realm of aspiration: to realize the nature of reality.

What should change?
Can we banish greed?

What should stay the same?
When I was young I wanted Eros to be durable – I even claimed it was, citing William Shakespeare’s Antony and Cleopatra (1623), which many consider his highest poetic reach. Now, even though there are some things I would like to remain unchanged, I know that nothing stays the same. Over the decades, I have watched the images on the painting Dieter made for me gradually lose their substance as the fallen grains of cocoa powder accumulate under the glass on the ledge of the frame. Their loss is slowly revealing the colour of the paint underneath and somehow the picture has become not only more moving, but more beautiful to me.

What could you imagine doing if you didn’t do what you do?
All the things that I like to do, I have brought together in my work, although one unrealized aspiration – the greatest one surely – which I have already mentioned, still awaits the passionate dedication I have given to the fulfilment of my other longings.

What are you reading?
Norman Mailer’s Genius and Lust: A Journey Through the Major Writings of Henry Miller (1976). When I first read the book in the 1970s, I did not appreciate the grandeur of Miller’s prose. And, also once again, The Time of Our Time (1998), an enormous retrospective of Mailer’s fiction, philosophical and political essays and journalism. The book confirms a long-held opinion that, as Emmett Williams once remarked to me, ‘He’s the best we have.’

What is art for?
A world without art? When I started to think about that scenario, a line from an old song immediately came to mind: ‘I don’t care what they say, I won’t live in a world without love.’ Here’s looking at you, kid.

Dorothy Iannone is an American-born, Berlin-based artist whose work focuses on explicitly erotic and autobiographical imagery. In 1967 she left New York for Europe to be with Swiss artist Dieter Roth, with whom she had fallen in love in Iceland. This year two exhibitions – the first survey shows dedicated to the artist to be held in the USA since 1967 – have opened at Anton Kern Gallery and the New Museum, New York. Iannone’s work is currently included in two group shows in Berlin, Germany: ‘Die Kunst ist Super!’ (Art Is Super!) at the Hamburger Bahnhof – Museum für Gegenwart, and ‘Access All Areas’ at Galerie Max Hetzler.