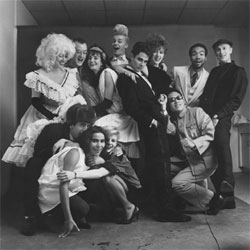 Now that downtown Manhattan is firmly in the grip of gentrifying landlords (a former Warhol superstar, Baby Jane Holzer, among them!), it seems fitting that one epochal exhibition from recent decades was called ‘The Real Estate Show’, and that the cops shut it down soon after it opened in 1980. ‘The Downtown Show: The New York Art Scene, 1974–1984’ attempted to evoke life below 14th Street at a time when the city was in crisis but artists, tasting freedom, were creating an intoxicatingly inclusive scene. Those who were there can best vouch for the success of some of the work in events such as ‘The Real Estate Show’, but even many who arrived after the mid-1980s sensed the excitement lingering in the air like smoke after a bonfire. Extending from the year Lynda Benglis brandished a fleshy dildo in the pages of Artforum to Ronald Reagan’s re-election, that decade witnessed a wealth of destabilizing movements and categories, including Punk, New Wave, No Wave, neo-Expressionism, Pictures art, graffiti, Feminist art and loft jazz.

The New Museum’s 2004 show ‘East Village USA’, which academically explored some of the same territory but addressed a less metaphorical landscape and narrower scene, petered out disappointingly in the space reserved for documentation and ephemera. This show was less focused, but its intentionally hectic sprawl was anchored by the poignancy of the objects included, many of them borrowed from the university’s sizeable collection of downtown materials. Items on display included a David Wojnarowicz diary and one shared by Richard Hell and Patti Smith, early issues of magazines such as Raw and Bomb, invitations to shows at long-vanished venues such as the East Village’s Fun Gallery (a haven for graffiti art), a Ramones letterhead, books by Lynne Tillman, Gary Indiana and others, and small pungent pieces produced as affordable art works by collectives such as Colab: artefacts that summon faces, dates, rooms, streets, smells, sounds, interactions. The show’s casually pinned wall labels reflected the irreverent, counter-professional presentation of much art of the time.

A volume of Sol LeWitt’s Photogrids (1977), documenting patterns in the urban landscape, confirmed the show’s eclecticism, but critic Carlo McCormick, one of the curators, writes in the catalogue: ‘Inherently anti-institutional, perversely aware of the forces of co-option [...] nonhierarchical, and pathologically unfixed, “Downtown” was a discourse on the nullification of absolutes that needs the full cacophonous chorus to be heard.’ Work was grouped into eight multivalent themes. ‘Sublime Time’, for example, strove to evoke ‘mesmeric and meditative’ music and art as well as an atmosphere in which time itself seemed mutable. A Jack Goldstein canvas depicting warplanes crossing a night sky and a Sarah Charlesworth photograph of a woman plunging from a building, both echoing the transfixing power of media representation, resonated surprisingly well with a Peter Halley cell/conduit painting. Another section, punningly titled ‘Salon de Refuse’, juxtaposed former street kid Thomas Lanigan-Schmidt’s elegant rat and faux jewels, crafted from foil and cellophane with David Hammons’ lump of elephant dung embellished with paint and gold leaf.

Cross-fertilization was the name of the game. Artists, gallerists and poets were in bands; club kids staged performances; musicians starred in movies and inspired filmmakers. Super 8 movies, including ironic spectacles by No Wavers such as Eric Mitchell, revitalized experimental filmmaking. As critic J. Hoberman wrote in 1981: ‘the Super 8 “no wave” infused New York’s avant-garde scene with a populist energy that had been largely absent for a decade.’ In what some might view as karmic justice, Structuralist cinema was only present in the show in Carolee Schneemann’s Interior Scroll (1975), the text she famously pulled out of her vagina, which recounts a put-down by a male Structuralist filmmaker.

What has been lost since then? Not only is such freewheeling interdisciplinarity in short supply, but those who purport to critique the establishment are often firmly ensconced within it. The Wrong Gallery’s meta-exhibitions in a shallow space beside a respectable Chelsea gallery hardly seem subversive when one remembers the feisty East Villager Gracie Mansion’s antic actions, showing art in a limo outside Leo Castelli Gallery and in her loo. The art may have varied in quality, but consistency was hardly the point when a cultivated appearance of amateurism sometimes was. AIDS and the ‘culture wars’ would cast an undeniable pall over the ensuing years, and a professionalized art world would emerge at the other end. However, in the gritty landscape directly engaged with by the works documented in ‘The Downtown Show’, including Gordon Matta-Clark’s cuts and Richard Hambledon’s shadow graffiti, the here and now was everything.