What happens when design collectives start acting like artists? 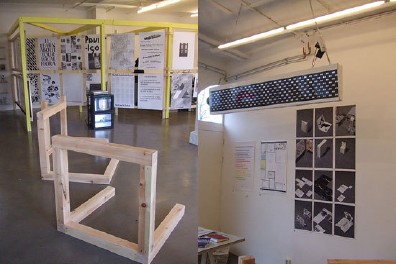 Once upon a time it was easy to distinguish design from art: designers had briefs from clients, practical problems to solve; artists found their own problems. But something has been happening to design – something as significant, in its way, as what happened to painting when photography came along. It’s been getting more conceptual, more playful, more self-directed, less tied to clients, less servile, less practical. Design is, you might say, having its Marcel Duchamp moment.

When Dexter Sinister – an art-design collective founded by the makers of design review Dot Dot Dot – were approached last year to do something for the 2008 Whitney Biennial, the curators gave the team a rather unusual choice: they could design the biennial catalogue, or they could be artists in the show. Feeling that giving the catalogue shape and form – the traditional role of the graphic designer – would be limiting, Dexter Sinister instead opted to set up an alternative press office during the biennial, a document-processing unit in a paneled room. Like some weird amalgam of Kafka, Lewis Carroll, and Pynchon, the Commander’s Room, for the three-month duration of the biennial, became a semi-official parallel world producing documents-as-art. In a similar blurring of boundaries – ‘performative publishing’, they call it – the group produced Dot Dot Dot‘s 15th issue live in a Geneva gallery.

There are many reasons this shift is happening now. Dexter Sinister, in an interview about their Geneva performance, gave an interestingly practical one: when they moved from the Netherlands to the USA, they were no longer able to get state subsidy for their mostly non-commercial activities. The move towards the art world was a way to get funding; they shook the institutional tree.

In an age when computers make simple graphic design tasks accessible to non-professionals, professional graphic designers have diversified as a distinction strategy. Designers like London collective Åbäke and Alex Rich have turned increasingly to teaching, workshops, cooking, and conceptual projects made for their own pleasure (and their portfolios): exchanging plants at Columbia Flower Market; turning human limbs into typography; making guerilla repairs to broken park benches. Rich calls these projects ‘gentle interventions’.

There’s freedom from the tyranny of the client and the brief in design-for-teaching (Åbäke have spent much of the last year at the Royal College of Art’s Communication department), but also in design-for-exhibition – when I interviewed Icelandic design collective Vík Prjónsdóttir earlier this year about their whimsical design products (balaclava hats with moustaches built in; blankets shaped like volcanoes), half of them were in New York retraining to be artists. Since their work is already conceived with exhibitions and magazine coverage in mind, the leap to the art world will be a small one.

There’s another reason design might be sidling up to art, at least in the west. Increasingly, we’re seeing design-for-production heading east to workshop nations like India and China. Sure, a lot of products (the very computers, for instance, that allow anyone to be a graphic designer) are still designed in the west and manufactured in the east, where labour costs are lower. But the lower-profile products which surround us are increasingly designed in the places they’re made in. Given their increasing distance from pragmatic production, western designers have had to find new roles, just as painters did when photography freed them from the demands of mimesis. Design has, as a result, arrived at its own kind of abstraction – a freedom from the object.

‘We do wonder whether graphic design is a job for life,’ Åbäke told me in an interview. ‘Could it be that we are anticipating graphic design’s visual obsolescence by cooking, teaching, editing, owning a record label and so on?’

At the same time, ethical concerns have also led a young generation of designers away from the guilt associated with unsustainable consumerism. The 1999 ICA exhibition ‘Stealing Beauty: British Design Now‘ caught the beginnings of a turn away from design as a signifier of prestige and status. ‘Over the past few years,’ wrote curator Claire Catterall, ‘design has offered an instant passport to a sophisticated image: you spend your money and you get the look.’ ‘Stealing Beauty’ offered recycled, cheap and secondhand goods instead, but failed to avoid the post-materialist paradox: attempts to snub status-seeking quickly become new claims to status.

If design’s move towards the abstract has been modeled on art’s successful popularisation of its once-difficult conceptual wing, it’s also borrowed critical rigour from architecture. The recent – and influential – ‘Forms of Inquiry‘ exhibition started at London’s Architecture Association, where its curator, the graphic designer Zak Kyes, is an art director. Subtitled ‘The Architecture of Critical Graphic Design’, the exhibition invited 19 graphic designers to make ‘inquiries’ into ‘the shared lineage between graphic design and architecture’. James Goggin used Ellsworth Kelly’s proposal for Ground Zero (a green void) to present ‘building nothing’ as a valid architectural gesture, Åbäke made a pseudo-metal t-shirt printed with the words ‘Pruitt-Igoe’ to signal the end of Modernism in the demolition of Minoru Yamasaki’s public housing projects.The elegantly serious asceticism made the show feel like a Liam Gillick installation.

Art-ready inquiries and interventions, performative publishing, conceptual and abstract design distanced from objects, briefs or clients; what one thinks of all this depends on whether one thinks design freed from production might lead somewhere interesting. The meeting of art and design could combine the worst of both worlds (pretension, intellectual over-compensation, in-jokes) or the best.

When Berlin designer Rafael Horzon teamed up with writer Ingo Niermann to form REDESIGNDEUTSCHLAND, their grandiose, pseudo-Modernist projects included the decimalisation of time, the simplification of the German and English languages, and a comprehensive new industrial standards unit. The team split up before achieving their final ambition: ‘REDESIGNWORLD’. Design’s connection with practical logistics in the real world raises the stakes, when it gets conceptual, high indeed.

Nick Currie is a Scottish-born musician and writer based in Osaka, Japan. Recording as Momus, he has released 23 albums and is also the author of The Book of Scotlands (Sternberg Press, 2009) and The Book of Jokes: A Novel by Momus (Dalkey, 2009). He is currently working on a film script.

Profiles
How Artists Are Re-Imagining Basketball