The Five Poetry Books You Should Read This Summer

Ariana Reines’s poetry is powerful and immediate: the language moves quickly; the lines seem to relay experience and the address is direct. It’s also technically accomplished; it takes a lot of artifice to create a sense of relentless urgency. At 400 pages, this is especially true of A Sand Book – the poet’s first collection in eight years – which never slows down. Line by line, poem by poem, section by section, the book barrels forward with little interest in larger narrative arcs or orderly trajectories.

That said, there is formal and thematic consistency. Topics come up repeatedly, even insistently. The alienation of online life is alluded to throughout, and is the explicit subject of the first poem, ‘A Partial History’, an extended plea for connection which rails against social media mean-spiritedness: ‘A vast unpaid army / Of self-destructors, false comrades, impotent / Brainiacs who wished to appear to be kind / Everything we did for our government / And the corporations that served it we did for free / In exchange for the privilege of watching one / Another break down.’ Against cold and static forms of communication that have been imposed on us, Reines’s poetry dives through intimate relationships (loving, casual and traumatic), traveling between distant people and places in search of connection. That search accounts for the speed of the poems, their eagerness to bring parts of experience into relation. A Sand Book is not interested in whether relationships last, or whether places become home: it celebrates the reality of the fleeting, the urgency of the transient.

Michael Field was the pseudonym of Katherine Bradley (1846–1914) and Edith Cooper (1862–1913), a late Victorian couple who, over decades, co-wrote many volumes of poetry and plays. Friends with Robert Browning, Walter Pater and Oscar Wilde, they were Aestheticists and Catholics committed to the beauty of art, which they viewed as an end in itself. As the poet Stacy Szymaszek points out in her introduction, it’s difficult to reconcile an ‘art for art’s sake’ position with our own times, in which there seems no time for decadent reverie. But if Aestheticism feels anachronistic, the poems gain contemporary relevance in their understanding of the natural world as a sensorial experience beyond rational comprehension, as in ‘A Violet Bank’: ‘for if a flower should speak / At its full height and richness of perfume / We could not listen, so on brow and cheek / We rested by the very senses’ doom.’

In many ways, the erudition of these poems might prove more of a barrier for readers today than their decadence; wading through the classical references and religious symbolism is no easy task. But Field’s poetry remains urgent for its insistence that love, knowledge and the senses are inherently valuable, requiring neither explanation nor justification. Love, for Bradley and Cooper, exceeds both individuality and the couple-form, as evidenced in ‘Whym Chow, Flame of Love’, a long poem commemorating the death of their beloved dog: ‘I did not love him for myself alone: ‘I loved him that he loved my dearest love. / O God, no blasphemy / It is to feel we loved in trinity.’

Brandon Shimoda, The Grave on the Wall (City Lights Publishers)

In lyrical prose, somewhere between travelogue and family history, Brandon Shimoda traces his grandfather’s life as it intersects with US immigration policies and wars. Ineligible for citizenship because he was a Japanese national, Midori Shimoda lived most of his life in the US and was incarcerated in the Fort Missoula Internment Camp, where about 2,000 Japanese and Italian citizens were arbitrarily held during World War II. Shimoda travels there and to other places that figure in his grandfather’s life, from the small town in Japan where his ancestors lived, to Hiroshima where Midori was born. In each place, Shimoda reflects on the ways that history is memorialized and erased.

The Grave on the Wall embraces dreamlike logic, suggesting continuity between subjective association and historical coincidence. Before his arrest, Midori escapes to a friend’s farm near Monticello, Utah, where uranium was produced for Los Alamos. Shimoda highlights such concurrences in tender, quiet sentences, which evoke mystery without sensationalizing chance: ‘Are ghosts anomalous to the rule of life? They remind us that life is a compositional process, with seams and fissures between moments. The seams and fissures allow for ghosts to emerge – through the rage, regret, foreclosure, the infinite spoils of the soul, of the living.’ Intergenerational knowledge must be actively sought, researched and retrieved – it’s not a given. But while attentive to the work of remembering, Shimoda also writes through the slipperier terrain of experiencing one’s ancestry in the present, never fully manifest but felt and lived. 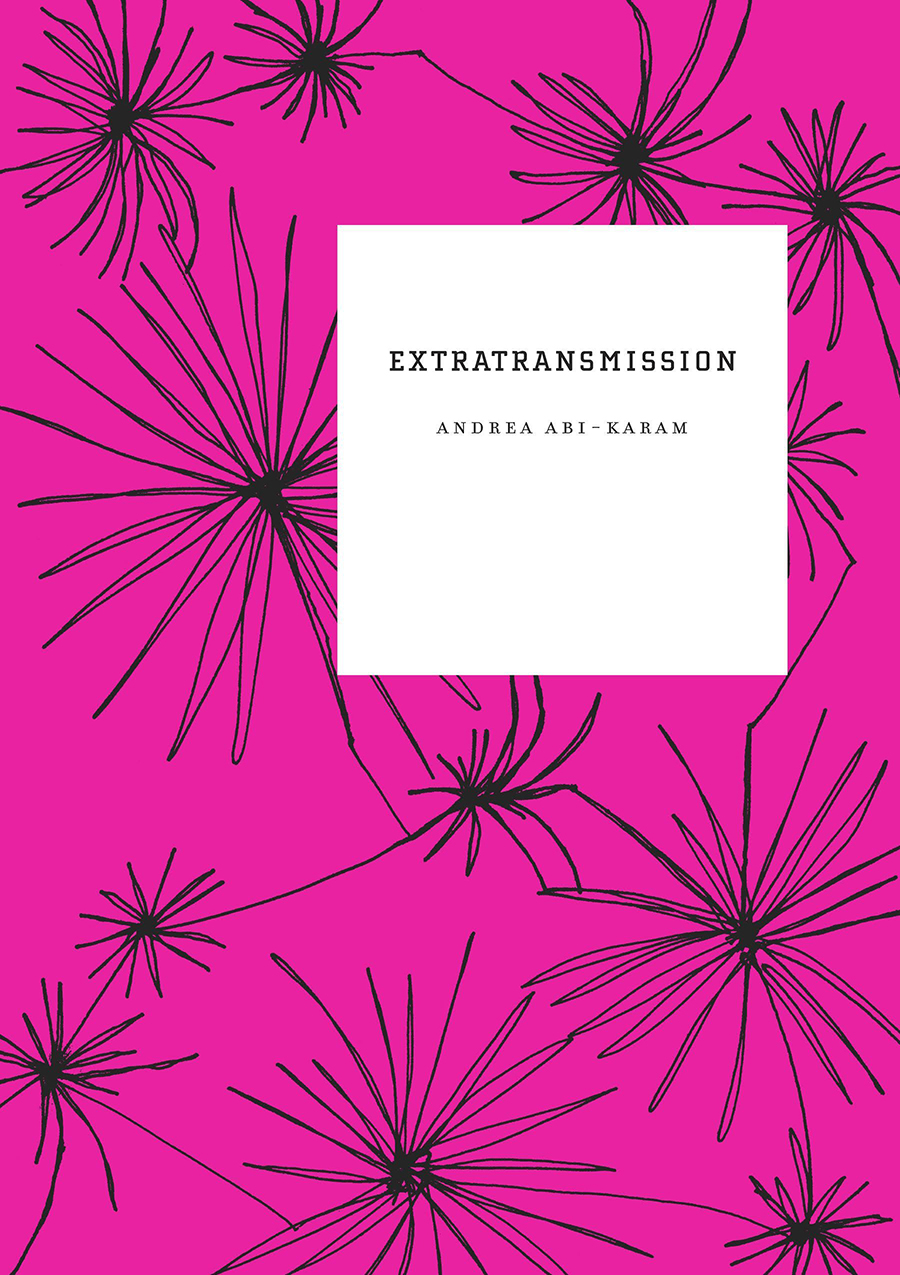 Andrea Abi-Karam’s EXTRATRANSMISSION approaches the trauma of gendered and militarized violence by zooming in and out simultaneously: from vengeful desires directed at masculine figures (cops, music bros, tech bros, other myriad bro types) to horror at the intricacy and reach of algorithmic power. After opening with an energetic series of cathartic revenge fantasies, the book swerves into sci-fi allegory. In these poems, corporate technology’s relationship to control is not abstract or theoretical, but corporeal and gory, as in these lines from ‘Fusion’: ‘i take a new razor blade out of the package from the hardware store and make an incision on my forearm close to the inside of my elbow. i massage it open. i pull the wire out slowly – do not to pull anything else out at this time. the wire is wet from being inside my body.’

Abi-Karam’s work does not gawk at the situation of mass surveillance, paralyzed by shock. Instead, they ask: ‘how to become a new glitch, a new disruption?’ There’s no clear answer, but EXTRATRANSMISSION suggests a way forward through an excess of affect that disrupts polite acquiescence, and the adoption of multiple perspectives that disrupt one’s limited view. Most surprisingly, the last quarter of the book includes a sequence from the point of view of a therapy horse. The poem is concerned with animal subjectivity, implying that one’s wounds cannot be repaired by turning an animal into a healing technology. As the title poem states, ‘WHICH CAME FIRST / THE INJURY OR THE TECH? / THE INJURY / IT’S ALWAYS THE INJURY.’

In Love Three, Aaron Kunin offers an extended reading of a devotional poem by George Herbert, attentively drawing out complex relationships between power and submission. Herbert’s poem ‘Love (3)’ is a dialogue between Love and an unnamed narrator who repeatedly declares their unworthiness, until finally commanded to accept Love’s offering: ‘You must sit down, sayes Love, and taste my meat: / So I did sit and eat.’ Kunin plays with the inherent eroticism of this image, but his primary concern is the pleasure (and the contradictory feelings of agency) involved in giving oneself over to power: ‘I wanted to write about “Love” (3) because I thought people were confused about power. Everywhere I went, I heard people talking about power … my friends were not sure whether power was a desirable thing. They were not sure whether they were allowed to say that they liked power.’

Examining his own interests in bondage and humiliation, Kunin jumps from interpretations of Herbert’s poem to arguments about the inconstancy of power and the possibility that submissiveness can (in certain situations) reverse or twist hierarchies. Most importantly, Kunin posits that the desire to submit is not a psychological flaw or an ideological illusion, but is grounded in an understanding that love is not a matter of equality, but of the exploration and invention of compatibilities: ‘This is the lesson of consensual sadomasochism for students of human relationships: compatibility is more important than mutuality.’ Part literary criticism, part fragmentary autobiography and part theory of sexuality, Love Three is a beautiful, thoughtful book, and a great example of interpretation as an act of creation.