Charlotte Prodger’s practice is a little like the process of making remixes. Working with ripped YouTube videos, 16mm film, spoken-word narratives and text, the Glasgow-based artist produces works that are both discrete entities and versions of one another. Certain personal vignettes – late-night tales of going to nightclubs, reflections on musical discoveries – crop up time and again, always in different permutations. Like the characters in these stories, the materials she uses and reuses in her installations (such as a boombox or a slick-looking speaker) become almost familiar presences.

For Prodger, this process of evolution relates not only to the reworking of motifs, but also to the development of identity. Tropes of queer subjectivity permeate the narrative strands and subcultural histories she often draws upon. In her solo exhibition ‘Percussion Biface 1–13’ (2012) at Studio Voltaire in London last year, one monitor showed a ripped video of a sneaker-clad man scraping his immaculate Adidas trainers against a slab of bedrock – a strangely sexualized and ritualistic act (though one that is not uncommon within a particular fetishist subculture that proliferates on user-generated platforms such as YouTube). Elsewhere was mobile-phone footage taken by an unseen enthusiast running through a field to test the sound ‘throw’ of a Sharp GF-777 boombox. Prodger sets these unedited video clips against an independently looping voice-over, which describes YouTube documentation of yet another unexplained material undertaking: the process of fastidiously chipping away at a piece of shiny black rock to form a primitive hand tool known as a biface.

Although Prodger only began using YouTube clips in the past year, narrations of various sneaker fetish videos had already found their way into the recorded soundtracks of her 16mm films like handclap/punchhole (2011). The process of writing lies at the heart of her practice and, in her scripts for voice-overs, she often mixes in comments posted in response to the videos she appropriates – a kind of social context – with a collection of personal histories and descriptions of the physical elements of her installations. Language builds cross-associations between image, sound and material.

Personal anecdotes, often diaristic in tone and narrated by the artist herself, run like currents through these works. One in particular, about going dancing with a friend at an ‘old-school gay club’, resurfaces over and over. This engagement with deeply personal experiences rubs up against the aestheticized formalism of Prodger’s pared-back floor-based installations – in which the rectilinear forms of the boombox, monitors, speakers and projector seem to mimic minimalist sculpture – as well as against her consideration of structural film’s legacy today.

Before she began using appropriated digital imagery, Prodger worked almost exclusively with 16mm film for about seven years. While structural film’s formal concerns are prominent features of her work, its subject-less flow of images is simultaneously reinvested with content and infused with queer subjectivity. For example, her 16mm film and tape installation handclap/punchhole openly references Tony Conrad’s seminal 1965 film The Flicker: a sequence of alternating black and white frames sets up a sort of ‘architecture’ for the film, like columns punctuating a space; woven between these intervals, footage shows an androgynous figure using a mirrored trolley to survey a cathedral’s soaring vaulted ceiling. Much in the same way that The Flicker deconstructs the moving image into its constituent frames, the mirror device only allows for the whole to be known through an examination of parts. Prodger’s treatment of the body, often fragmented or half-obscured, likewise mirrors this movement between part and whole, yet also extends it to one between desire and restraint. 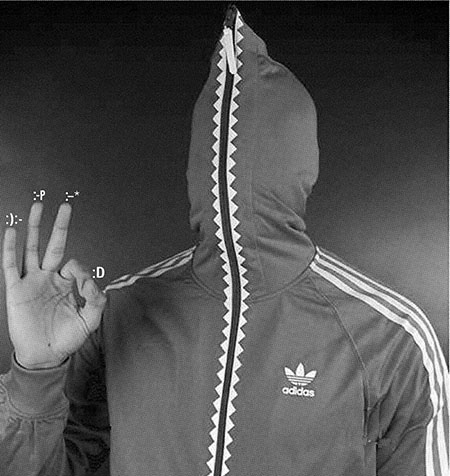 First shown last year as part of the Glasgow International Festival of Visual Art, :-* (2012) is fraught with a similar tension. As in ‘Percussion Biface 1–13’, two Hantarex monitors sat on the gallery floor playing ripped videos. The first documents a YouTube user (whose username is NikeClassics) dissecting a sneaker, meticulously slicing it down the middle to reveal every constituent part, while the other shows the same footwear fetishist and his boyfriend entwined in flirty footplay as they swap identical trainers. The shots are carefully framed such that bodies are cropped and identities are never revealed: their gestures are strung between narcissism and self-consciousness, intimacy and anonymity.

This sense of withholding or detachment also underlies the relationship between image and sound in Prodger’s films. The disconnect between the human body and voice is already implicit in the artist’s use of the recorded voice-over, and the use of non-diegetic sound further breaches the rift between what’s seen and what’s heard. In handclap/punchhole, for instance, the displacement of sound and image is taken to the point where they play out in inverse relation to the other: image is only present when sound is not, and vice versa. Prodger also renders this decoupling of image and sound physical, by making their separate operations irreducibly distinct in the gallery space (even in recent 16mm films, she seldom uses the optical soundtrack). In both handclap/punchhole and :-*, a cassette tape – which must be manually turned over every half-hour or so – plays through a boombox, completely unsynched from the film projector or monitors that emit silent images.

The effect of this distancing between sound and image again harks back to the question of part versus whole, and structural film’s imperative to disrupt the cohesive narrative of cinema. Prodger presents a slipstream of fragments that play with and against each other to produce an elusive enquiry into the contingency of intimate materials.

Charlotte Prodger lives and works in Glasgow, UK. She is currently included in ‘Frozen Lakes’ at Artists Space, New York, USA (until 24 March). In 2012, she had exhibitions at Studio Voltaire, London, UK; Intermedia, Glasgow; and Essex Street, New York. In 2015, she will have a solo exhibition at Inverleith House, Edinburgh, UK. Prodger is a member of the writing group Brown Study, and was a founding member of the band Muscles of Joy.