Alternative studies of continental branding, subjectivity and our data-driven societies

In 2001, AMO, Rem Koolhaas’s Rotterdam-based research studio, proposed a new logo and flag for the European Commission: the barcode. More than a decade later, the sarcastic ‘€-conography’, as it was labelled, still casts its spell. Not just because European identity and politics are dominated by the markets, but also because barcodes – digital representations of data – are apt symbols of our data-driven societies. Data mining now allows increasingly accurate analysis of individual behaviour, consumption and connections, by extracting useful models or ‘patterns’ of information.

The Warp and the Weft (2012), an installation first shown by Danilo Correale at Peep-Hole in Milan (in a joint exhibition with Anna Franceschini), operates as an alternative study in continental branding and coding. Based on information retrieved online and from banks, its results are systematic, potentially faulty and arbitrary – ‘data subjectivity’ being the new existential condition of all ‘digital humanists’ of this century, artists included. The work comprises five custom-made tartan fabrics, each representing a world zone (North America, South America, Africa, Europe, Asia – a new project on Australia is in progress). Each weave is based on the Pantone colours of corporate logos associated with the five most powerful banks in each region: the higher their assets, the stronger their chromatic dominance. For instance, given the pervasiveness of Deutsche Bank, HSBC Holdings, BNP Paribas, Credit Agricole and the Royal Bank of Scotland, Europe’s plaid is an unmistakably blue and green affair. Tartans are traditional clan symbols, but (as artist Nick Relph pointed out in his 2010 book Vestiarium Scoticum) their mid-19th-century revival was due to the marketing strategies of the Stuart brothers, who falsely claimed a correspondence between ancient Scottish families and their own ‘original’ textiles. Correale’s choice of tartan as a medium for visual analytics is therefore sly: corporate identities are finance’s bespoke attire, its global dress code. By using them to demonstrate territorial economic wars and intersected relations, the artist opts for a less benign version of the same codes. 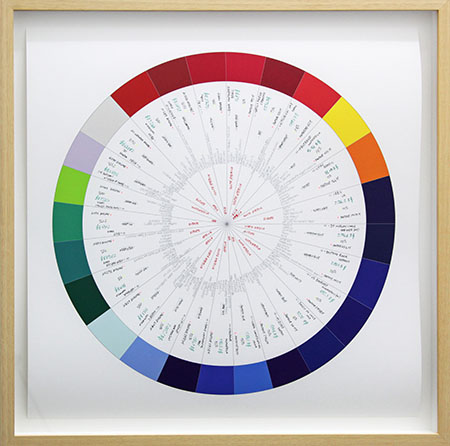 In the statement accompanying his portfolio, Correale describes his work as an attempt to open up new interpretations of ‘the modes of production of today’s subjectivity’. He deconstructs macro models in order to verify them at micro scale, as if to materialize the abstract figures of social indexing. His video The Surface of My Eye is Deeper than the Ocean (2011) scrutinizes, in tight close-ups, the expressions of seven instant-lottery players, filmed while compulsively scratching a pile of silver tickets. Correale spent most of his production budget on the purchase of 600 tickets, which he donated to the participants; their only obligation was to share all eventual gains with each other and the crew. In the end, this was roughly 30 euros each: a small sum, especially when compared with the cost of the overall scheme – legal gambling is Italy’s third industry, with an annual revenue of around 80 billion euros. Correale’s style isn’t documentary: the camera’s slow, inquisitive movements build an atmosphere of forced suspension, capturing a behavioural loop of high expectations, trial, error and frustration.

Correale works in cycles across different media: photography, video, performance, text and installation. His enquiry into the rhetoric of economy also includes We Have a Business Proposal of Twenty Two Million, Five Hundred Thousand United State Dollars only for You (2012), a group of 25 small acrylics on canvas, in which the text of a spam message imperceptibly morphs into an economic plan. Horizontally aligned, the paintings are roughly the size of a page; in the first one, the text is painted in white on black; this gradually shifts through shades of grey into black on white. In the photographic series ‘The Future in Their Hands (The Visible Hands)’ (2011), the artist asked an Indian palm reader to decipher the personalities of six leading chairmen of banks. The palm reader had to use pictures of their hands, which had been shot while they were taking an oath during a public trial – a sardonic twist on philosopher and economist Adam Smith’s metaphor for the self-regulation of markets (the ‘invisible hands’) as well as on the limits of interpretation.

Another of Correale’s incursions into the constructions of identity is music. Once a bass-player in a hardcore metal band from Naples (the name of which the artist now prefers not to disclose), he spent years collecting samples of underground aesthetics and beats (an archive he partially exhibited at Chan, an independent space in Genoa, in 2009, under the title ‘How Much Art Can You Take?’), while last year he travelled to North Africa to collect and record protest hiphop. In 2012, Correale was selected by the Colombian collective Helena Producciones to participate in the group’s Performance Festival, held in Cali, Colombia, where he shot the first steps of a new video project, provisionally titled Capitulo Uno (Chapter One). Salsa music rules in the video; it’s the subject of several interviews and conversations with local people, who analyze its role in the construction of a shared language, history and imaginary of Latin America. ‘Welcome to the Suburb of Aguablanca,’ says one of the people he interviews, who then declares that the community-based radio Oriente Estereo, ‘communicates, broadcasts, forms, informs and disinforms.’ It’s the subversive power of semiotics over and over again.

Danilo Correale was born in Naples, Italy, and lives and works in London, UK. He studied at NABA, Milan, Italy. Recent solo shows include: ‘We Have a Business Proposal of …’ at Raucci/Santamaria, Naples, ‘The Warp and the Weft’, Peep-Hole, Milan (both 2012), and 'Pareto Optimality' at Supportico Lopez, Berlin (November-December 2011). His work has also been shown in group exhibitions including: ‘Sotto la strada, la spiaggia’ (Beneath the Road, the Beach) at Fondazione Sandretto Re Rebaudengo, Turin, Italy; ‘Enacting Populism’, at Kadist Art Foundation, Paris, France; and the Moscow International Biennale for Young Art (all 2012).