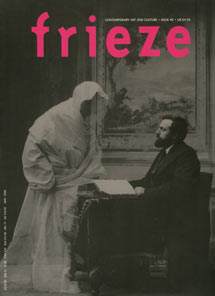 Bacon's work doesn't comply neatly with attempted divisions between portraiture and explorations of the body, and this exhibition, 'The Human Body', is to a degree an artificial contrivance, especially for an artist who in many ways considered the head as just another limb on a torso. The works are hung strangely close to the floor in the Hayward's artificially lit lower galleries, against sad, grey walls and a threatening dark ceiling. Light levels are low because of the artist's improvidence of technique and the consequent delicacy of the work: the raw canvas he left exposed is vulnerable to darkening and embrittlement. Overall, the repressive effect makes the works look gaily pretty and cheerful.

This is the first significant opportunity to consider Bacon's work since Michael Peppiatt's critical biography of 1996, and makes the artist's rigid withholding of his co-operation from any biographer understandable. Peppiatt is not party to the strange collaboration between those that accord the artist a greater singularity than is the case, and he makes an evaluation of Bacon that is neither characterised by either adulatory homage (to a Soho Disneyland of romanticised Existentialism) nor by kneejerk disgust. His book is more fondly querying of Bacon's art than his many (equally committed but perhaps more constrained, credulous, or misinformed) predecessors. David Sylvester, who curated this exhibition and wrote the catalogue essay, has begun - just - a well-earned relaxation from the artist's royal grip.

Details of Bacon's upbringing, sexuality and relationships have autobiographical correspondences in the paintings which make them (in what would be an absolute anathema to the artist) much more narrative than intended. Bacon's deliberate insistence on a non-analytical and non-narrative reading of his work (and potent enigma resulting from this), is now less possible to sustain. For example, Untitled (1943 or 1944), a work never exhibited or published before, (a variant on one of the triptych panels for Three Studies for Figures at the base of a Crucifixion, 1944) seems particularly hectoring. Elsewhere, Bacon's narrative is by degrees inarticulate and confused, but certainly present. This is most clearly seen in Triptych May-June 1973 (1973). The painting depicts the undignified suicide of the artist's lover in cartoon strip style. The spiritual details of Bacon's story of abuse, repressions and counter-repressions may be seen, with increasing clarity, elsewhere in the show.

Bacon's outlook of religiosity (both absolutist, irreducible intent and frequent religious subject matter), politics and sexuality (of pain) may now be considered without constraint. The various biographies, newly revealed work and the simple passage of time allows us to consider him in relation to various traditions other than just a Modernist one. These might include the art of the right wing, 19th century Christian art, as well as the history of artists concerned with sexualised control, such as Richard Lindner, or even Aubrey Beardsley. Bacon's use of raw canvas left in reserve is like Beardsley's use of white paper, seen in his illustrations of Edgar Allen Poe, for example. There may even be a case for consideration of Bacon in relation to the English nonsense tradition in literature.

Bacon's often very beautiful, grandee swirlings and sexualised skidmarks of paint are depictive of certain principal categories of subject. These are either other right-wing libertines like himself, or suicides and alcoholics - alcoholics, of course, just being suicides in slow motion. The libertine theme, and its policy of non intervention toward the emotionally or spiritually disadvantaged, can be seen in the falling freemarket of souls on the canvases, and their hierarchy of vulnerabilities in relation to each other, reflected within the structural devices the artists used.

The good paintings in this show have a continuing magic power, effecting an almost involuntary response. As Bacon's often strained theatrical intensity becomes more painfully obvious though, his successes may perhaps be due more to his fabulous colourist skills and consummate fluency with paint than his existential pronouncements. As the duration of induced sensation in the viewer becomes diminished, through habituation and an increased tolerance to his devices, either complacency or a discriminating embarrassment at the accrued defects in the paintings sets in.

Bacon's insistent references to Paul Valéry's - 'the sensation without the boredom of its conveyance' - is seen reflected in the repeated significance of 'sensation' in much contemporary art practice, and its analogues in advertising, recreational drug use and the entertainment media. Bacon's outsider status, ruthless survival strategy and self mythologising, as well as his great talent, also have correspondences in younger artists' makings and marketings of art, although many of these are now safely institutionalised themselves. The bonds between Bacon and many contemporary artists may expose those working in his wake to stresses and counterbalancings dependent on the rise or fall of his retrospective fortunes.