BY Barbara Casavecchia in Reviews | 24 FEB 17

B
BY Barbara Casavecchia in Reviews | 24 FEB 17

It all starts with an unreadable story. On 2 April 2013, Gian Maria Tosatti began writing a diary about the cycle of environments, Sette Stagioni dello Spirito (Seven Seasons of the Spirit), which he went on to create over the following three years in seven abandoned buildings in the centre of Naples. They were: the small church of Saints Cosma and Damiano at Banchi Nuovi, the ex-Municipal Register Office in Piazza Dante, a giant warehouse overlooking the harbour, the former military hospital, the ex-convent of Santa Maria della Fede, an old workshop in Forcella, and the church of Santissima Trinità. Written on an old typewriter, Tosatti’s diary is now enshrined in a glass vitrine, like a relic. Displayed in the first room of this exhibition, which is staged as a reconstruction of the artist’s Neapolitan studio at Fondazione Morra, it embodies the problem of how to exhibit durational artworks. In the adjoining room, a documentary video follows the artist throughout the project.

Curated by Eugenio Viola, each ‘season’ was temporarily open to the public, although only one person at a time was admitted and, to encourage personal exploration, no guidance was given. Tosatti cleared piles of dust, painted and gilded walls, rearranged found objects and brought his viewers, step by step, from darkness to light. The last iteration provided a paradisiacal small garden inhabited by plants and singing canaries.

Sette Stagioni dello Spirito references El Castillo Interior (The Interior Castle, 1577), a book in which Saint Teresa of Ávila describes the seven inner ‘mansions’ through which the soul must pass in order to meet its own divinity. Tosatti created an allegorical journey from evil to good, not unlike Dante Alighieri’s Divine Comedy (c.1320), casting himself in the difficult role of artist as miracle worker in reaction to what he perceives as a dramatic crisis in art’s public function and as Italy’s decline. 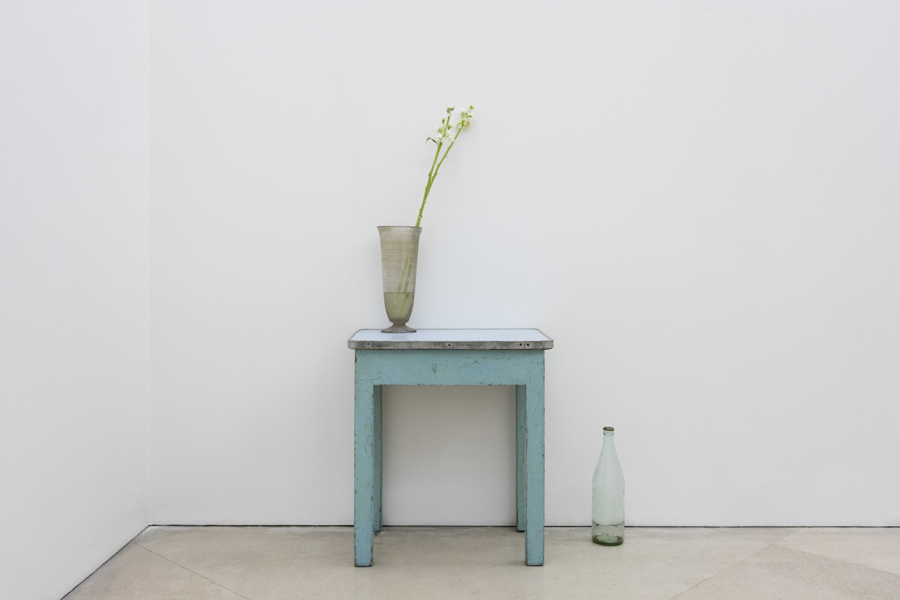 Joseph Beuys is clearly a precursor: the second section of the exhibition, on the museum’s second floor, is introduced by the fresh jasmine flowers of 4_Ritorno a casa – archeologia (tavolino con fiore e bottiglia), (4_Back home – archaeology [small table with flower and bottle], 2015), which is installed next to Beuys’s militant silkscreen La rivoluzione siamo noi (We Are the Revolution, 1971), a highlight of Museo d’Arte Contemporanea Donnaregina’s (MADRE) permanent collection. It’s here that the show unfolds, in the form of a linear sequence of rooms. Each one is identified by a monumental gold number and introduced by an extended caption that replicates the artist’s diary typeface (no titles are provided for the individual works). Tosatti restages fragments of the original installations, together with large photographs, small Polaroids and old slide projectors – in his world everything is strictly analogue – and large drawings that evince a strong interest in set design.

Theatre is a key reference for the artist, who, in the early 2000s, studied at the Centre for Theatrical Research and Experimentation in Pontedera and who considers Italian theatre director and playwright Romeo Castellucci as his master. But, as with theatre, the retrospective documentation of a live event isn’t straightforward. In the immaculate rooms of the museum, the emotional charge of Neapolitan life feels absent, somehow disembodied, despite the sculptural presence of objects such as desks, empty cupboards, piles of broken glass and watches. Though the sixth ‘season’ involved a month of intense work with the local community in Forcella, one of the most dangerous and impoverished areas of inner-city Naples, visitors to MADRE are met only by the rusted door of the space, riddled with bullets, presented like a portal to another dimension – but one that was too silent and self-contained to lead me to ecstasy.

Opinion
Reasons to Be Optimistic: How Italy’s Art institutions Arose from the Pandemic

EU Reviews , Reviews
A Group Exhibition in Rome Imagines the Museum as Magazine

Ahead of his new work, filmed on a boat in Venice, an interview with the Italian auteur

Features
Four Artists to Watch in 2020