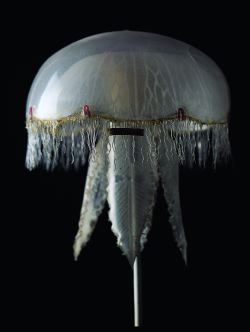 Wandering around the National Museum in Cardiff on a damp day, I recently came across a room of objects (between the Italian Renaissance and Pre-Raphaelite sections) which I had no means of classifying. Resembling gelatinous hand-sized beasts, they looked like very weird light-bulbs variously equipped with harpoons, carnival head-dresses, spiky afros, and umbrellas. On close inspection they were recognisable as marine species; closer still their squashy, gooey flesh turned to glass - glass fashioned by the hands of true masters.

But the Natural History displays were downstairs, as was a large part of 'The British Art Show 5', while I was amongst the Fine Art and Decorative Arts displays. The glass beasts shared certain attributes with each of these types of artefact, while not entirely relating to any at all. Remembering the old adage 'if all else fails, try the instructions', I turned to the wall texts, which revealed that it was an exhibition of work by Leopold Blaschka, a glass craftsman of Venetian extraction born in northern Bohemia in 1822, who worked in collaboration with his son Rudolf. Leopold began his career in a workshop in Dresden, making metal and glass jewellery, as well as glass eyes for the blind and to supply the burgeoning trade in taxidermy. He shared his contemporaries' fascination with the relatively new science of Natural History, a branch of knowledge that had been developing on the back of colonial expansion. Like many other amateurs, Blaschka pored over beautifully illustrated books of the other-worldly realm of life beneath the sea.

It was around this time, during the early Victorian era, that new museums were opening up all over Europe, making accessible the spoils of war, exploration, and colonial endeavour to a general audience (previously such artefacts had been the sole preserve of aristocrats and professional experts). These were bullish times for taxidermists and makers of glass eyes. Fish, along with mammals, could be stuffed, but what to do with the all those wondrous creatures of the sea without skeletons whose bodies would lose all colour and shape when pickled in spirits?

Studying the plates of recent volumes, such as G. B. Sowerby's A Popular History of the Aquarium of Marine and Fresh-Water Animals and Plants (1857), Blaschka noticed a similarity between the bodies of these sea creatures and some of the effects he was able to achieve with blown and painted glass. Firstly, he attempted to make some anemones: highly coloured, mushroom-like plants covered in tiny suckers. Within a few years he'd moved on to jellyfish, squids and octopi. Word soon got out, and Blaschka was getting calls from international museum curators. As a marketing and administrative tool, he and his son began producing catalogues of hundreds of species, all available to order. London's Science Museum made a bulk order of around 500 models in 1877. The fledgling Cardiff City Museum placed their own order in 1890 for around 130, later supplemented by 60 or so from the Science Museum when the latter dispersed their entire collection in 1927, by which time the models had fallen out of fashion.

In a period of just over 30 years the father and son team made thousands of these astonishing pieces - squids, sea-slugs, starfish, bristle worms, sea cucumbers, common cockles, cuttlefish, dead men's fingers, and sea squirts - some of them in multiple editions. Sea-slugs were especially popular - the Blaschkas offered 150 varieties. The verisimilitude of their jellyfish models was especially satisfying: the Blaschkas could create the effect of jellyfish bodies with two pigmented glass membranes, painting veiny markings on the inside of the glass to achieve a sense of translucent, fleshy depth. Pre-eminent amongst these is their flashy Portuguese Man-of-War who sports a show-stopping ensemble of coloured tentacles hanging on minute wire armatures. While most of the models are life-size, the Blaschkas' passionate scrutiny of their subject matter is evident in species shown dissected, representing three stages of growth, or showing extreme enlargements of certain details. Their hugely magnified models of pond amoebas are punky spheres entirely covered with long, thin spikes.

No catalogue of the Blaschkas' work has ever been made, yet perhaps the time is ripe for more of these strange and beautiful objects to emerge, not only from dusty museum storerooms, but from the cracks between the old Enlightenment categories of knowledge. Today, they would find kindred spirits in contemporary sci-fi and horror imagery, or, indeed, amongst the objects of contemporary artists making similarly virtuoso simulacra of what we consider to be nature's aberrations.