Aside from its delightful friendliness, the Zurich I moved to nearly 20 years ago was hardly different from other small cities in affluent European countries. Things were dull during the day and at night there roused what adults referred to as the ‘underground scene’ (but which really meant anyone under 30). There were empty houses, factories and cheap apartments with poor insulation and lousy radiators. Young people, though bored by the small city, were relatively free to discover what they wanted to be one day, in adulthood’s distant future. They founded theatre collectives, painted, rented galleries, put on ridiculous performances, held amateur concerts, showed each other shaky black and white films, and were legion.

Grandfather tells us about the war. Zurich looked like Hamburg, Berlin, Prague and Moscow in the ’90s. The turbo switch had yet to be flipped. Instead, there were other problems. Drafty apartments, for example.

What’s currently happening everywhere else is happening in Zurich, too – land is expensive and the world is too full for anyone to risk sentimentalities or experimentation. Zurich’s Löwenbräu Areal is a wonderful case in point of the world’s transformation into one efficient, profit-producing machine.

In 1996, museums and galleries moved into the former brewery. Its gated campus was, until 2011, one of the last pseudo-creative urban places in the city. I say ‘pseudo’ because the Löwenbräu empire had, of course, always meant money – important collectors, valuable paintings and so on. But at least you could feel just a tiny bit subversive at the courtyard parties, or in the atelier of the Migros Museum, where the artists worked. Vernissages at the Areal were where you could meet everyone that you, as a young person, wanted to meet, where you hunkered down on the stairs and chain-smoked – the excesses were legendary. 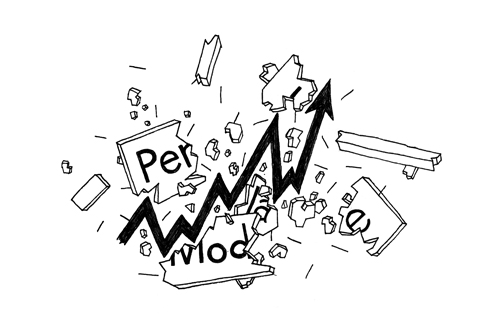 When the property changed hands the dreams of sweaty-palmed real estate moguls were finally realized: the Löwenbräu Areal was reconstructed in the most unspectacular manner. Built upwards, with expensive condos, the courtyard was filled with absurd excuses for trees. Museums and galleries remained open with the help of the city. The new rents are dizzyingly high. The wing of the Areal that now houses art looks exactly like the galleries in the equally unaffordable districts of Manhattan, Paris, Oslo, or elsewhere. Exposed concrete, concrete floors, concrete ceiling, concrete what have you – all very spiffy. Following the inauguration of the new rooms, the audience, too, changed drastically overnight. It’s a dapper audience, visibly affluent, as groomed as young dual-income couples anywhere in Europe. Gone are the smoking freaks; everything, everywhere is manicured. In this way, Zurich is no different than any other place in any other industrialized nation. Professionalization permeates all aspects of art, driven by the economic realities of our era. In other words: sell, or else. Like in all other hyped fields, there is barely room for newcomers in the international art scene. Rarely does talent go undiscovered by the economy. The art that survives adjusts itself to the demands of the market, consciously or otherwise. This sounds like a bitter and tired critique of capitalism but is really nothing more than a small sigh. And aren’t there advantages to having art tailored to the needs of the market? Erm. For example, —––.

Zurich, like all cities that can afford it, has a comprehensive programme of cultural funding, thank you very much. But do we really want to discuss art funding programmes? No, we don’t.

Let’s continue our survey of what else there is to do in the city. There is a dance centre, several small theatres, a city theatre, an opera house, everything’s fine. Here and there they put on shows – never groundbreaking, but solid. There’s the Dada Haus, there used to be the Binz, some small discussion rooms, all very charming – but first and foremost the city is home to some of the world’s most lucrative galleries. Zurich and galleries, that’s certainly the first, and perhaps the only, thing that comes to mind on the topic of culture in the city. They fit together marvellously. They are so … efficient. In all things money, on all levels. For our social lives, this means always seeing the same people. Collectors, artists, theatre people … Well, ok, not them. Theatre people usually aren’t interested in anything besides – well, theatre. Gallery openings are Zurich’s monthly family reunions. We see each other there and at funerals. Count on it, at the Löwenbräu, at Presenhuber and Freymond-Guth, at Francesca Pia and Staiger. Until recently, the culture family also had a short-lived and bold stint at the nascent galleries in the redlight district. But that barely exists now (land prices, you know) and the young galleries either graduated into the establishment, or – but more about that later. Zurich locals, and I’m going to make a generalization here, are not excessively enamoured with culture unless there’s a lot of money to be made. Or it consists of opera – but nothing too crazy.

Inasmuch as they still exist, the tiny and wild art collectives that occupy buildings are regularly squeezed out by construction projects with high rates of return. No clue how many young painters, theatre people, performers and filmmakers have left for Berlin in the last ten years, though I think many. Zurich is too expensive for experiments. Every millimetre is put to use, scrubbed, swathed in concrete – but even in this way our little city is in line with all her older European sisters. There’s no state-supported health and social security scheme for artists in Switzerland, no tax breaks for young creatives, only the opportunity to move to the Jura mountains, where it’s still halfway possible to live halfway affordably. Until the developers claim this out-of-the-way patch of Switzerland for themselves, too. Many stars of the art scene no longer live here. Peter Fischli, Pipilotti Rist and erm, what’s-her-face, are the only ones that aren’t constantly switching full-time residences between Berlin, LA, and New York. Otherwise one simply moves away for good. Not because Switzerland is so terrible, but because all the others left already and there’s no lively artist scene in Zurich – lively in the sense of magnificent for networking, since everyone is too busy trying to survive. Zurich is a microcosm in a worldwide trend. A city in which one can consume wonderfully but one that lacks a need-it-to-breathe interest in the immaterial, in which art increasingly consists of that which is amenable to the masses, in which fine art is an investment opportunity. That’s just the way it is. Theatre here, like in most places, is searching for a new identity. Movie and book adaptations are the big thing at the moment, allowing directors to realize themselves without writers butting in. Since the emergence of the Belgians, the dance world produces something spectacular every now and then, but without significant innovation, barring the development of transforming ballets into events, like Swan Lake Reloaded.

Above all, events are beloved in Zurich. Drummers and steppers, folk festivals and excuses for drinking – they all align with the contemporary desire to earn money – heaps of money with which to buy real estate. I’m not whining. I’m observing. It’d be a lie to say I’m whining. Most likely I’m finding it difficult to bid adieu to the familiar, like all over-40s. Like bidding adieu to Perla-Mode. And now we’re back at the beginning. Esther Eppstein’s small guerilla gallery has been showing art exhibitions, performances, and events in hijacked rooms for 20 years. Perla-Mode will soon scoot aside to make room for some whatyamacallit, some development. That’s just how it is. I’ll get used to it, humans can get used to anything. If film today means American TV series, books mean well-behaved experiments in family therapy, fine art means ‘sellable’, and theatre means adapted American TV series, then maybe a new guerilla thing is just around the corner. The hackers, the botanists, the evening stroll or the contemplation of empty walls, everything will sort itself out. It’ll be different, it’s never been better than now, maybe we’ll all be dead soon. This concludes my entirely personal cultural report from Zurich, the city with the highest quality of life anywhere in the world, and the place that is more comfortable than most I know. But to experience exciting culture, I recommend a trip to – well, nothing comes to mind at the moment.
Translated by Yana Vierboom

Sibylle Berg is a novelist and playwright, born in Weimar, who lives in Zurich. Her novels include Ein paar Leute suchen das Glück und lachen sich tot (Some People Search for Luck and Die Laughing, 1997) and Vielen Dank für das Leben (Thanks Very Much for Life, 2012). She wrote and directed the production Angst reist mit (Fear on Board) which was staged at Staatstheater Stuttgart in 2013. She writes the regular column Fragen Sie Frau Sibylle (Ask Mrs Sibylle) for Spiegel Online.