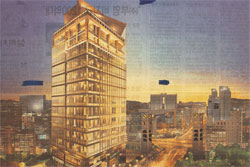 In his book Unavowable Community (1983) Maurice Blanchot finds ‘community’ in the distance between human beings. Korean artist Haegue Yang reflects on this notion in her recent exhibition ‘Unevenly’ at BAK, Utrecht, searching for ‘a community of those who do not have a community’, that is characterized, according to the press release, by ‘heterogeneity, ongoing self-examination and a recognition of its own vulnerable and transitory nature’.

For Series of Vulnerable Arrangements (2006) Yang gathered an incongruous group of large modified electrical devices in BAK’s main exhibition space. Ranging from electric heaters to fog machines and scent dispensers, these appliances clicked on and off at intervals, triggered by the movements of visitors, releasing intermittent bouts of warmth and faint wafts of vapour. Bearing no particular relation to one another, the objects appeared as an oddly animated group, connected by a sprawling system of wires and a shared power source, giving visitors common sensory experiences.

The displacement of everyday objects is a regular feature of Yang’s work, as is her reflection on the conditions under which they have been brought together. In 2004 Yang was faced with the return of a number of her works from different locations around the world, and the fact that she had nowhere to store them. At the same time she was offered a space to exhibit in, so she resolved the situation by shipping all of the works to the gallery and stacking them, unpacked, on a pallet to form a new work. Storage Piece (2004) suspended these works in limbo between arrival and departure as a wry reflection of her own personal circumstances.

Yang’s video works offer a more intimate take on the life of an artist for whom mobility is a necessary condition. Installed behind screens at BAK, Unfolding Places (2004) and Restrained Courage (2004) form the first two parts of a trilogy of video works that mixes documentary footage with introspective scripted narratives, recited as monologues by anonymous voices that might stand in for Yang herself. Shifting between everyday scenes in public spaces in cities such as Seoul, Frankfurt, Amsterdam and London, a narrative unfolds in which the subject recounts isolated incidents that reveal her disjointed relation to her environment. The artist’s sense of alienation marks each of these encounters; people getting lost or publicly abused are met with her silence. Footage of strangers on the streets, views from windows, flickering lights and brightly coloured origami sculptures floating in puddles are narrated obliquely, reinforcing the slippages between subjective and objective, public and private, in the separate lines of voice and image.

In the final part of the trilogy, Squandering Negative Spaces (2006), Yang travelled to Brazil – a country she was unfamiliar with – in search of ‘a community of absence’. This time the artist intended to use her position of ‘otherness’ in order to investigate the process of approaching a foreign culture from the outside. Yang’s camera follows a succession of unremarkable in-between spaces, puddles and stray objects, bringing to mind Blanchot’s notion of a community that finds freedom in moments of disjuncture and rupture. Her accompanying thoughts again stray from the trodden path and resist assimilation; every now and again they wander back to Korea, revealing a tension between the immediacy of the unknown and the over-familiar.

Far from the cracks and urban detritus of Brazil, a very different model of community is portrayed in Dehors (Outside, 2006), a series of slides reproducing full-page Korean newspaper advertisements of drawings of future apartment complexes. Photographed against the light, other articles from the newspaper show through the image from the reverse side. These obscured depictions of gleaming sci-fi towers reveal a constructed idea of community that is similarly imagined but at the same time entirely absent from the minds of developers, begging the question as to whether a social structure can be arrived at from the top down.

While the perpetual mobility and lack of belonging in Yang’s works create detached, melancholy narratives, the non-arrival seems also to produce a thought process that prevents things from becoming bound. Objects are not kept in fixed positions but are removed from their contexts and realigned in different relationships. It is this sense of disjointedness, in which the connections among things and people appear not naturally or orderly but ‘unevenly’, that gives an openness to Yang’s work and allows the idea of a ‘community of those who do not have a community’ to emerge.