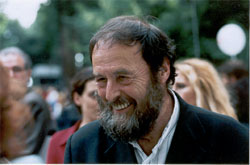 For me, since 9/11, there has been a daily ritual commemoration of the dead. I seem to be surrounded by death. Everything seems to make forgetting impossible. There is a growing voyeuristic detailed description of the terror of death via the media; and the more I consume, the less I grasp. Death as an incomprehensible phenomenon has produced a certain numbness in me and then I am told that a friend of mine for over 30 years has died and I am asked to write a few words. Writing is one form to seek compensation for loss. Death is an all too human fact. You don’t only live out your life, you also live out the lives of your contemporaries. Their mortality affects your living, your daily measure.
Harry was a great man who supported art and artists unequivocally his entire life. For decades he was able to pull forth meaning where others would only find absence – that is, he gave all artists the benefit of the doubt. The last time I was with Harry I laughed so hard I cried and that is the way I want to remember him.

The curatorial work of Harald Szeemann was highly complex and cannot be seen as having just a single aspect. For me his exhibitions in Zurich – and above all Der Hang zum Gesamtkunstwerk (The Tendency towards the Total Work of Art, 1983), which I visited every day while still at school – were formative experiences. This was due in part to Szeemann’s notion of the exhibition as a toolbox, as an archaeology of knowledge in the spirit of Michel Foucault. Whether he was showing Artaud, Gaudí, Schwitters, Steiner or contemporary artists, Szeemann accomplished the rare feat of bridging the gap between past and present. He tested out so many different modes of exhibiting, as well as curating many important solo shows: Beuys, Delacroix, De Maria, Duchamp, Merz, Nauman, Picabia, Serra … The 1985 Mario Merz exhibition, in particular, made a particularly lasting impression: Merz and Szeemann removed all the walls inside the Kunsthaus and displayed the work as an open field, with Merz’ igloos shown in the resulting space as a visionary and Utopian city: La Città Irreale.
Szeemann also saw his exhibitions as an ‘archive in transformation’. To me this was just as representative of his approach as the fact that he worked simultaneously as an independent curator and curator of Kunsthaus Zürich. Another important facet of his career was the way he oscillated between large and small, private and public. After the 1972 Documenta in Kassel, for example, there was the exhibition dedicated to his grandfather, held in a private apartment in Bern, with no hierarchy between the larger and the smaller show – entirely in keeping with Robert Musil’s observation that art can appear where one is least expecting it. Szeemann’s death is a major blow to the art world.

1 One of the most interesting books on this subject is L’art de l’exposition. Une documentation sur trente expositions exemplaires du XXe siècle, Paris: Editions de Regard, 1998